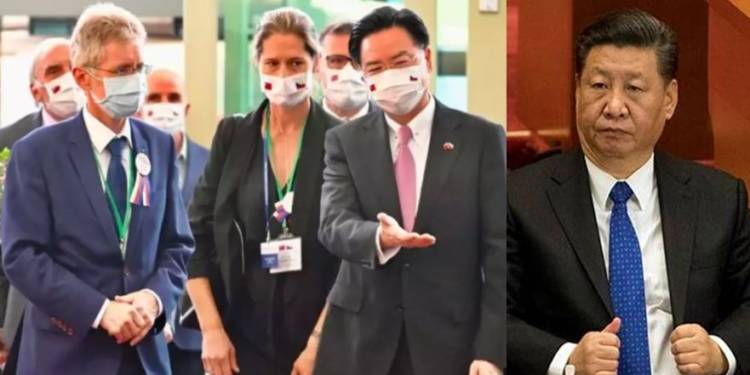 The Czech Republic, a country in Central Europe, has sent more than 80 representatives from government, business and academia to Taiwan, the island country which China claims as its part under One China principle. The delegation included President of the Czech Senate Milos Vystrcil and Prague Mayor Zdenek Hrib who reached Taiwan in a chartered flight.

Taiwanese Foreign Minister Joseph Wu greeted the delegation at Taiwan airport despite protest from China and the group is supposed to meet Taiwanese President Tsai Ing-wen, who is detested by Beijing for her assertions of the independence of the island.

The six-day visit by Czech delegation has rattled China; the Chinese foreign minister condemned the visit and said, “China condemns this despicable act and urges the Czech side to abide by the one-China principle and handle Taiwan-related issues in a prudent and appropriate manner.”

This visit is anticipated to be the first step towards the Czech Republic’s recognition of Taiwan as an independent country. Global Times, the English language mouthpiece of Chinese Communist Party published an editorial with the title- Czech politicians’ ‘visit’ to Taiwan will only harm Czech’s own interests- and argued that, “This will do nothing but harm the Czech Republic’s interests. The Chinese mainland is far more important to the Czech Republic than is the island of Taiwan.”

The Global Times also linked the visit to US-China decoupling quoted Lü Cuncheng, a research fellow at the Institute of Taiwan Studies of the Chinese Academy of Social Sciences in Beijing saying, “Vystrcil’s visit to Taiwan has a strong connection to current China-US ‘decoupling”  to support the argument.

The Czech Republic, led by anti-Communist and pro-Trump Prime Minister Andrej Babis, has traditional European balancing towards China and has openly spoken against Chinese authoritarianism. In defiance of China’s belligerent stance, the little land-locked European nation of the Czech Republic has always been at the forefront. The Czech Republic has been poking the dragon in the eye for a while now, and one of the most interesting things about their resistance against China is the reference to the Tiananmen Square massacre in signages erected in Prague. This has been done so that the world and especially, Chinese civilians do not forget the horrors of the communist state.

Prague’s Mayor, Zdenek Hrib, who is also among the visiting delegates, has repeatedly wrestled with China and has not been shied away from giving a piece of his mind to Beijing. Since assuming the power of the capital city–the mayor has condemned China as an ‘unreliable partner’, criticized its treatment of ethnic minorities like Uighur Muslims, and promoted ties with Taiwan by meeting Chinese dissenters.

The visit by Vystrcil comes in the backdrop of China issuing stern warnings to the Czech Republic since January this year over a range of issues. According to Vystrčil, the decision of his to undertake a visit to Taiwan was driven by the fact that China was pressuring his country repeatedly, apart from issuing a warning to the lawmakers against congratulating Taiwan’s President Tsai Ing-wen on her re-election. “The People’s Republic of China believes it has a right to tell us what to do,” Vystrčil said.

Kubera, the previous Speaker of Czech Senate was due to visit Taiwan in February this year, however, he died in late January after a visit to the Chinese Embassy in Prague. Jaroslav Kubera, three days before his sudden death, had visited the Chinese Embassy for dinner, during which the Chinese ambassador requested a “private conversation” with Kubera. Kubera emerged angry and frustrated after the private meeting and asked his wife to not eat anything at the embassy.

Many people have argued that China has a role in Kubera’s death, and therefore, Vystrcil’s visit is a befitting tribute to the memory of Jaroslav Kubera, who died in mysterious circumstances before his Taiwan visit.

Canada makes it clear that it is not going to release Huawei CFO. Kicks China out of Vaccine trial