‘People want Law & Order’, Democrats’ love for lawlessness is going to haunt them back

A landslide victory for Trump ahead 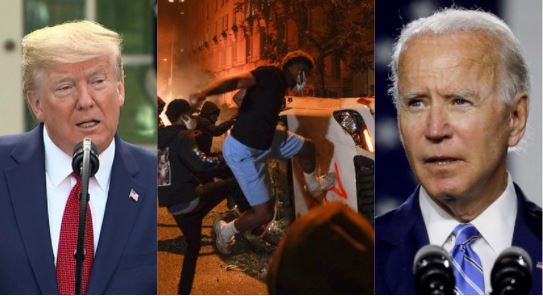 If the Democrats thought that the ‘Black Lives Matter’ protests would help them topple President Trump during the upcoming US Presidential polls, then their myth seems to be getting demolished pretty quickly. Two Democrat-ruled cities- Portland and Kensoha, are on the boil in the garb of BLM protests. And President Donald Trump is now making this a major election issue.

Trump is now coming down heavily on Democrat Mayors while making law and order a key election issue. In a tweet directly aimed at Portland’s Democratic Mayor Ted Wheeler for the “death and destruction of his City.” Trump has also made it clear that neither the “Radical Left Democrat Mayors” nor the “the guy right now in his basement unwilling to lead or even speak out against crime (Democrat nominee Joe Biden)” would be able to bring “Law & Order”.

..The people of Portland, like all other cities & parts of our great Country, want Law & Order. The Radical Left Democrat Mayors, like the dummy running Portland, or the guy right now in his basement unwilling to lead or even speak out against crime, will never be able to do it!

Trump’s hard-hitting remarks come in the background of some very disturbing developments in both Portland and Kensoha. Portland itself has been by gripped by violence since June shortly after the custodial killing of George Floyd, an African-American, by a Minneapolis police officer.

However, the Portland Mayor Ted Wheeler has been encouraging protesters instead of calming tempers. In June, he even turned up at a protest organised against the deployment of Federal agents in Portland by the US President Donald Trump. Wheeler had himself got tear-gassed when he turned up at the site of the protest.

Now, the protests have taken a turn for the worse. BLM protests were supposed to stand up against anti-Black racism but now it has got reduced to a radical left-backed spree of violence in Portland. A man was reportedly shot dead during the Portland riots. The victim is believed to be the supporter of a far-right group, Patriot Player whose founder identified the victim as “a good friend and a supporter.”

Moreover, it has been reported that a “camouflage gear” with “thin blue line patches” was recovered near the body- a sign of support for the Police.

A seemingly anguished Trump thus tweeted, “Portland will never recover with a fool for a Mayor.” He has also said that Wheeler “tried mixing with the Agitators and Anarchists and they mocked him.”

But Portland is not the only city on Trump’s radar. He is also poised to visit Kensoha in Wisconsin on Tuesday. Kensoha has been rocked by violence following the police shooting of Jacob Blake in the back on August 23, which left the African-American man paralysed.

Trump’s visit to Kensoha comes amidst a complete breakdown of law enforcement machinery in the city. If Portland is facing a mockery of law and order, Kensoha has plunged into absolute lawlessness. Videos of rioters getting into a confrontation with armed citizens who are out on the ground to prevent looting and crimes against local businesses are enough to illustrate how law enforcement has fallen apart in the Wisconsin city.

Rioters are getting into confrontations with armed citizens who are out here to prevent looting and destruction to businesses. pic.twitter.com/f65YkP24kG

Loss of human life has happened in Kensoha too. A 26-year old man identified as Anthony Huber succumbed to a bullet wound last Tuesday during the riots that broke out in the city.

While Kensoha is witnessing unprecedented death and destruction, the Wisconsin Governor Tony Evers has come under fire. White House Chief of Staff Mark Meadows accused him of turning down Federal help from President Donald Trump to quell violence in Kensoha. The refusal reeks of the Democrats’ absurd stance of not taking Federal help even when they are not able to manage cities that are being constantly plundered by far-left rioters.

Meanwhile, the Democrats continue to take the law and order issue casually. Biden is accusing Trump of “recklessly encouraging violence” without anything to back his outlandish allegation. Meanwhile, the Kensoha Mayor John Antaramian doesn’t want Trump to visit the beleaguered city at “this point in time”. The democrat leader seems to realise that Trump’s visit will send a strong pre-poll message to American voters, lending more popularity to the US President.

Trump has emerged as a “law and order” President which is going to power him to a major victory because Americans tend to tilt towards conservatism whenever the US is gripped by riots or street violence. Trump knows people want to get rid of the existing lawlessness, which is why he said, “The people of Portland, like all other cities & parts of our great Country, want Law & Order.”

Democrats have made a huge mistake by betting heavily on BLM protests even after they turned violent. Come November 3, the American Presidential polls would get sealed in Trump’s favour.