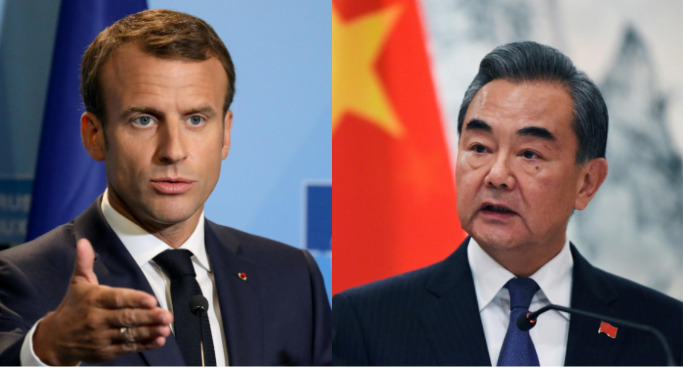 It seems that the US President Donald Trump is hitting China right where it hurts the most as Chinese officials led by Foreign Minister Wang Yi have embarked on a damage control Europe tour which has so far turned out to be a complete disaster. Upon arriving in France, Wang Yi yet again went on an anti-US rant only to get royally snubbed by France, which in turn, brought up China’s poor human rights record in Hong Kong and Xinjiang, resulting in a major embarrassment for China.

Wang Yi and other Chinese officials have embarked on a Europe tour in a desperate bid to help Beijing’s efforts of confronting the USA. At a time when the US is moving forward in a menacing way to decouple from China, the latter has appealed to jointly confront “extremist forces” in the United States who are pushing for “decoupling”.

After arriving in Paris, Yi lamented how “we never talk about ‘China first” which is seen as a rebuke to Trump’s “America First” slogan. In a speech at the French Institute of International Relations, Yi said, “At present, China-US relations are in the gravest situation since diplomatic relations began … [with the US] publicly coercing other countries to take sides and attempting to push Sino-US relations into conflicts and confrontations.”

Yi added, “At this critical juncture of human development, based on responsibility for the fate of human destiny, China and the EU should jointly resist any counter-currents inciting hatred and confrontation.”

The main objective of China’s European tour was to safeguard Chinese technology and promote the 5G technology which will further increase China’s soft power. It seems that the objective of the trip has now taken a turn and is aimed at allying against the US as it appears that Xi Jinping is now more scared of the US than China’s diminishing 5G tech.

Yi strategically chose to deliver the strongest anti-US remarks of his trip in France as the latter is looking to reduce its reliance on the US. However, Yi’s remarks yielded precious little as his French counterpart, Jean-Yves Le Drian bringing up China’s Achilles’ heel.

According to a French Foreign Ministry statement, “The minister reiterated [France’s] position on respect for international law in the South China Sea. The minister recalled France’s serious concerns about the deterioration of the human rights situation in China, in particular in Hong Kong and Xinjiang.”

The statement is quite significant with Yi ending up with egg on his face. China’s controversial national security law has grabbed the global limelight as China attempts to add Hong Kong’s autonomy. China is committing unspeakable atrocities on the Uyghur Muslims in Xinjiang perhaps copying from Hitler’s playbook. Even the leaders of the Muslim Ummah have shied away from commenting on Xinjiang, and hence, France’s statement is significant and has geopolitical ramifications.

China has refused to respect the verdict of an international tribunal and continues to violate the sovereignty of other nations in the South China Sea as it falsely claims to have the sole right on almost the entire South China Sea based on “historical grounds”. South China Sea has turned into a battleground with the US sending its warships and it is clear on whose side France intends to stand when it comes to the South China Sea.

It is pertinent to note that last year, French President Macron had said, “The time of European naiveté towards China is over,” suggesting that Paris would toughen its stance against Beijing.

France is just the latest embarrassment as Wang Yi has met with uncomfortable questions in almost every European country he has visited as Yi was forced to assuage the concerns over the national security bill.