After years of silly open-door policy, Europe witnesses a surge in movements against Radical Islam 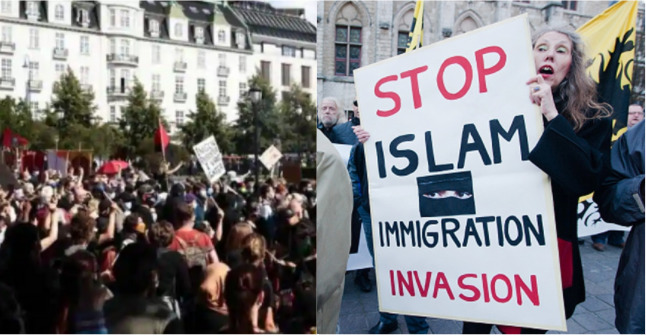 Europe, which once tooted its own horn of liberalism by welcoming refugees from the war-torn areas of middle-east and Africa, has now woken up to the existential threat that has been staring right in its face in the form of radical Islamism. Barely a week has passed after the Sweden riots, where Islamic fundamentalists tried torching and destroying everything that came in their way without any regard for law and order—a sort of movement has started beginning to shape up against the threat of radical Islam in the continent.

In Sweden, it all started when Rasmus Paludan, who leads the far-right Danish anti-immigration party Hard Line (Stram Kur) was denied entry into Malmo to hold a meeting about “Islamization in the Nordic countries” where it was rumored that the Quran would be burned. But authorities pre-empted Paludan’s arrival by announcing he had been banned from entering Sweden for two years and was later arrested near Malmo. His arrest sparked outrage among his followers who then went ahead with the rally and set a copy of the Quran ablaze.

After Sweden, a similar incident had happened in Norway that brought international attention to the issue. In the Scandinavian Country in Europe, ugly clashes broke out last Saturday at the anti-Islam rally. As per News Agency NTB, a female member of SIAN ripped pages from the Quran and spat on them.

In both the European countries, there was an anti-Islam movement which was started initially and led to riots by the radical Islamists. After Sweden and Norway, it is now another European country–France–which is beginning to recognise the threat of radical Islam.

Leading the charge is the French satirical newspaper Charlie Hebdo, which is set to republish controversial cartoons of the Prophet Muhammad to mark the start of a trial of suspected accomplices of terrorist gunmen who attacked its offices in January 2015.

The caricatures to be re-published this week were first printed in the fall of 2005 by the Danish newspaper Jyllands-Posten, setting off sometimes violent protests in early 2006 by Muslims who believe depicting Muhammad is blasphemy.

French President Emmanuel Macron has extended his support to the magazine’s decision and extolled the virtues of democracy and freedom of speech as he said, “It’s never the place of a president of the Republic to pass judgment on the editorial choice of a journalist or newsroom, never. Because we have freedom of the press.”

On 7 January 2015, the Kouachi brothers went on the rampage at the Charlie Hebdo Paris offices, killing nine journalists, a maintenance worker and two police officers, one of whom was shot at point-blank range on the street outside.

Two days later, a third Islamist gunman, Amédy Coulibaly, attacked the Hyper Cacher kosher supermarket in a southern district of Paris, killing four customers and taking several hostages. Coulibaly, who was in contact with the Kouachi brothers, made a video pledging allegiance to Islamic State.

Macron has already stated that Islamist separatism is incompatible with freedom and equality.“We must never accept that the laws of religion can be superior to those of the Republic,” Macron had said in February earlier this year in a powerful speech at Mulhouse.

Islam is the fastest-growing major religion in Europe, primarily due to immigration and higher fertility rates among Muslims. With the middle east and the African continent in a constant state of turmoil, immigrants from Muslim countries like Syria and Libya have started to appear in numbers in Western Europe, especially in Germany, France, and Belgium.

The concerns about Islamism go well beyond terrorism. A pattern has emerged where non-violent Islamist groups, wh­ile largely operating within the boundaries of the law, propagate an interpretation of Islam that drives a wedge between Muslims and non-Muslims, contributing to polarization and harming integration.

‘Kaafir’ as the Muslims like to call the non-Muslims are dubbed inferior in the eyes of Islam and some interpretations of Muslim preachers even argue that Kaafirs are subjected to be ruled over by the Muslim world.

The stark similarities between the modus-operandi of extremists in India and the ones in Norway or Sweden are difficult to side-step. It’s a welcome step that Europe is now at least trying to hold some conversation about the issue that had been hiding in plain sight.