EU’s U-turn against Xi Jinping is going to hurt! China tries to bully pro-Taiwan Czech Republic and falls on its face 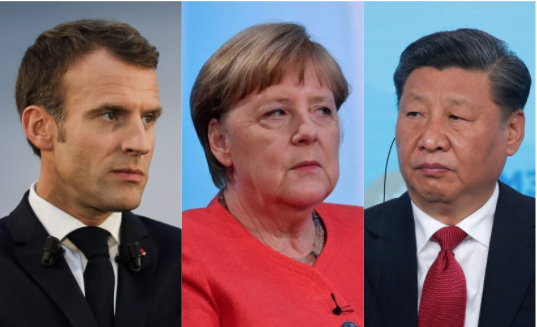 There is no doubt that the European Union has shown a soft corner towards China and has allowed the country to escape scot free in the United Nations over its role in the Wuhan coronavirus pandemic. However, it seems that China has now crossed a line as it attempted to bully Czech Republic over its insistence of engaging with Taiwan. The European Union hasn’t taken kindly to the Chinese bullying attempts and have uniformly lambasted Chinese Foreign Minister Wang Yi who ironically is on a damage control European tour.

Perhaps only the Chinese Communist Party can end up causing more damage on an apparent damage control tour. Wang Yi’s European Union tour has been decorated with a series of embarrassments with countries publicly questioning China’s aggression in the South China Sea and the deplorable human rights condition in Hong Kong and Xinjiang. The latest embarrassment comes after China attempted to bully Czech Republic over its insistence on engaging with Taiwan, which finally united the European bloc as they came together to lambast Wang Yi and China.

Czech Senate President Milos Vystrcil earlier this week embarked on a visit to Taiwan which severely earned the ire of China who considers Taiwan to be a part of its territory. Vystrcil in his speech to Taiwanese lawmakers said, “I am Taiwanese” in an apparent display of solidarity with Taiwan.

Vystrcil is heading up a 90-member delegation of Czech civic and political leaders to Taiwan – the largest-ever Czech delegation visiting the country.

The trip has constantly been condemned by China with Wang Yi during his stop in Berlin, claiming that the Vystrcil’s trip to Taiwan amounts to “crossing a red line.”

Commenting on the trip, Chinese Foreign Ministry quoted Wang Yi as he sought to warn the Czech Republic that the trip is, “an unendurable provocation for which there will be retribution.”

In the statement, Yi was quoted as saying “the Chinese government and Chinese people won’t take a laissez-faire attitude or sit idly by and will make him pay a heavy price for his short-sighted behaviour and political opportunism.”

Czech Foreign Minister Tomáš Petříček sevrely berated Yi’s threatening comments as he took to Twitter to claim, “Minister Wang’s statements are over the edge. Such strong words do not belong in the relations between the two sovereign countries.” He further urged China to pursue “factual, practical cooperation without emotions that do not belong in diplomacy.”

The fact that China claimed that Vystrcil will have to “pay a heavy price” didn’t go down well with the EU leaders. German Foreign Affairs Minister, Heiko Maas warned Wang Yi against making “threats” toward European allies.

“We as Europeans act in close cooperation — we offer our international partners respect, and we expect the exact same from them. Threats don’t fit in here,” said Maas.

This is a surprising development considering the fact that German Chancellor Angela Merkel has emerged as Beijing’s biggest ally and has led the way in protecting China over any backlash against the China made pandemic.

Another prominent voice of the bloc, France has also backed Czech Republic against Chinese threats as it stated that it stands on the side of the Czech Republic and will not accept China making threats against a EU member nation.

in addition to Slovakia, France now says that it stands on the side of the Czech Rep and will not accept China making threats against a EU member nation https://t.co/lJCxuD35sU

President of the Slovak Republic, Zuzana Caputova took to Twitter to giver her backing to the Czech Republic. “Threats directed at one of the EU members and its representatives contradict the very essence of our partnership and as such are unacceptable.” read Caputova’s tweet.

#Slovakia stands by the Czech Republic. #EU–#China relations are based on dialogue and mutual respect. Threats directed at one of the EU members and its representatives contradict the very essence of our partnership and as such are unacceptable.

The visit by Vystrcil comes in the backdrop of China issuing stern warnings to the Czech Republic since January this year over a range of issues. According to Vystrčil, the decision of his to undertake a visit to Taiwan was driven by the fact that China was pressuring his country repeatedly, apart from issuing a warning to the lawmakers against congratulating Taiwan’s President Tsai Ing-wen on her re-election. “The People’s Republic of China believes it has a right to tell us what to do,” Vystrčil said.

Kubera, the previous Speaker of Czech Senate was due to visit Taiwan in February this year, however, he died in late January after a visit to the Chinese Embassy in Prague. Jaroslav Kubera, three days before his sudden death, had visited the Chinese Embassy for dinner, during which the Chinese ambassador requested a “private conversation” with Kubera. Kubera emerged angry and frustrated after the private meeting and asked his wife to not eat anything at the embassy.

Many people have argued that China has a role in Kubera’s death, and therefore, Vystrcil’s visit is a befitting tribute to the memory of Jaroslav Kubera, who died in mysterious circumstances before his Taiwan visit.

The mayor of a Prague district Reporyje, Pavel Novotny, wrote an explicit-laden letter to Wang Yi after the latter decided to threaten his colleague Vystrcil. In the letter, Novotny demanded an immediate apology from the Chinese minister and he accused Wang of “crossing the lines” of acceptable diplomatic norms and chastised the foreign ministry as “unmannered rude clowns!”

The best parts of this letter are untranslatable. In a tone you’d use to scold misbehaving teenagers, he berates the Chinese MFA for their “disgraceful, pathetic diplomatic fuck-up” and calls them “brazen, unscrupulous, vulgar buffoons”. 🤣🤣🤣

It seems that the historically divided European Union is also sensing the public sentiment and is turning against China.

China kept manufacturing ships to encircle the Indian Ocean, now most of its ports have been seized