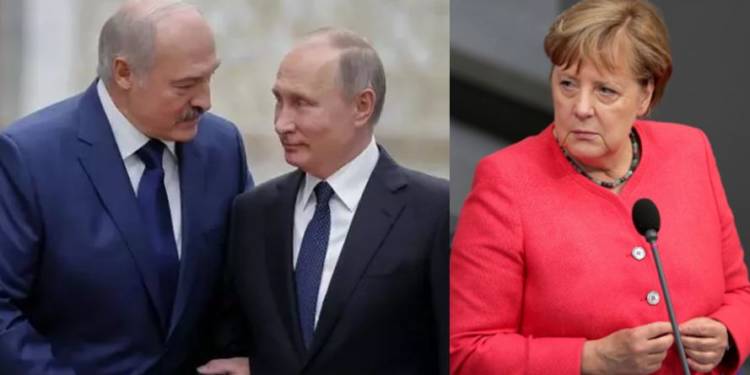 As the entire world fights it out with a Communist-Authoritarian China, the European Union and its de facto leader German Chancellor Angela Merkel seem to have different priorities. The EU is still fighting Russia for more control of the post-Soviet states located in Europe. And now, the EU-Russian battle has reached the final frontier- Belarus.

Last month, Belarus President and dictator Alexander Lukashenko declared himself– ‘elected’ for a sixth straight term and that too with a whopping 80.23 per cent vote share. It is an open secret that the Belarus Presidential polls were rigged and today Belarus is on the boil with pro-democracy protesters hitting the streets. Now, Lukashenko has chosen to bank on Putin for stifling protests, while the EU seems to be doing all it can to bring down the dictator.

The European Union, in fact, has decided to sanction officials in the Lukashenko administration. Deputy Assistant Secretary of State George Kent said, “My understanding is that the EU … is thinking of about 10 to 15 names.” Top EU diplomat Josep Borrell also said, “We need to sanction those who are responsible if the EU wants to be coherent.”

German Chancellor Angela Merkel herself has given a cold shoulder to the Belarus President. She said, “I don’t see a role for myself as a mediator at the moment since Lukashenko refused to talk to me, which I regret.” She added, “From our side, we will do everything to push for a national dialogue.” She is also pitting herself against Putin by warning that any Russian military intervention could “complicate” things.

The Brussels-based EU has rejected the August 9 Presidential elections held in Belarus and is also pushing for fresh elections in the country in a bid to topple Lukashenko. Meanwhile, the Belarus President himself grown apprehensive of the EU, and has been constantly blaming the Western world for fomenting demonstrations in his country ambition to turn Belarus into a “bridgehead against Russia.”

Putin is also ready to help Lukashenko take care of the pro-democracy protests. In an interview with the Russian State television, Putin said, “[Lukashenko] asked me to form a certain reserve of law enforcement employees, and I have done so. But we also agreed that they would not be used unless the situation gets out of control.”

Belarus’ proximity to Russia has always been a matter of concern for the European Union. The Brussels-based intergovernmental organisation has been able to keep Russia at bay in all European countries that broke out of the erstwhile USSR, except Belarus. Latvia, Estonia and Lithuania have become EU members and therefore they are considered closer to Brussels than to Moscow.

Other non-EU, post-Soviet States like Moldova and Georgia have also forged closer ties with Brussels. The Moldovan government itself desires EU accession, while Georgia too has expressed willingness to join the EU in the past. Moreover, Ukraine, another post-Soviet European nation, has gone much closer to Brussels ever since the Crimea annexation episode of 2014.

Of the seven post-Soviet European States, Belarus remains the only one that still remains pro-Russia at an official and institutional level. Belarus is the only European nation to become a part of the Eurasian Economic Union (EAEU), an economic Union of post-Soviet nations located in Central Asia, Western Asia and Eastern Europe. Belarus is also a founding member of the Commonwealth of Independent States (CIS)- an organisation of post-Soviet Republics in Eurasia.

Within Belarus, the dictator-strongman, Alexander Lukashenko–in power since 1994–relied heavily on Russian support. He used the strong KGB espionage apparatus that Belarus succeeded from the erstwhile USSR to eliminate opposition in every form. Moreover, Lukashenko also avoided privatisation through cheap oil and gas supplies from Russia, allowing him to gain full control of State-run enterprises.

Russia was able to keep Belarus within its exclusive sphere of influence all this while, even though things had started changing just before the Belarus Presidential polls last month due to rising Chinese influence in Minsk. Last year, Minsk secured a loan of 500 million US dollars from the China Development Bank, after Russia couldn’t fulfil its promise of 600 million US dollars to Minsk.

Just before the August 9 polls, Lukashenko even accused Russia of interfering in the Belarusian poll process. However, it seems that after the elections, Lukashenko has once again banked heavily on Putin in face of the ongoing protests in Belarus.

Interestingly, the European Union wasn’t sanctioning Lukashenko’s administration before the August 9 polls, when the Belarusian dictator was getting closer to China. If democracy is the yardstick, then Lukashenko should have been sanctioned even before the Presidential polls, because the Belarus President was still ruling his country with an iron fist.

The EU is weaponizing democracy in Belarus to settle scores with Russia. Had it been for democracy, the EU wouldn’t have continued its strong economic and diplomatic ties with China either.

Therefore, as Belarus moves closer to Putin, the Eastern European country is fast-becoming the latest battleground between Merkel and Putin.

As US and India begin formalizing a mini trade deal, China’s place as the key link in global supply chain begins breaking