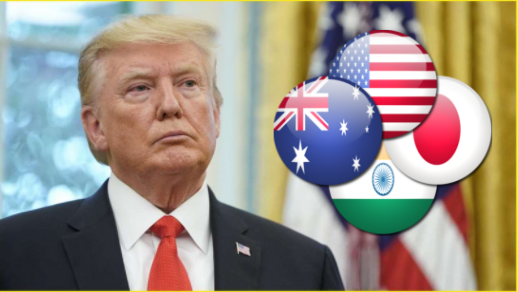 The United States wants a NATO-like formal alliance with the other QUAD member nations- India, Japan and Australia. A NATO to counter “a potential challenge from China” means an attack on any member-nation would be considered as an attack on the QUAD and joint forces would deal with China in any such situation.

The US aims “to create a critical mass around the shared values and interests of those parties in a manner that attracts more countries in the Indo-Pacific and even from around the world … ultimately to align in a more structured manner”, said Deputy Secretary of State Stephen Biegun. All four countries are expected to meet in New Delhi in winter to formalize the agreement.

The attempt by the United States to formalize the agreement with QUAD member nations shows the increasing importance of Indo-Pacific in its evolving security strategy. NATO was formed by the United States to secure an alliance with Western Europe and establish its hegemony in the Atlantic Ocean, which has the highest geostrategic importance after the Cold War as the Common enemy was the Soviet Union.

However, Russia is no longer a formidable enemy of the United States and neither is it a threat to global American hegemony. China, with the second-largest economy, state of art weapons, an authoritarian Communist regime, and an assertive foreign policy, is number one on the enemy list for the United States. And therefore, the strategic importance of the Atlantic Ocean and trans-Atlantic alliance– NATO– is of very little importance, if compared to current hotbed of global activity- Indian and the Pacific Ocean.

“The Indo-Pacific region is lacking in strong multilateral structures,” said Biegun. “They don’t have anything of the fortitude of NATO or the European Union. The strongest institutions in Asia oftentimes are not, I think, not inclusive enough and so … there is certainly an invitation there at some point to formalise a structure like this,” he said.

India and Japan have border tension with China since decades and Australia, too, joined to protect its interest in Pacific and stop the takeover of the country by Chinese deep state. On the other hand, the United States wants to curtail China’s aggressive foreign policy to protect its position as a pre-eminent superpower. All four countries are in the alliance for self-interest and to curtail the common enemy– China. Therefore, this alliance is expected to last longer and get more strategic importance in American foreign policy compared to NATO, given the fact, America already won the cold war with the Soviet Union three decades ago and the aim of NATO is more or less complete.

On the other hand, the cold war with China has just started and America will need allies in the Indo-Pacific region to win this cold war. For this reason, no ally is as valuable as India. Apart from QUAD, the countries from Southeast Asia, which face constant Chinese bullying in the South China Sea, are also expected to join in the coming years.

India and the United States started the joint naval exercise in Malabar as early as 1992 and Japan joined in 2015. Now, as per a US State Department official, India is “clearly indicating an intention to invite Australia to participate in the Malabar naval exercises, which will be a tremendous step forward in ensuring the freedom of passage and the security of the seas in the Indo-Pacific.”

The QUAD will ensure that China’s ambitions in the South China Sea remain limited. The Communist Party mouthpiece, Global Times, is already rattled by the proposal and it quoted an expert saying, “The US is gaining chips in tempting India to join its anti-China alliance, but India has its own plans as it wants to remain diplomatically and strategically independent, and is also using strained China-US ties to maximize its interests,” in an article titled- US-led NATO-like alliance not reliable for India in border talks with China: experts.

The formalisation of QUAD, like NATO, has the capability to shift the global security structure from the Atlantic Ocean to Indo-Pacific.

EU’s U-turn against Xi Jinping is going to hurt! China tries to bully pro-Taiwan Czech Republic and falls on its face