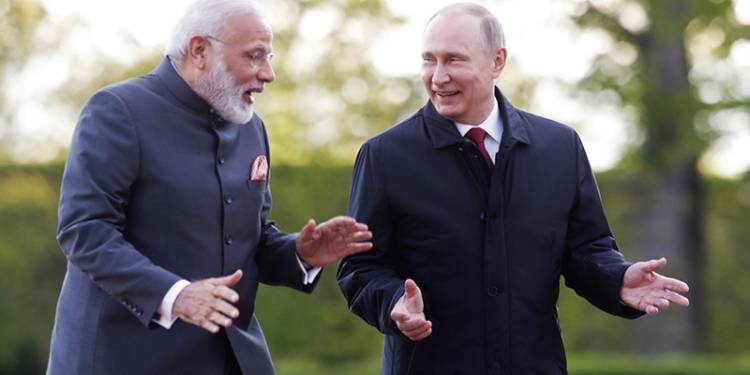 India’s all-weather ally Russia has once again shown that no trade deal, however lucrative, is bigger than the relations between the two age-old friends. On Thursday evening, after an hour-long meeting between India’s Defence Minister Rajnath Singh and Russia’s Defence Minister Gen Sergey Shoigu, it was announced that Moscow will not be supplying arms to Pakistan and New Delhi can be assured that the prospect of any deal happening with Islamabad was next to impossible.

In the past, Russia had supplied half a dozen helicopters to Pakistan, but, when India objected to it, Moscow instantly pulled the plug out of the deal.

In July, the Russian government had rejected Pakistan’s request to buy new-generation Kalashnikov rifles, commonly known as AK, assuring India that there will not be any military deal with Islamabad.

On the other hand, General Shoigu reiterated Russia’s commitment to engage actively with India on the Make in India program, including substantial participation in the forthcoming Aero India-2021. The show will be staged at the Yelahanka airbase outside Bengaluru from February 3 to 7 with all the necessary precautions to prevent the spread of the Covid-19.

Reported by TFI earlier, Russia has not only given a jolt to the terrorist state of Pakistan, but it has also announced the suspension of S-400 surface-to-air missile systems to China and said the resumption of further deliveries is yet to be ascertained.

Russia’s S-400 Triumf is arguably the world’s best air defence system and Moscow’s decision to suspend the delivery of S-400 missiles is exposing the deep cracks in Sino-Russian relations.

The Russia-built S-400 Triumf or SA-21 Growler as called by NATO — is the world’s best operational long-range surface-to-air missile. Most of the analysts believe that the system at this point of time is unrivalled on earth. It is much ahead of the Terminal High Altitude Area Defense system (THAAD), PAC 3 & NASAM 2 developed by the United States and its allies. The S-400 Triumf system can engage anything in the air within a range of 400 km and at an altitude up to 30 km.

Sino-Russian ties have already soured over many reasons. Recently, Chinese wolf-warriors even staked a claim on the Russian city of Vladivostok which prompted India to push Moscow towards a clear role in the Indo-Pacific.

Ties between Moscow and Beijing anyway remain tense over increasing competition in Central Asia and the Arctic where China wants to replace Russia. Moreover, Moscow is concerned about dangerous Chinese influence in it’s the Russian Far East.

The nefarious duo of China and Pakistan that had been chirping incessantly after India backed out of Kavkaz-2020, were given a harsh reality check after India clinched an outright diplomatic win. After refusing to participate in the military exercise in Russia where China and Pakistan were participating too, New Delhi sensing Moscow’s displeasure played a masterstroke and invited it for a naval exercise near the Strait of Malacca—China’s Achilles heel, which is scheduled to begin from today.

At least three of Russia’s warships are expected to participate in the exercise that will be conducted at the Andaman Islands. China will be infuriated with the developments as the Strait of Malacca is the chokehold point where India has been steadily applying pressure. 80 per cent of China’s oil supplies pass through the South China Sea via the Strait of Malacca, and growing Indian presence in its very close proximity can easily hamper China’s hydrocarbons supply from the Middle East; hence, bringing the Middle Kingdom to its knees.

Russia understands that there is more harm than good in associating closely with Pakistan or for that matter China. Moscow is also anguished by China’s love for stealing defence designs. Russia is one of the biggest defence suppliers to China, but the latter cannot overcome its kleptomania. Russia’s state-owned defence conglomerate, Rostec had even accused China of stealing its intellectual property earlier this year.

Owning to the aforementioned scenarios and Russia’s closeness to India, Vladimir Putin’s government refused to deal with New Delhi’s two worst nemeses. Another diplomatic victory for New Delhi in the region.