Imagine seeing US and Russia unite 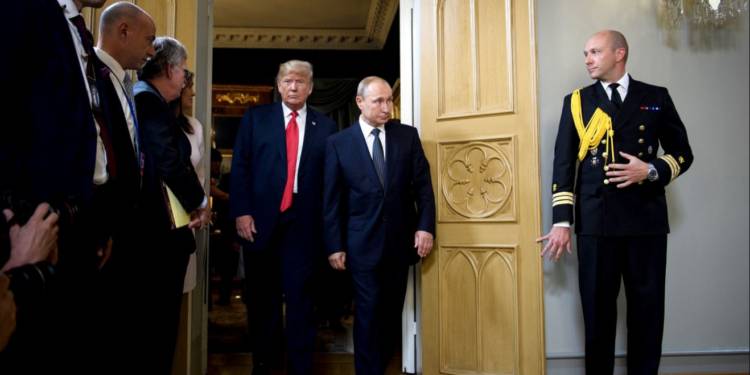 As the United States wakes up to the China challenge in the Indo-Pacific, there is a clear realisation in Washington’s top foreign policy echelons that are calling for a reset in US-Russia ties. The idea of a US-Russia rapprochement which is still regarded as ridiculous by many in the US, particularly amongst the Democrats, seems to be gaining acceptability amongst the US foreign policy heavyweights.

The letter makes certain crucial observations including the need of a new strategic posture towards Moscow- “a balanced commitment to deterrence and détente”, engaging Russia in a “serious and sustained strategic dialogue,” and more judicious and flexible use of sanctions that “can be eased quickly in exchange for Russian steps.

The letter also stresses on the realisation of how American policies “reinforce Russia’s readiness to align with the least constructive aspects of China’s U.S. policy,” insinuating that US policymakers’ hostility towards Russia has led to Russia getting further close to China.

While it offers “six broad prescriptions for US policy” to achieve the correct balance in US-Russia ties, the essence of the open letter is the realisation that “the success of U.S.-China policy will in no small measure depend on whether the state of U.S.-Russia relations permits three-way cooperation on critical issues.”

The American diplomats understand how China only becomes stronger when Washington tries to confront both Moscow and Beijing together.

Contrary to popular perception, Putin doesn’t envisage deep Sino-Russian ties. Russia’s trade ties with the European Union ($230 billion) are more than double compared to that with China ($110 billion). And the sale of Russian arms to China has also been decreasing substantially. As against the peak of $3.2 billion in 2005, Moscow has been selling arms worth $816 million to China on an annual basis between 2010 and 2018. China’s share of Russian arms sales has also declined drastically from 47.7 per cent in 2006 to 13.7 per cent in 2018.

Also, Russia supplies more oil and gas to the EU than to China. Similarly, Moscow has not benefitted, neither has it shown the intention to benefit from Xi Jinping’s flagship Belt and Road Initiative (BRI). The distances between Russia and China were made possible by allowing Russia to remain in the mainstream. Now, by pushing it into a corner and making Moscow a pariah, the US is unnecessarily pushing Russia towards China, which only makes China stronger.

The letter is a practical realisation of how the US doesn’t have to club the two Communist-Authoritarian giants together and take on them, rather it is a better option to use their faultlines and take on the bigger threat (China) with greater vigour. This was broadly the Nixon-Kissinger policy of the US-Soviet Cold War era. At that time the Nixon administration had struck a bargain with China by exploiting the China-USSR rivalry, further marginalising the erstwhile USSR.

The present world order gives the Trump administration an opportunity to pull Russia into the mainstream and corner China, which is becoming increasingly expansionist and belligerent.

The core idea of the open letter is to create a broad common ground with Russia on all contentious matters and avoid deepening of Sino-Russian ties. Of course, the American veteran diplomats do not think that the US and Russia can become the best of friends.

They admit that at most the US-Russia relations will be a “mix of competition and cooperation,” but also argue that Washington must strive to find the most “beneficial and safest balance between the two,” instead of going all out against Moscow and pushing Putin to join hands with his Chinese counterpart, Xi Jinping.

The three main issues between the US and Russia are the ideological differences, geopolitical clashes and the American sanctions regime. But in a way the US and Russia can find common ground, while fighting a common enemy in China.

The American Foreign Policy heavyweights suggest a quid-pro-quo of sorts to avoid confrontations over Russian meddling into US polls. The open letter argues that the US must “engage Russia through negotiations out of the public glare, focused on each side’s capabilities to do great damage to the other side’s critical infrastructure.”

In return, the open letter highlights the need to accept Russia as it is, instead of forcing American characteristics upon the Authoritarian nation while emphasising, “We must deal with Russia as it is, not as we wish it to be, fully utilizing our strengths but open to diplomacy.”

Also, on issues like Ukraine and Syria, lighter American sanctions instead of a steadfast attitude can induce Russia to at least start bargaining with the White House. Currently, Putin has little incentive to reconcile with the US, because he feels that even if he advances negotiations, the US will not ease sanctions on Moscow.

Moreover, common ground can be reached on common interests in reigning in countries like Turkey within the Eastern Mediterranean and Moscow’s own interests of developing the Russian Far East cities like Vladivostok as a part of the Indo-Pacific Initiative.

As such, the suggestions of a US-Russia reset are unlikely to capture the imagination of policymakers or legislators straightaway. But the fact that top echelons of the American Foreign Policy apparatus are thinking on such lines suggests that the US might just start reorienting its Russia policy to bring it in line with the present-day US-China rivalry context.