Chinese foreign minister started his Euro tour with hopes and ambitions, he came back with despair and humiliation 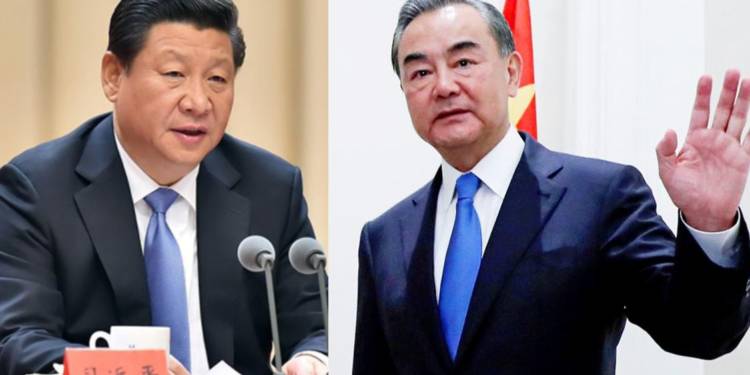 The US-China decoupling, as it is being called, is bringing about tectonic shifts in the already dynamic world order, with the European Union distancing itself equally from both the US and China, much to the latter’s dismay. Under the chairmanship of German Chancellor Angela Merkel, the European Union has been made to develop a liking, albeit unwanted in nature, with respect to China. This also fits into the larger scheme of things for EU, as it looks to distance itself from the Trump-led US, at the cost of selling itself away to Chinese colonialism.

Now, while Chinese colonialism in Europe is not quite at the face, it is nevertheless a steady strategy adopted by Beijing to extend its borders and take an imminent war with the United States to its Eastern Coast. Angela Merkel, rest assured, has done quite a spectacular job of bringing together all EU member states to accept China as a compulsive friend, if not as a natural ally.  Impressed by the German Chancellor’s groundwork, Xi Jinping deployed his foreign minister Wang Yi for a five-nation tour of Europe, which included halts in countries like Italy, the Netherlands, France, Germany and Norway. The visit ended as an unmitigated disaster for Beijing, not to mention as a personally embarrassing one for Wang Yi.

The visit, which was aimed by Xi Jinping and his aide-like foreign minister to be one which could be used as an opportunity to consolidate support from major European players ahead of the September 14-China-EU summit, ended up exposing the frailty of Sino-European ties, as the European countries made it no less than an inquisition for Wang Yi. Human Rights violations, Hong Kong, unfair trade practices, Indo-Pacific; China was pounded on all counts. The German Foreign Minister Heiko Maas even went to the extent of warning China, saying that the middle kingdom shouldn’t dare threaten the European countries.

To be fair, German Chancellor Angela Merkel held the fort for Xi Jinping for as long as she could. This gave much hope to Beijing, which hopped around in joy for quite some time of having found a formidable ally in Merkel, whipping support for China among EU member states. However, Merkel too had a threshold. When faced with a country like China, one simply cannot go on and on unquestionably supporting it. Chinese excesses in Xinjiang and its abuse of Uighurs, the imposition of National Security Law in Hong Kong and heightened Chinese belligerence in the Himalayas and South China Sea ultimately led to the EU finally snubbing China, in a grandly disrespectful manner no less. Internal dynamics and external factors, all lead to the EU allying with the democratic and free world, led by the United States. Siding with China, although attempted at first, proved to be a miscalculation on the part of EU, a mistake which they are now working to rectify.

Mike Pompeo paid a few visits here and there in Europe, which we think have gone a long way in ensuring that the EU decides to give up on its Chinese appeasement. A major focus point of Pompeo would have been the Huawei issue, and he seems to have struck a chord with many countries of the Union, like Europe, in any case, knows how China is fond of stealing intellectual property and personal data of global citizens. No wonder, the EU is now toughening its stance on entering a Free Trade Agreement with China and is increasingly growing apprehensive about the feasibility of the same. Again, it is German Chancellor Merkel who is working overtime to ensure an FTA with China sees the light of the day, even as other member states refuse to align with the middle kingdom.

Now, coming back to the disaster of a tour undertaken by Chinese Foreign Minister Wang Yi; the same provided a glimpse into what the EU has in the offing for China. For so long, while the Union has turned a blind eye to Chinese atrocities and belligerence, the sand seems to have run out now. Therefore, when Yi landed in Italy, he was shocked to find out that exiled Hong Kong pro-democracy activist Nathan Law reached Rome and called upon the Italian Foreign Ministry to raise concerns about the former British colony’s “annihilated status” owing to the draconian National Security Law. The Italian Foreign Minister Luigi Di Maio was himself critical of China’s latest moves in Hong Kong that have violated the 1984 Sino-British joint declaration.

While in the Netherlands, the Chinese Foreign Minister was summoned by a group of Dutch lawmakers as a visiting foreign representative to a meeting with the Dutch legislature’s Foreign Affairs Committee.  Wang Yi was supposed to answer some tough questions on Human rights, including the violations in Hong Kong and Xinjiang. Of course, to save himself from additional embarrassment, not to mention being thrashed by a Dutch parliamentary committee, Wang Yi rejected that summon.

As mentioned earlier, while in Germany, Wang Yi threatened the Czech Republic and the President of its Senate for visiting Taiwan. German Foreign Minister Heiko Maas, upon hearing such threats being given out by a clown-like Jinping aide, remarked that “we as Europeans act in close cooperation” and demand respect, and that “threats don’t fit in here.” The EU wouldn’t become a “plaything” in the Sino-American rivalry, he added. France, Slovakia and other European countries quickly backed Germany for standing up to Chinese threats.

The European Union is demanding the inking of an investment treaty between itself and China as a prerequisite to an FTA. Additionally, it wants China to behave itself and conduct business professionally and fairly, as per WTO norms. China is unwilling to give up on its dubious practices. This is making FTA negotiations between the two sides extremely difficult, with China commanding no leverage over the EU. What was supposed to be a visit meant to consolidate European support for China, instead, became a circus of China being alienated by the Atlantic union rather overtly.

‘We must follow India,’ India’s complete domination of China on the battlefield has emboldened China’s enemies