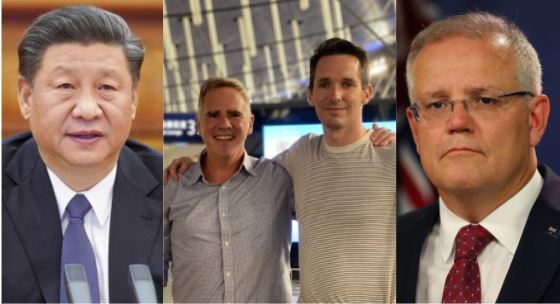 China and its distasteful hostage diplomacy is a well-known fact and despite being repeatedly called out on the world-stage for it, the red-regime more often than not uses this repugnant route to settle political scores. But, a story of some extraordinary presence of mind from the Australian authorities has come into the light which eventually thwarted Beijing’s plan to abduct two Australian reporters in an attempt to get back at Canberra over the souring bilateral relations.

Bill Birtles of Australian Broadcasting Corporation and Mike Smith of Australian Financial Review were the two journalists who had a narrow escape from the clutches of the Chinese security agencies.

It is being reported that Australian diplomats, after sensing some provocateur by Chinese agencies, advised Mr Birtles, ABC management as well as Mike Smith last week, that they should leave China immediately.

While Bill was having farewell drinks with his friends in his apartment last Wednesday, with a scheduled departure flight on Thursday, seven Chinese police officials stormed into his apartment and said that he could not leave the country and would later be questioned over a “national security case”.

Bill, sensing the danger immediately contacted Australian consular officials, who collected him and took him to the Australian embassy, where he spent the next four days.

Mike Smith, who is based in Shanghai, also received a visit by police – prompting him to go to the Australian consulate there. Both men were questioned over Ms Cheng Lei.

Ultimately, they both were allowed to leave the country in exchange for agreeing to be interviewed by police.

“I also want to note that Australia is, of course, a strong supporter of media freedom, freedom of the press, and that it is disappointing that after many years, Australia will not have a media organisation present in China for some period of time,” she added in a statement on Tuesday.

Mr Birtles, after returning to his native country showed his relief and iterated, “It’s a relief to be back in the country with genuine rule of law. But this was a whirlwind and it’s not a particularly good experience.”

She hasn’t been charged with any offence but is being kept under “residential surveillance at a designated location”. Such arbitrary detentions are an example of how unsafe China can be for foreign workers and tourists. And unlike Birtles and Mike, she didn’t have the opportunity to inform the consulate.

Australia has been at China’s throat ever since the Coronavirus pandemic began. The bilateral relations between the two nations have gone into a tailspin since it stared emerging that China had clawed its tentacles deep inside the Australian way of life. China had methodically, under the nose of previous Australian regimes, had created a power nexus.

And it is not only Australia and its reporters that the authoritarian regime of China has looked to arrest; even the Canadian Prime Minister Justin Trudeau has hit out at China on numerous occasions for arresting “random Canadians” and pursuing diplomatic goals.

Canada’s outburst against China is based on the detention of two Canadian nationals– Michael Kovrig, a former diplomat, and Michael Spavor, a businessman. They were arrested by Chinese authorities in December 2018. This is particularly detestable because it is a tit-for-tat measure against the arrest of Huawei Chief Financial Officer (CFO) MengWanzhou by Canada in December 2018, on an extradition request from the United States.

Wanzhou is the daughter of Huawei founder Ren Zhengfei. She was arrested by Canada over US allegations of violating trade sanctions on Iran. So, Beijing decided to pick up random Canadian nationals on espionage accusations.

Till June this year, no charges were framed against them. And worse still, Beijing had even withheld consular access to the two Canadian citizens, citing Coronavirus lockdown of prison.

Beijing targeting two journalists, who were going about their normal reporting duties, is both regrettable and disturbing. It once again proves that China can go to any lengths to settle its rogue leader Xi Jinping’s fragile ego. China’s “hostage diplomacy” is ultimately going to cost it heavily. International tourism forms a major part of the Chinese economy. Between 2008 and 2018 itself, it brought 127 billion US Dollars for China in foreign exchange. But, it seems that Beijing is pushing the democratic world to destroy another Chinese sector due to its primitive ways.