US is all set to go on a ruthless buying spree! 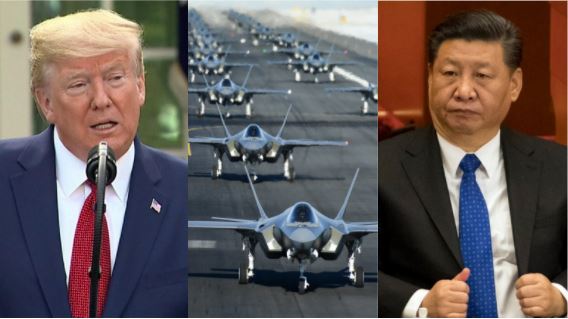 For the US military, shopping season seems to be arriving soon, as the Pentagon releases a strategic assessment report of China’s military capabilities. The report by the Pentagon, titled, “Military and Security Developments Involving the People’s Republic of China 2020” has put forward a highly pessimistic assessment of the United States’ capability to indulge in a full blown conflict with China. The report has raised eyebrows globally, as strategists around the world scratch their heads as to why the Pentagon would discount its capabilities to such an extent and cast aspersions on the prospect of their victory over a rogue China.

“China is bent on creating a world-class military that can conduct joint operations across the globe and already boasts the world’s largest navy,” the report has revealed. The Chinese Communist Party “has become increasingly confident [of] achieving its goal” of having “a world-class military by 2049,” Chad Sbragia, deputy assistant secretary of defence for China said. “The global PLA military logistics network could interfere with U.S. military operations and those of our allies and provide flexibility to support offensive operations against the United States,” he added.

The first reason could be that unlike China, the US is not willing to lose even one life in times of a conflict, since the value of human life in the US armed forces is above and beyond all other parameters which usually guide a military’s victory over its adversaries. While China is willing to spend its little emperors and commodified expendables, the same is not the same for the US. As such, any country’s growing capabilities which threaten the life of American soldiers is a threat taken seriously by the US.

Which is the reason why the armed forces of the US, particularly the Navy and especially the Air Force are making a case for unconventional defence purchases immediately. This is the reason why we said earlier that the US military is in the mood of some shopping. The primary reason why the US military wants to purchase new equipment is simple, yet crucial to them ensuring that they maintain their already gigantic edge over China, and Russia. The intellectual property theft of US’ defence infrastructure and equipment by China is the primary reason why the country’s forces are looking to buy fresh products, in a bid to update their inventory with unique equipment.

The Chinese military is a clone, and conglomeration of all of the world’s strongest militaries. The Chinese are unparalleled copycats, who harbour in them the exceptional skill of copying just about anything and claiming it is their own invention. Such is the shamelessness of the Chinese armed forces and defence manufacturers, that they have even manufactured a mirroring copy of the American F-35 fighter aircraft, after stealing American intellectual property, of course. As such, even while the US knows China is no match for it, it is wanting to take no chances, which is why their armed forces are now collectively calling for radical and new defence purchases.

TFI had earlier explained how while Pentagon’s assessment of the Chinese navy to be the largest in the world might be partially true, it does not discount the fact that the middle kingdom is in no position to win any conflict, leave alone one with the US. While China has expanded its naval fleet enormously, it has no ports to dock the same, effectively rendering the naval force toothless. China is being denied naval ports across the Indian Ocean Region, and it in any case does not enjoy goodwill across the Pacific.

No sane country, however, will sit back and break into celebration, especially when it knows that its inventory is compromised, and needs to be upgraded to insulate American defence technology from the Chinese. As such, the US armed forces are playing quite a brilliant game, by projecting themselves as those who are losing their long-held edge over China, thus paving the way for further expanding the US’ defence budget. This will also help them update their inventory, and bring in technology and equipment which China does not have the ability to make copies out of.

Ultimately, power projection is the main purpose of naval and air power. The US, as such, wants to expand the huge lead that it already enjoys over China, and for the same, the country’s already enormous air force is now proposing a “ruthless” fighter aircraft procurement regime. Similar tactics are being employed by the navy, and the only loser out of it all will be China.