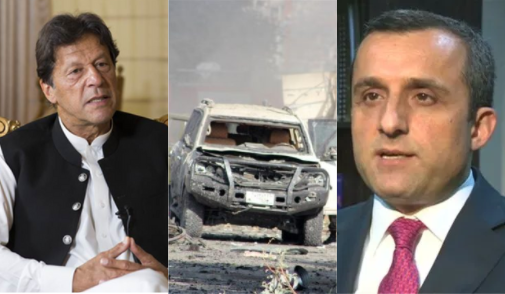 As winter is arriving for Pakistan’s already frozen economy, the rogue terror state has no clue how to handle itself and its “non-state actors” before the FATF plenary session in October, which will decide upon the backlisting of the Islamic country for its involvement in sponsoring terror across the globe, especially in India and Afghanistan. With barely a month remaining before the Financial Action Task Force’s plenary session, Pakistan is behaving much like a chicken without a head.

Pakistan is going to find it all the more difficult to evade blacklisting by the FATF on charges of money laundering and sponsoring terror against foreign nations. Even as the case for blacklisting of the terror state was already quite strong, the Islamic country has now taken some more measures to ensure that it kicks itself right into the grave that India has been digging for it over the past few years. First, Pakistan’s reported involvement in the deadly assassination attempt of the Afghan Vice President after he raised the issue of Durand line and Peshawar being a part of Afghanistan, will serve as a large nail in the military-ruled nation’s coffin. Secondly, the recognition of Syed Salahuddin as an ISI official by Pakistan, officially no less, will prove that the country harbours, sponsors and protects its “non-state actors” who perpetrate terror activities against countries like India and Afghanistan.

The assassination attempt on the Afghan Vice President Amrullah Saleh is being attributed to the Haqqani network, a terror organisation with rather extravagant links to Pakistan and its rogue intelligence agency – ISI.  Amrullah Saleh, one of the fiercest critics of cross-border terror and Islamabad’s interference in Afghanistan’s internal affairs survived the deadly assassination attempt along with his son, even as at least 10 others succumbed to their injuries.

The bomb blast targeting Amrullah Saleh came days after the Vice President raised the issue of the inauthenticity of the Durand Line, the de facto border between Pakistan and Afghanistan. Both countries have varying perception regarding the border, which is a major reason for tensions between them.

“No Afghan politician of national stature can overlook the issue of Durand Line. It will condemn him or her in life & after life. It is an issue which needs discussions & resolution. Expecting us to gift it for free is unrealistic. Peshawar used to be the winter capital of Afghanistan,” he had tweeted earlier. The involvement of the Haqqani network and ISI has come to fore in the said attack, with the military establishment of Pakistan said to have itself orchestrated the attempted assassination.

If Pakistan’s involvement in the assassination of a head of state from Afghanistan was not enough, the foolish nation has also gone on to officially recognise Hizbul Mujahideen Chief and a terror stalwart, Syed Salahuddin, as an ISI official. The document issued by Directorate of Intelligence of Pakistan government has a mention that Syed Salahuddin, chief of terrorist organisation Hizbul Mujahideen indeed works for Inter-Services Intelligence (ISI).The document mentions that Syed Salahuddin was a bonafide official of Directorate of Intelligence, and that he has been “security-cleared” and that he should not be “unnecessarily” stopped at checkpoints, WION reported.

It is perhaps a fear of the inevitable that has Pakistan’s Prime Minister Imran Khan panicking now and then. Earlier, we had reported how Imran Khan had suffered a meltdown as his opposition blocked the PTI government’s move to put up some cosmetic changes to make Pakistan appear as a financially transparent nation. The dummy Prime Minister went on to rant over how the already battered economy of Pakistan will be further pounded if India’s aims of getting his country blacklisted by the FATF succeed.

What serves as another nightmare for Pakistan is India’s decision to produce the implication money trail of the Pulwama terror attack. The money trail worth Rs 10.43 lakh of cash deposits made by Pakistan-based Jaish-e-Mohammed (JeM) masterminds into the bank account of Pulwama attacker Mohammad Umar Farooq to finance the February 14 suicide attack is all set to make India’s case stronger for getting Pakistan “blacklisted” at the FATF plenary in October.

The said developments are bound to be acting to Pakistan’s detriment at the FATF plenary next month, where the case for the country’s blacklisting will be made all the more strong. Already, Pakistan is in the “dark-grey” list of the terror financing watchdog. With Germany heading the FATF currently, and India lobbying for its blacklisting, there is no saving Pakistan this time around.