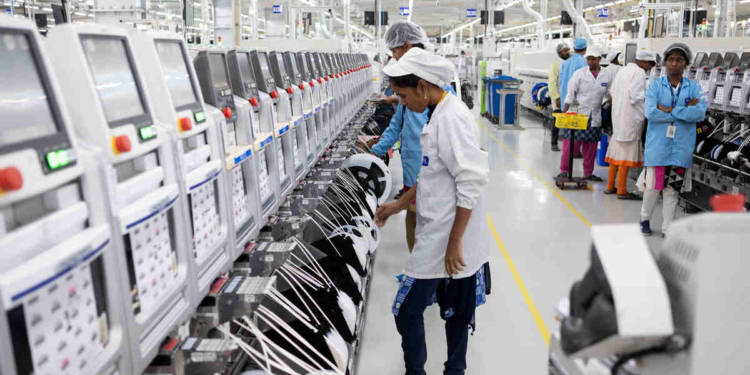 In the last economic survey, released on January 31st this year, the Economic advisors to the government of India argued for the integration of ‘Assemble in India’ with ‘Make in India’, to create large scale jobs in the country.

“China’s remarkable export performance vis-à-vis India is driven primarily by deliberate specialization at large scale labour-intensive activities, especially in ‘network products’, where production occurs across GVCs (global value chains) operated by multi-national corporations. By importing components and assembling them in China for the world, China created jobs at an unprecedented scale,” wrote the advisors in the Economic Survey.

This was a very timely suggestion as just after a few months of the release of economic survey 2020, there was the Coronavirus outbreak throughout the world. Amid the Coronavirus outbreak and Chinese misadventure in border areas, the countries around the world are coming together to diversify the global supply chain and take on China’s bullying of neighbouring countries.

Given the market size and large scale cheap labour force, India is the only country which could prove a viable alternative to replace China as an assembly destination for the companies around the world. China provided jobs to its billion-plus population and became the second-largest economy in the world by importing the essential products from technologically advanced countries like the United States, Japan, South Korea, and assembled these parts imported from different countries at home. The assembling and manufacturing of low-skilled products took place in China and the country made cost-effective products at large scale, through which it dominated the markets like India.

Now, New Delhi has a chance to replace Beijing as a global assembling destination. Through ‘Assemble in India’, the country can create 8 crore well-paid jobs and become a 5 trillion dollars economy by 2025, as per the Economic Survey. “By integrating ‘Assemble in India for the world’ into Make in India, India can raise its export market share to about 3.5% by 2025 and 6% by 2030, which is highly feasible. In the process, India would create about 4 crore well-paid jobs by 2025 and about 8 crores by 2030,” argued the authors of Economic Survey.

As the developed countries are desperate for diversification of the global supply chain, this is the golden opportunity for New Delhi to seize the opportunity and progress on the path laid in the Economic Survey to become an assembly and manufacturing destination.

The United States is already planning an ‘Economic Prosperity Network’ for diversification of the supply chain with ‘like-minded countries’ like India, Japan, South Korea, and Australia as members. The European countries are also keen to ally with India and diversify their supply chains. In its ‘Indo-Pacific strategy’, Germany counted India as ‘key-ally’ for security as well as economic cooperation in the region and argued that no modern global problem can be solved without India as a partner.

On the other hand, France, a long-time defence partner of India, held a trilateral dialogue with India and Australia on the future strategy in Indo-Pacific on Wednesday. “The outcome-oriented meeting was held with the objective of building on the strong bilateral relations that the three countries share with each other and synergising their respective strengths to ensure a peaceful, secure, prosperous and rules-based Indo-Pacific Region,” read an MEA handout.

Given the French government’s attitude towards China in the last few months, it is very much evident that France wants to assist New Delhi in containing Beijing in Indo-Pacific. “The increased salience of resilient and reliable supply chains was also discussed,” said an official.

So, it is high time for the Indian government and corporate houses to seize the opportunity and make the country manufacturing hub for the companies of Western countries to create jobs as well as have double-digit growth in the economy.