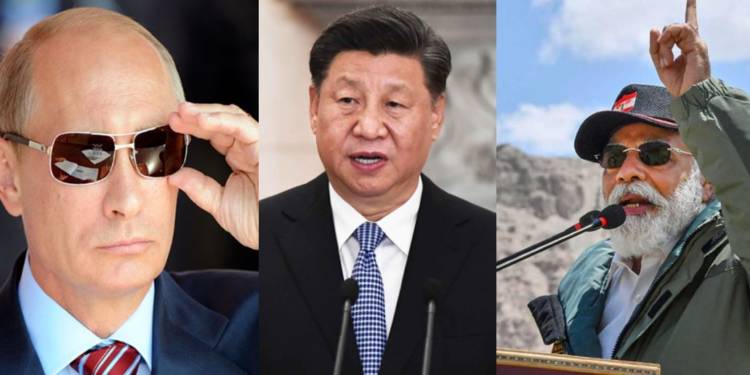 China is rattled at the prospect of an Indo-Russian military alliance, so much so that the Foreign Ministry pamphlet of the middle kingdom, Global Times, published an elaborate op-ed on how India is mistaken about the international support it has for its aggressive anti-China posturing and decisions. Profoundly asking, the headline of the hilarious piece probes, “Does international community favour India in its conflict with China?” One might have thought that the Global Times will for once behave like a responsible media organisation; however, such was not the case. In fact, the comical opinion piece, in the name of ‘analysing’ India’s international relations, talks only about Russia and the US, and how these countries will betray India once push comes to shove.

The threat-laden article, which goes on to say that China will “beat up” India if need be, is an open display of the sentimental frustration and breakdown which the Chinese are currently undergoing. Faced with global isolation paralleled perhaps only by their lapdog Pakistan, China has emerged as the angry, irritated, belligerent and frustrated country which goes about bullying other nations, only to end up being whacked themselves.

Having said that, the article published by Global Times is by far the epitome of comical writing. “If India becomes intolerably provocative, then China may as well put other disputes aside and focus on dealing with India. If India acts most proactively in confronting China, it may be beaten up. India should be wiser and stop helping the US provoke China. After all, China may not fight with the US, but with India – a cannon fodder at the forefront,” the funny article, threateningly reads.

As a matter of fact, Beijing is abundantly aware of the fact that Russia has chosen its old friend – India, over the middle kingdom. This explicit siding with India is what is tearing apart the nerves of the Chinese, who cannot fathom the fact that India has managed to garner international support to the extent that Russia completely dumps China for it.

A multiplicity of issues has led to the Russians comprehensively dumping China and leaving it to fend for itself. First, China claiming the far eastern city of Vladivostok as its own has not gone well with Russia. To add to it, Russia is well aware of the fact that China indulges in blatant intellectual property theft of their defence exports too, thus cloning Russian equipment in China and calling it their own marvellous invention. In Central Asia, China’s aggressive push to diminish the influence of Russia has also worked to it being perceived by Moscow as an adversary, keen at eating into the Russian sphere of influence, whether it is in Central Asia or even the Arctic.

The Sino-Russian “axis of convenience” as it is called, is just that. An alliance between the two countries predicated upon Russia’s convenience. As and when Russia, in the near future, is relieved of the sanctions put on it by the West, its ‘partnership’ with China will vaporise in thin air. Beijing is aware of the same, and if recent developments are anything to go by, the Indo-Russian military, defence and strategic ties are as strong as ever. Now while Global Times is publishing a misinformed opinion piece about the disillusionment of India when it comes to its international relations, it is China which is sitting as a global pariah now with all countries, including Russia, treating it as an untouchable.

Whether it is the expedited delivery of arms and ammunition to India, the halting of the delivery of S-400 Triumf missile systems to Beijing or Russia’s commitment to India of not supplying arms to Pakistan, China has many reasons to be heartbroken. The Russian media’s pro-India coverage subsequent to the border tensions between India and China also adds to the woes of the latter.

The Global Times has therefore made an absolute fool out of themselves, by claiming that the two most pro-India countries in the world i.e., the United States and Russia will not be supporting India if and when a conflict with China breaks out. The fact, however, is that we are in a conflict with China already, with Russia and the US both explicitly siding with India.