‘One last thing before I go,’ Shinzo Abe makes sure he gifts beloved friend PM Modi with a military pact 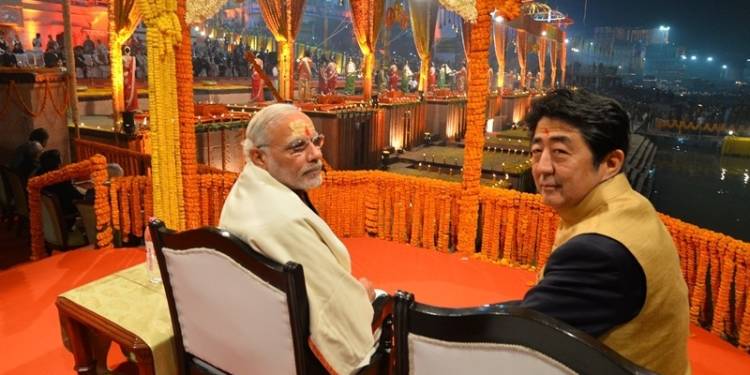 Japanese Prime Minister Shinzo Abe is all set to step down from the top political position due to recurring health issues, but the leader whilst going out has signed off on a high with ultimate grace by inking an agreement that had long been lingering around.

India and Japan, two close friends and an integral part of the Quad on Thursday finalised a landmark agreement that will allow their militaries to access each other’s bases for logistics support, amidst the growing ruckus of China in the disputed waterways of the South China Sea (SCS) and Indo-Pacific.

According to Defence Ministry, the acquisition and cross-servicing pact was signed by Defence Secretary Ajay Kumar and Japanese Ambassador Suzuki Satoshi. The agreement provides for the creation of an enabling framework for closer cooperation and interoperability, besides allowing militaries of the two countries to use each other’s bases and facilities for repair and replenishment of supplies.

Shinzo Abe-led Japan has been growing increasingly wary of the threat that China poses to it and its allies in the Indo-Pacific, and is thus trying to watch over Chinese movement. The signing of the aforementioned pact is a part of Japan’s larger goal of collective self-defence and cooperation by supplying fuel, ammunition, and other logistics to the military forces of other countries in real-time situations that pose a threat to Japan.

This will also help materialize cooperation within the Quad- an informal strategic grouping to contain Chinese influence in the Indo-Pacific. Japan cooperating with other partners completes the strategic axis against China.

Interestingly, the signing of the military pact with Japan is a watershed moment for the Quad as India has signed similar agreements with Australia and the USA in the past.

The Logistics Exchange Memorandum of Agreement (LEMOA) inked with the US in 2016 gives India refuelling facilities and access to American bases in Djibouti, Diego Garcia, Guam and Subic Bay.

India and Australia signed a Mutual Logistics Support Agreement in June this year after a virtual bilateral summit between PM Scott Morrison and PM Narendra Modi. As per the pact, the Navies of the two countries can access each other’s ports for logistics such as food, water, and petroleum.

India has signed similar agreements with France, South Korea, Singapore, and numerous other countries. The one inked with France in 2018, in turn, also extends the Indian Navy’s reach in south-western IOR due to French bases in the Reunion Islands near Madagascar and Djibouti on the Horn of Africa.

And while China tried to corner India in the international waters by using debt-trap diplomacy to take over smaller countries and its ports (Read: Hambantota port), to keep its espionage eyes on India—New Delhi through its graceful yet immaculate diplomacy has been successful in ensnaring China and thereby culling its vile neo-colonists expansionist dreams.

The parting gift Abe has given to both the countries is a testament to the fact that relations between the two old allies are at all-time high.The camaraderie between Abe and Modi is something that the detractors of the two leaders are most envious of.

During Abe’s India tour in 2015, PM Modi had taken his Japanese counterpart to Varanasi’s majestical evening Ganga aarti and the duo had spent considerable time sitting on the ghat and soaking the spirituality whilst formulating the best strategy to lead the two nations.

The about to depart PM seemed nostalgic of the bonhomie and hence posted several pictures on his official Twitter handle reminiscing the old days with his mate and even posted the selfie with PM Modi in which he had a tika on his forehead. Interestingly, Varanasi and the Japanese town of Kyoto have a sister-city arrangement.

There is no doubt that Abe’s resignation came as a shock to Japan and all of Japan’s friends including India, the US, and Australia. But what also struck everyone’s imagination was the sheer sagacity in Abe’s bid to resign when he knew he was not in the perfect health condition to continue in office. While no one was going to question him, Abe took the courageous move of hanging his boots in the better interest of his nation, despite several unfulfilled goals.

During his tenure, Abe constantly pushed Tokyo towards giving up pacifism and forging defence relations with strategic allies like India and Australia, apart from the traditional relations with the US. And as he signs off, it can be said with cent per cent ascertained that Abe has fulfilled his dream of forging a reliable team that can keep the paper-dragon in check.

‘We enjoy hot meals,’ As the winter arrives, the worst fear of China is coming true and its new propaganda shows it