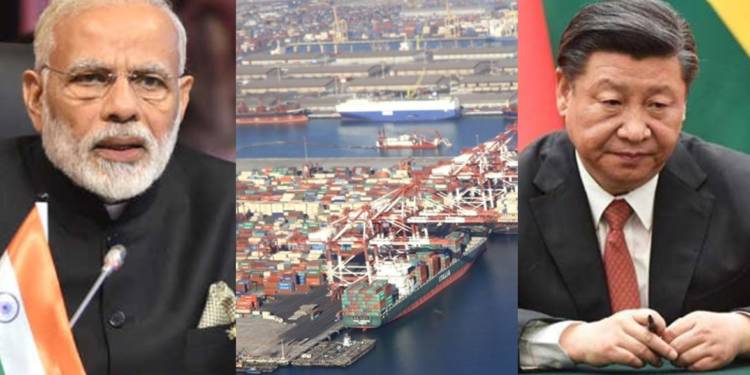 With tensions soaring between India and China over the past few months, and the Indian government taking strict action against the paper dragon on the economic front, the Chabahar port has now become a party to the Indian onslaught over Chinese firms.

In what comes as a major development bound to inflict heavy costs on China and as a consequence, on the CCP, India has decided to scrap a USD 29.8 million crane deal with Chinese firm ZPMC, meant for the Chabahar port, which is India’s greatest geostrategic investment overseas.

As reported by the BusinessLine, India has scrapped a $29.8 million contract placed three years ago with Chinese port crane maker Shanghai Zhenhua Heavy Industries Co Ltd (ZPMC) for buying four rail-mounted quay cranes (RMQCs), which were poised to be installed at the Chabahar port in Iran.

With rising tensions between the two Asian giants, India has decided to kick out the Chinese firm from any involvement in the strategic port, while also floating a fresh tender to buy four new post-Panamax RMQCs of 65 tonnes capacity each, to be delivered by the winner of the bid within 16 months of opening the LC.

The scrapping of the deal with ZPMC has come as an after-effect of the new public procurement rules framed by the Indian government on July 23 this year, which pretty much makes Chinese involvement in public procurement in Indian projects domestically or overseas impossible. The official reason given by the government behind the scrapping of the deal, however, has been mentioned as delay by the Chinese firm to construct gears required for the cranes. BusinessLine quoted a senior government official as saying, “The wordings of the order have been so carefully done, Chinese suppliers are not pin-pointed. But, definitely, Chinese suppliers will not be allowed to participate and they will not give any stuff for Chabahar port.” The official, in the context of the ongoing military tensions between the two countries, added, “ZPMC won’t like Chabahar to come up because they have built Gwadar port in Pakistan which is just 90 km away.”

The latest economic offensive against China by India in the form of barring the involvement of ZPMC is significant, as it shows how India isn’t just punishing the expansionist kingdom within its territorial boundaries, but also overseas. The move also comes in the backdrop India’s Defence and Foreign Ministers, Rajnath Singh and Dr S Jaishankar respectively holding high-level meetings with their Iranian counterparts in an interval of few days.

India has developed the Shaheed Beheshti Port at Chabahar, with India Ports Global Limited opening its office and taking over operations in the strategically crucial port in 2018. The port allows India to bypass Pakistan for conducting trade with Iran, Afghanistan, Central Asia, Europe and even Russia. Further, the port also provides for India to counter Chinese military presence at Gwadar Port in Pakistan-occupied Balochistan, which is merely 90 kilometres away from Chabahar.

China, as a matter of fact, is also working towards buying out Iran, as it looks to foil Indian attempts of gaining an upper hand in the region by operating a port that connects it to Central Asia, Afghanistan and parts of Europe. Therefore, China is set to make investments worth $400 billion in Iran over the next 25 years. As per the secret deal between Iran and China, Russian and Chinese military vessels will be allowed to use the newly created dual-use facilities at key Iranian ports including Chabahar.

While such plans of the paper dragon have failed, India has begun hitting back at China for trying to hijack its most strategic investment overseas, which poses a serious threat to the middle kingdom’s aims of making Central Asia and potentially the middle east, its exclusive sphere of influence.

‘We enjoy hot meals,’ As the winter arrives, the worst fear of China is coming true and its new propaganda shows it