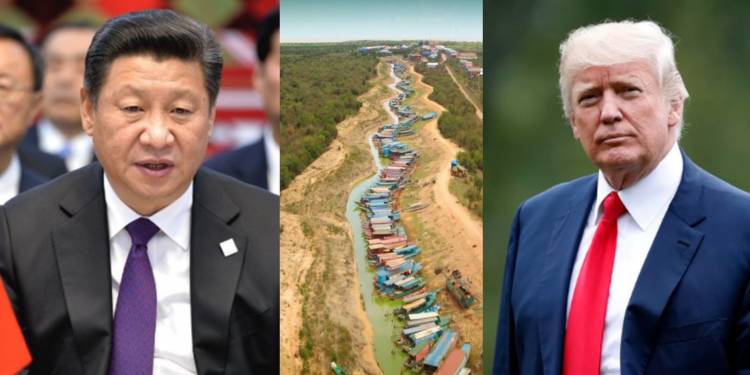 China acting as a true blue rogue state is stopping the water flow in the Mekong River, thereby leading to droughts in the downstream countries – Thailand, Vietnam, Laos, Myanmar and Cambodia. China’s sinister plan included quenching the thirst of the Mekong countries by making them fall into the infamous Chinese debt-trap. However, equations in the region are about to change as the USA has officially entered the region and is engaging with the Mekong countries as they plan to make China payback for their sins.

For the uninitiated, the Lower Mekong Basin countries – Thailand, Vietnam, Laos, Myanmar and Cambodia have recently suffered a severe drought as the water levels in the river receded to a 50-year low.

According to a US-based research company, the damaging droughts can be largely attributed to the Chinese dams that have been holding backwaters.

China claims that there was low rainfall last year on its portion of the 4,350-km (2,700-mile) river which is known as Lancang upstream. The upstream region of the River, viz. the Yunnan province of China received more than average rainfall– according to satellite measures of “surface wetness” and snowmelt– was slightly above-average during the May to October wet season. Yet the Lower Mekong Basin (LMB) countries in Southeast Asia witnessed the worst drought in the past five decades.

The water levels measured downstream along the Thai-Laos Border dropped, at times, by 3 metres (10 metres) than the average levels wreaking havoc for the agriculture-based LMB economies.

Coming into the limelight are the eleven dams that China has built on the mighty Mekong River which have a combined water capacity of more than 47 billion cubic metres, but, the Communist regime of China, known for its hallmark opacity, does not release any data about the amount of water that it is holding back to fill the reservoirs.

Unsurprisingly, China has also been funding massively in the countries as part of its BRI. Let’s take the example of Laos, a landlocked country of 7 million people, which depends heavily on the Mekong River to quench the thirst of its population. After strategically dehydrating the country and burying it under unsustainable Chinese loans, China has occupied the country’s national power grid after Laos is struggling to avoid defaulting on Chinese debt.

Laos is now on the fast track of becoming a pseudo-province of China, a recent study putting Laos’ debt to China at a whopping 45% of GDP with Chinese investment in the country is already totalling over $10 billion.

However, things are about to change, as the US has arrived on the stage and ready to spoil China’s party. Earlier this week on Friday, the US held the first Mekong-U.S. Partnership Ministerial Meeting which included Cambodia, Laos, Myanmar, Thailand and Vietnam. The meeting saw the US deputy Secretary of State Stephen Biegun, announcing a package worth $153 million for the region.

The package includes $55 million to combat transboundary crime and $1.8 million to support policymaking by sharing data on Mekong River water resources. The USA’s support is coming in the backdrop of China’s growing clout in the region as it continues to invest heavily in the region under the ambit of the Belt and Road Initiative (BRI). The US is further planning to extend its cooperation in South East Asia with the representatives of the six countries also launching a framework for expanded cooperation in regional development and prosperity.

During the meeting, Biegun said, “We have to hold China accountable as the decision made in Beijing affects you all in the region.” He further added, “China’s 11 dams in the river have “adversely affected food security, environment and livelihood of people in the Mekong. Unlike China that is dictating its will on others, the U.S. effort is to empower local people, and help countries in the region to be sovereign, independent states.”

Earlier, Vietnam, which is also affected, supported US presence in the South China Sea, despite Chinese Foreign Minister Wang Yi criticising US presence during a meeting with ASEAN leaders.

Vietnamese Foreign Minister Pham Binh Minh earlier this week said, “We welcome the US’ constructive and responsive contributions to Asean’s efforts to maintaining the peace, stability and developments in the South China Sea.” It is important to note that Vietnam currently holds ASEAN’s rotating membership.

For long, China kept the Mekong countries thirsty and at the same time had plans of entrapping them in BRI debt. But now, all of its plans are in jeopardy as the US has arrived and it is payback time for China.