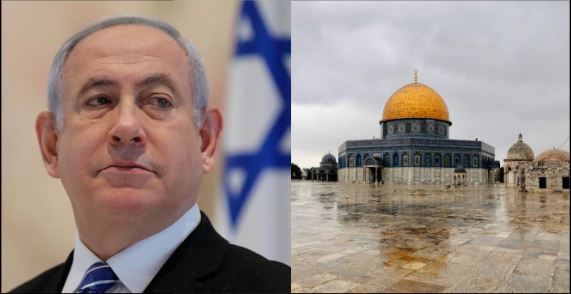 The peace deal brokered by the United States between UAE-Israel and Bahrain has one clause embedded in the joint-statement that is expected to bring a lot of heat from the Palestinians. A clause included rather cleverly in the recent accords between Israel and Gulf Arab states indicates that the Jews will now be allowed to pray in the disputed compound of the Al-Aqsa mosque.

The joint statement released between the US, Israel, and the UAE on August 13 by US President Donald Trump reads as follows: “As set forth in the Vision of Peace, all Muslims who come in peace may visit and pray at the Al-Aqsa Mosque and Jerusalem’s other holy sites should remain open for peaceful worshippers of all faiths.”

The last part of the statement ‘Jersulaem’s other holy sites should remain open for peaceful worshippers of all faiths’ has caused heartburn to the radicals as the Jews will now be able to pray inside the Noble Sanctuary of Al-Aqsa, including, the Dome of the Rock Mosque and a number of other places within the walls of the old Haram.

The Haram al-Sharif/Temple Mount is central to the Israeli-Palestinian conflict, with Palestinians fearing Israel may one day seek to assert further control over it. Presently, Jews are allowed to visit but not pray there to avoid provoking tensions.

Under the status quo affirmed in 1967, only Muslims can pray within al-Haram al-Sharif, also known as the Al-Aqsa Mosque compound, which consists of 14 hectares (35 acres).

Explained by TFI earlier, the Mosque is built atop the Temple Mount- the holiest Judaism site in the world built by King Solomon. The First Temple was destroyed in 586 BC by the Babylonians and the reconstructed temple known as the Second Temple was again destroyed by the Romans in 70 AD. Yet the site of the Temple remained as the venue of Jewish prayers.

Al-Aqsa is presently governed by an Islamic trust and thousands of Muslims regularly pray there, whereas Jews pray at the Western wall, which sits below the Al-Aqsa Mosque and is considered a remnant of the Second Temple destroyed in 70 AD.

However, with the aforementioned clause being slipped in very intentionally by the USA and having the backing of UAE, Bahrain, and Israel–the Jews will have the right to worship in the Temple mount too. To a layman, the clause can be explicitly interpreted as, “Anything on the Mount that is not the structure of the mosque is defined as ‘one of Jerusalem’s other holy sites’ and open to prayer by all – including Jews”

The right of Muslims have been confined to the Al-Aqsa Mosque only and Jews can finally pray near the foundation stone that lies to the other side of the Western Wall.

US President Donald Trump’s “Deal of the Century” brought the Emiratis and Israel on the same table and they were able to find a solution to the complex issue of the holy praying site. It’s up to the Muslims on the other side to accept this order and move on or otherwise, this issue continues to drag further.