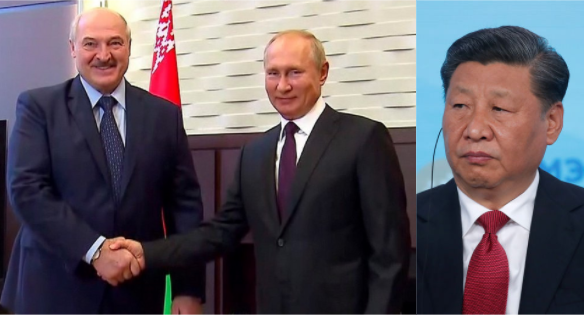 China has been humbled once again- this time by Beijing’s so-called Communist comrade, Russia. Putin has outfoxed his Chinese counterpart, Xi Jinping, in Belarus, months after a keen powerplay between China and Russia for influence in the Eastern European nation. China wanted to snatch Belarus, a former Soviet country, from Russia’s sphere of influence, and was pumping millions of Dollars into Minsk to take it away from Russia.

Initially, Belarus too was tilting towards China, but now the Belarus dictator-President Alexander Lukashenko has expressly chosen Putin over Jinping. He told Putin, “These events have shown us that we need to stay closer with our older brother”, during a visit to Sochi, Russia. Russia has therefore restrained China from eating into Moscow’s influence in Belarus.

Things have changed upside down in Belarus, following the controversial poll results that brought Lukashenko into power for a sixth straight term. Before the Belarusian polls earlier this year, Alexander Lukashenko was blaming Moscow for interference in Belarusian elections. But with the ongoing protests weighing him down, Lukashenko has turned towards the Kremlin for support.

Moscow has tactically ensured that Lukashenko has no choice left but to lean upon Russia. Consequently, China is being kicked out of Belarus.

Industrial-grade humble pie being wolfed down in Sochi today, as Lukashenko tells Putin: “These events have shown us that we need to stay closer with our older brother” pic.twitter.com/vnveklhhys

Lukashenko’s Sochi visit on Monday has scripted a historic Russian victory in Eastern Europe. The visit came amidst allegations of poll rigging and massive protests on Belarusian streets. Lukashenko has been desperately seeking Russia’s backing to quell the ongoing protests against him so much so that he is also accepting Moscow’s unparalleled role in Minsk. Therefore, the body language of Putin and Lukashenko shows that Russia has emerged not only as of the “older brother”, but also the big brother.

For China, the sudden spurt in the level of goodwill shared between Moscow and Minsk must have come as a high-voltage diplomatic shock. Beijing has been trying to win over Lukashenko and kick Russia out of Belarus. It all started last year when Minsk secured a loan of 500 million US dollars from the China Development Bank. Minsk had then come up with a rather unfriendly message for Russia, which had earlier reneged on the promise of a 600 million US dollars loan to Belarus.

In fact, armed with Chinese debt, the Lukashenko administration had started giving a cold shoulder to Russia. The Belarusian Finance Minister Maksim Yermalovich had bluntly said, “We do not consider the loan of the government of the Russian Federation as a source of funding and are not negotiating on this loan.” He added, “We have not provided any requests to the Russian side. We do not expect to receive the Russian loan.”

Things went further south when 33 alleged Russian mercenaries were detained in Minsk on July 29- days before the Belarusian elections. Local authorities accused them of being associated with Wagner, a private military company controlled by the Kremlin. Minsk alleged that the mercenaries of Russia were deployed to destabilise the Eastern European country ahead of elections.

And even Lukashenko had himself started criticising Russia, over accusations of interference in the Belarusian elections. At this time many had thought that China was able to overpower Russia in Belarus, but things changed in a few months.

Lukashenko unsurprisingly decided that the people of Belarus had elected him for a sixth straight term as their President. The people of Belarus, however, didn’t seem to agree and have since hit the streets, disapproving the Presidential poll results. Suddenly, the last dictator left in the entire European Continent realised that he is hogging the limelight for all the wrong reasons. The European Union who had given Lukashenko a free pass till now is after him and the Belarusian President needed someone to help him.

Where could Lukashenko find help? The West is, of course, antagonising Lukashenko. Beijing doesn’t have the ability to physically quell anti-Lukashenko protests, and therefore the only option left with Lukashenko is the Kremlin. Therefore, notwithstanding all that had been said between Russia and Belarus for the past one year, Lukashenko bowed down before Putin.

On Sunday, protests in the streets of Minsk escalated to a whole new level with 1,00,000 protesters taking part in the ‘anti-Lukashenko’ demonstrations and taunting the Belarusian dictator by chanting “You’re a rat”. And therefore, a desperate Lukashenko visited Russia and sought Putin’s backing for rescuing him out of the uncomfortable position that the Belarusian dictator finds himself in.

Putin himself seems to have been waiting for this opportunity, and once it came his way, the Russian President grabbed it with both hands. In the face of the angry protests across Belarus, Russia is helping Lukashenko endure the turbulent phase, which he is presently going through.

In an interview with the Russian State television, Putin said, “[Lukashenko] asked me to form a certain reserve of law enforcement employees, and I have done so. But we also agreed that they would not be used unless the situation gets out of control.” Russia is also offering financial help to Minsk with an offer of restructuring Russian loans to Belarus and also supporting the former Soviet country’s banking system.

As Belarus depends on Russia, Putting is reclaiming what Xi Jinping was trying to snatch from him. Now, Putin will not give even an outside chance to Beijing in Belarus and the Russian President might just try to push through closer integration between Russia and Belarus with measures like a common currency. By reclaiming Belarus from China, Moscow has thus sent a strong message to Beijing that Russia’s exclusive sphere of influence namely Eastern Europe and Central Asia isn’t up for grabs and China should, therefore, stop taking the liberty of eating into Russia’s privileged sphere of influence.