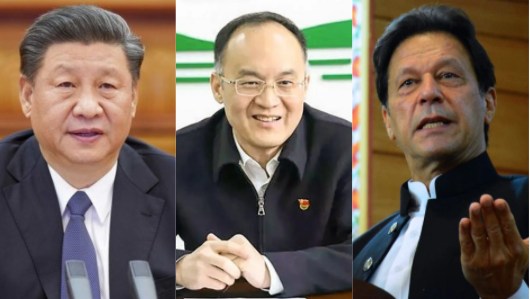 The China Pakistan Economic Corridor that was supposed to be a shining jewel in Beijing’s highly ambitious Belt and roads Initiative has hit a roadblock lately in terms of funding and the delay in construction due to the COVID-19 pandemic. With some apprehensions in the Pakistani camp, China has played its last card by sending a United Front official to woo the Imran Khan government and ensure that the CPEC project continues to remain on track.

China has named Nong Rong as the new envoy to Pakistan to win influence over the region and continue the treacherous project that is all expected to turn Pakistan into China’s colony by the turn of this decade. Rong has close links to the United Front Works Department (UFWD) and, therefore, he is well-equipped with psychological operations to influence the naysayers of the project who have started questioning the feasibility of the project.

Reported by TFI, China uses the “United Front” and United Front officers like Nong Rong to co-opt and neutralize sources of potential opposition to the policies and authority of the Chinese Communist Party (CCP) inside the country as well as outside.

Simply put, the United Front is a coalition of groups and individuals working towards the CCP’s common goals against its enemies to pin them down. These operations are mostly covert and deceptive and they spread beyond China’s borders.

Lately, Pakistani authorities have been apprehensive about the delays and disruption in the project which is pushing the country into a sinkhole of Chinese debt-trap. In a detailed report tabled before high-powered National Coordination Committee (NCC) in April this year, it was stated that the Chinese companies working on CPEC projects will suffer delays and higher costs along with supply-chain and worker related disruptions.

Even when Pakistan and China had held a joint review meeting last year, the Pakistan government had timidly registered its trepidations about the projects under CPEC hitting the deadline. At that time, China had cleverly mollycoddled the Imran Khan government and told them that it was committed to the multibillion-dollar project.

Reported by TFI earlier, Chinese banks are looking to curtail investment in the CPEC owing to the instability in the region. The Balochi Liberation Army is strongly opposed to Chinese investment and projects especially in Balochistan and has carried out various attacks on CPEC projects and in 2018, have also tried to storm the Chinese consulate. They have often resorted to violence to push China back from CPEC and Balochistan.

However, the Xi Jinping regime cannot let Pakistan drift from its grasp and, therefore, is dilly dallying the project.

Ever since the project was announced, CPEC has continued to hog the limelight, albeit for all the wrong reasons.  Although China claims the project will bring economic prosperity in the region and of course to Pakistan but the reality is far from it. CPEC is Beijing’s way of intruding into India’s vicinity to keep pressure applied over its foe.

“OBOR is a very naive concept and it is even more naive in the way it is going about in its execution. The logic put forward by the Chinese government which is that CPEC is for pure economic benefits is very basic and it is not something that is easily accepted by the world because you could see through it that it is not on economic rationale but more of geopolitical rationale that is driving this initiative,” said Shaurya Doval, a noted Public Policy Thinker.

When Imran Khan was the opposition leader, he had vociferously opposed the construction of CPEC, however, after becoming the Prime Minister, Khan had requested for the expedition of the CEPC projects. Such is the Chinese influence in Pakistan that the former had loaned $4 billion in the fiscal year ending in 2018.

Pakistan was particularly excited because CPEC not only presented perhaps the last shot at saving the country’s sinking economy but also corner India in the region as it passed through Pakistan occupied Kashmir and Balochistan.

But in the last two years, CPEC in Pakistan has moved along at snail’s pace and despite being China’s sidekick, the Imran Khan government has shown signs of agitation. Beijing has sensed the uneasiness and has consequently a United Front worker to rein in the Pakistani army and ISI back in its camp.