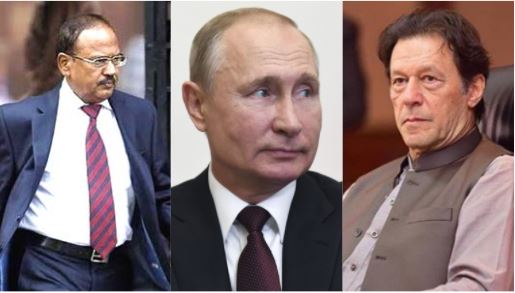 On Tuesday, Pakistan, in blatant disregard for the norms and guidelines of the Shanghai Cooperation Organisation (SCO) Summit, displayed a fictitious map showing sovereign Indian territories of Kashmir and Junagadh as part of Pakistan. This shameless and cheap display by Pakistan was seen at the meeting of the National Security Advisors of the SCO member states. India’s NSA, Ajit Doval staged a walk-out of the said high-level meeting in protest, following Pakistan’s infantile and undiplomatic display of a false map.

Meanwhile, for its childish display of an imaginative map which India has taken grave offence to and called ‘fictitious’, Russia has strictly pulled up Pakistan for its futile stunt, which has only garnered the terror-state tremendous criticism. It is believed that Pakistan had the covert support of China, which is why it went forward with the gimmick in a high-level meeting of no less than the NSAs of SCO member countries. The imaginative ‘new’ map of Pakistan was released on August 5th this year, on the first anniversary of India abrogating Article 370 and integrating Kashmir with India.

‘Pakistan’s use of ‘fictitious map’ as a backdrop for its representative depicting sovereign Indian territories as part of Pak is blatant violation of #SCO Charter & against all its established norms of safeguarding sovereignty & territorial integrity of Member states’: Sources

Nikolai Patrushev, Russian NSA, has conveyed that he was personally very grateful to NSA Ajit Doval for attending the SCO Summit. “Russia does not support what Pakistan has done and hopes that Pakistan’s provocative act will not affect India’s participation in SCO and definitely not cast any shadow on Patrushev’s warm personal relationship for NSA for whom he has the highest regard. Patrushev hopes to see NSA at forthcoming events,” sources quoted the Russian side as saying.

Russia hopes that Pakistan’s provocative act will not affect India’s participation in SCO and definitely not cast any shadow on Patrushev’s warm personal relationship for NSA Ajit Doval for whom he has the highest regard. Patrushev hopes to see NSA Doval in forthcoming meetings.

The Economic Times reported that Moscow was upset with Pakistan’s efforts to dilute the spirit of SCO summit and Eurasian architecture. As for India, MEA spokesman, Anurag Srivastava said, “This was in blatant disregard to the advisory by the host against it and in violation of the norms of the meeting. After consultation with the host, the Indian side left the meeting in protest at that juncture. As was to be expected, Pakistan then went on to present a misleading view of this meeting.”

Pakistan has made a fool out of itself, by hijacking the overall positive atmosphere in which the NSA talks would have been held. As such, it is but natural for Russia, as the host, to get infuriated with a nation which is globally recognised as a sponsor and breeding ground of Islamic terror.

Earlier this month, prior to Pakistan pulling the map-stunt in a meeting hosted by Russia, Moscow had reiterated its commitment to India, and had also assured the Indian Defence Minister that it will not be selling any arms and weapon systems to Pakistan. In July, the Russian government had rejected Pakistan’s request to buy new-generation Kalashnikov rifles, commonly known as AK, assuring India that there will not be any military deal with Islamabad.

Meanwhile, Pakistan’s best friend – China too has been stripped off the S-400 Trimph missile systems by Russia, which has indefinitely stalled the delivery of remaining units to the middle kingdom for its heightened belligerence in the Himalayas, and also for staking claim on the Russian far east city of Vladivostok. Moreover, China attempting to eat into what Russia considers its exclusive sphere of influence has also not gone down well with Moscow.

After India had decided not to attend the military exercise Kavkaz-2020 in Russia where China and Pakistan were participating too, New Delhi, much to the dismay of China, almost instantly invited Russia for a naval exercise near the Strait of Malacca.

Sensing that Indo-Russian ties are stronger than ever, Pakistan and China have begun occupying themselves by undertaking futile attempts of enraging India. What they did not realise, however, was that they would end up infuriating Russia more than it already is.