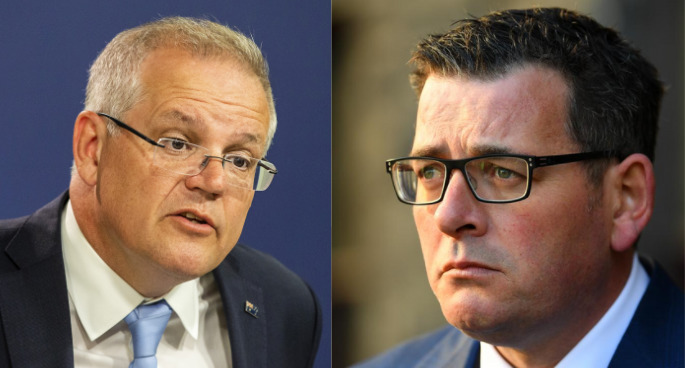 Australian Prime Minister Scott Morrison is on a mission to weed out the Chinese influence from the down under country. In the last 6 months, he alongwith his cabinet has been strengthening the legislative laws to fix the loopholes that allowed the Chinese to dominate the Australian society. But the biggest roadblock on his plans to decimate the red-regime influence has been the state of Victoria which is led by Victorian Labor Premier Daniel Andrews. The Labor MP has gifted Victoria in a silver platter to China for its ambitious Belts and Roads Initiative.

However, it seems like the tide is now changing. According to a report in The Australian, Mr Andrews has been called for an inquiry by the Federal Committee to explain why he shook hands with his Chinese counterparts in such haste when the rest of the country is running away from the clutches of Beijing.

The committee chair, Liberal Senator Eric Abetz, said it was hoped that Mr Andrews — who recently reiterated his support for Victoria’s participation in the BRI — would agree to appear before the Senate’s inquiry into the bill.

“Given that the Premier has doubled down on his support for the BRI, it would be of interest to the committee if he were to front the committee and argue his case,” Senator Abetz said.

“It is vital that when it comes to Australia’s dealings with the rest of the world, we speak with one voice and work to one plan,” Mr Morrison said whilst taking an indirect potshot at Victorian Premier.

The committee is calling Andrews for the hearing because the Scott Morrison government has announced that it is bringing a game-changing Foreign Relations Bill, which would give Australia’s Federal government the power to review, prevent or terminate all agreements signed by the State and Territory governments, Local Councils and even Public Universities with foreign governments.

This legislative move is targeted directly at the Australian state of Victoria’s $107 billion BRI project Memorandum of Understanding (MoU) with China signed last year. But the effect of the legislation will go far beyond Victoria. Morrison is trying to weed out Chinese influence throughout his country from State/Territory governments to Universities and even Local bodies.

Reported by TFI, China has increasingly bought off Australian leaders under its larger ‘debt-trap’ diplomacy plan. In June, Australian intelligence officers and police had raided the home and office of Labor MP Shaoquett Moselmane. The New South Wales legislator had long been under the scanner from the opposition and his party for having alleged ties to the ruling Chinese Communist Party (CCP).

John Zhang, a part-time staffer of Moselmane, is a prime suspect in the investigation into foreign influence plot.

Moselmane himself has been singing praises for Chinese President Xi Jinping which had first raised the alarm bells. He had publicly praised Xi Jinping’s “unswerving” leadership during the coronavirus pandemic, contrasting it favourably with Australia’s response.

“For the Peoples Republic of China, President Xi stepped up and provided that leadership. He mustered the resources of the nation and together with the great people of China – fought it and contained it,” Moselmane had written for one of his personal websites.

Reported extensively by TFI, the communist state of China had made deep inroads into the Australian way of life. From hoarding medical equipment to controlling the water bodies to owning the electrical grid of the country, China has done everything possible in the book to gain an edge over the Australian government in its own country.

Australia’s fightback against China started in the aftermath of COVID-19 when Scott Morisson started calling out for an international inquiry against Beijing and its alleged role in the spread of Coronavirus.

The Xi Jinping regime tried its best to quash the rebellion of Australia but the Aussie grit as we Indians have repeatedly seen on the cricket field came into play. Instead of mollycoddling China, the Australian government stood its ground, and ultimately countries around the world also steadily started supporting Australia.

Scott Morrison’s government has become an integral part of the new world order that is shaping up in the aftermath of COVID-19 and it is braving itself to assume further importance in the region. The scrapping of BRI from the state of Victoria will be a welcome step and it will elevate Morrisson’s position as a leader who can go to any length to clip the wings of paper-dragon.