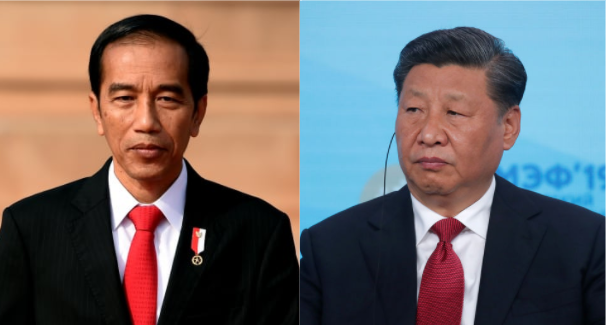 China has found a new enemy in the South China Sea in the form of Indonesia. For the past several years, Jakarta was trying to avoid becoming a part of the South China Sea disputes. But now it seems that the Indonesian President Joko Widodo has had enough of Chinese belligerence, therefore, Indonesia is now reaffirming its naval might and beating back all Chinese transgressions in face of an increasingly revisionist China.

In fact, maritime tensions between Indonesia and China are soaring over the latest Chinese incursion. As per the latest reports, a Chinese Coastguard ship intruded into Indonesia’s Exclusive Economic Zone (EEZ) near the Natuna Islands. According to SCMP, Chinese vessel remained in Indonesia’s EEZ for two days before being driven off by an Indonesian patrol boat on Monday following a bitter radio argument.

Indonesia’s maritime security agency Bakamla Wisnu Pramandita said, “[The Chinese coastguard] said they were patrolling in Chinese jurisdiction. We firmly rejected this and said this is our economic exclusive zone.” The latest incident has been described by the SCMP as “the latest in a string of incursions into the country’s EEZ by Chinese coastguard ships and fishing vessels.”

Natuna Islands are becoming a major flashpoint between Indonesia and China. Jakarta is finally pushing back against Chinese aggression, even though Indonesia didn’t want to consider itself a part of the South China Sea disputes until now. But Chinese expansionism has dragged Indonesia into this dispute. China doesn’t dispute Indonesia’s sovereignty over the Natuna Islands, but, it claims ‘historic maritime rights’ in areas overlapping with this part of Indonesia’s EEZ.

China’s illegal nine-dash claim that encircles almost the entire South China Sea for exercising maritime rights on “historical grounds” doesn’t spare the Natuna Islands either. Only towards the fag end of last year, China had dispatched a Coastguard vessel and fishing boats to the Northern Natuna Sea, compelling Jakarta to take countermeasures by sending its own fighter jets and mobilising fishermen.

Ian Storey, a senior fellow at the ISEAS-Yusof Ishak Institute said, “As China in recent years has moved to assert its jurisdictional claims within the nine-dash line, the presence of Chinese coastguard vessels and Chinese fishing boats in waters off the Natuna Islands has increased. It’s thus become more normal for China, though very unwelcome for Indonesia.”

Indonesia however isn’t letting China bully it with Beijing’s irredentist claims inside Jakarta’s EEZ around the Natuna Islands. Indonesia is putting it on the record that there are no overlapping maritime claims between China and Indonesia. After the latest Chinese incursion into the waters off Natuna Islands, the Indonesian Foreign Ministry also sought an explanation from the Chinese Embassy.

Indonesia is hardening its military power to take on China. According to Bangkok Post, a senior security official said that Jakarta will increase maritime security operations near its Islands in the South China Sea.

At a diplomatic level also, Indonesia remains defiant in face of Chinese transgressions. Jakarta continues to maintain that it is not a party to the South China Sea dispute. Indonesia keeps giving a cold shoulder to China, while the latter comes up with proposals for bilateral talks over the Natuna Islands.

Instead of giving in to the bait of bilateral talks with China, the Indonesian government has chosen to weaponise China’s dubious nine-dash claim line to put more pressure on Beijing. Even in its diplomatic notes to the United Nations, Jakarta has called for the application of the rule of international law in the South China Sea.

Therefore, Indonesia hasn’t allowed China to make the so-called “overlapping claims” in the EEZ around the Natuna Islands an international issue. At the same time, Jakarta has attacked the very basis of China’s expansive claims in the South China Sea.

Indonesia isn’t a party to the South China Sea disputes and Beijing doesn’t even have the locus standi to discuss the fictitious ‘overlapping claims’ in the waters off the Natuna Islands. Indonesia is growing increasingly assertive about its firm position against China. This is the making of a new Chinese enemy, as Indonesia prepares for a naval war against China.