In Thailand, the youth are pushing against a pro-China government with all their might to preserve democracy 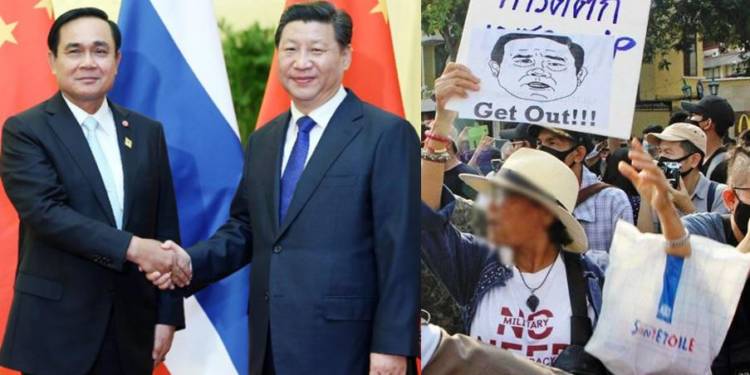 China is facing an unprecedented conundrum. Not only are governments in the Indo-Pacific region becoming patently anti-China, but even pro-China regimes are facing intense domestic pressure to mend their ways and draw a safe distance from Beijing. Take the case of Thailand for instance where the monarchical government is largely favourable towards China, but the public opinion is forcing it to get out of the Chinese hangover.

Thailand has been witnessing vocal protests that largely militate against the anti-democratic regime. At the same time, Thai protesters, who are a part of the ‘Milk Tea Alliance’, understand how their government has kneeled before Beijing on key issues like China’s gigantic Mekong dams which is creating a water catastrophe for the Lower Mekong Basin countries. This is giving rise to strong anti-China sentiment in Thailand amidst the ongoing protests.

The growing public resentment in Thailand is largely guided by two demands. Firstly, they want a political overhaul in the country’s feeble Parliamentary system. Thai youngsters are at loggerheads with the Army-backed government led by Prime Minister Prayuth Chan-o-cha. Therefore, they want to oust the incumbent regime and also force amendments in Thailand’s military-written Constitution which pro-democracy protesters claim to have guaranteed a poll victory for Prayuth last year.

The protesters are also demanding reform in the Thai Monarchy. Thailand is a Constitutional Monarchy, yet conservatives hold it sacrosanct, and insulting the King can land the critics in prison for 15 years. Yet, Thai protesters are defying all odds to demand reforms in the Royal structure.

Amidst Thailand’s internal issues, China stands to lose as the pro-democracy protesters have found common cause on social media with pro-democracy Hong Kongers and Taiwanese independence supporters.

Also, the inception of the Milk Tea Alliance- an online democratic solidarity movement run by internet users from Thailand, Taiwan and Hong Kong, has given the Thai protesters a new goal- containing Chinese influence in Thailand. It all happened in April this year when Thai and Chinese netizens clashed with each other.

What started as an insignificant war of words dismissed as “online noise” by the Chinese Embassy in Bangkok soon escalated into a common front of online users from Thailand, Hong Kong and Taiwan. Taiwan and Hong Kong users have joined hands with Thai users to troll Chinese nationalist internet users. In fact, China’s troll war is now backfiring often becoming the subject of sarcastic memes that gain instant popularity within the Milk Tea Alliance. This has now started grabbing headlines, much to the chagrin of the Chinese government.

The Thai-Taiwan/ Hong Kong camaraderie is now getting somewhat solidified. SCMP quoted a 34-year-old Thai PhD student at the National Taiwan University as saying, “Taiwanese people are our true allies when it comes to fighting for democracy.”

The ‘Milk Tea Alliance’ is therefore making Thai protests not only pro-democracy but also anti-China. Protesters are compelling the Thai government over some of the most contentious issues like the Kra Canal project and a submarines purchase deal.

Recently, when the Thai military was looking to seal a submarines deal worth 724 million US Dollars, public outrage took grip of Thailand. And soon, #PeopleSayNoToSubs started trending on Twitter. Clearly, the public pressure from Thai internet users pushed the Thailand government to drop the Chinese submarine deal.

In a much more disastrous move, Thailand was also coerced into giving up the Kra Canal project. China wanted to build this Canal in order to cut through the isthmus of Kra in Thailand, effectively bypassing the Strait of Malacca. However, Thailand was forced to scrap the 120-kilometre Canal project owing to internal pressure.

Even on the issue of China’s water wars in the Mekong river that is drying up the lifeline of many Southeast Asian countries like Thailand, Cambodia, Laos and Vietnam, Thai internet users are protesting against China. In April, #StopMekongDam started trending on Twitter in Thailand. Niwat Roykaew, an environmental activist in northern Thailand said, “We cannot just sit around and wait for China to say when they are releasing the water from their dams; Mekong countries need to have a say on this too.”

Thai youngsters are therefore finding a way to spell out the rising anti-China sentiment within their country, even though the Thai government remains pro-China. The popular opinion against Beijing has started to show effect, with the Dragon losing out on millions of dollars and a key infrastructure projects. The Thailand episode must send warning bells ringing for China. It shows that Beijing’s problem is not just the antagonised governments across the world, but also the hostile public opinion even where the local governments aren’t as badly opposed to China.

ASEAN pulls a fast one over China, puts the code-of-conduct in South China Sea in an infinite loop