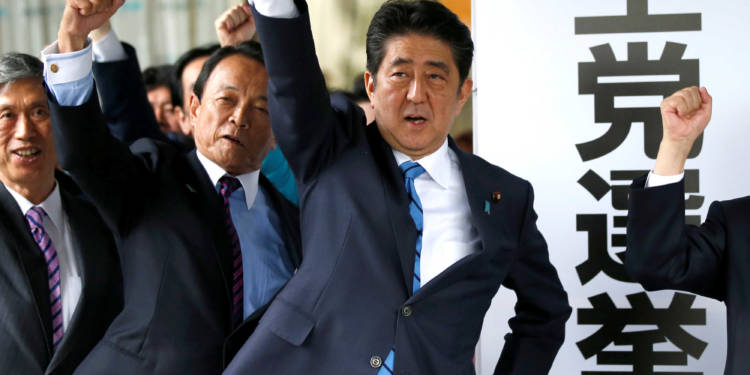 Shinzo Abe might have stepped out of office due to nagging health issues but the former Japanese Prime Minister continues to exercise influence upon the country which he led strongly since his second stint as the Prime Minister from 2013. Without any governmental obligations, a retired Shinzo Abe is infusing nationalism into his countrymen by doing what he couldn’t do freely when restrained by the shackles of international-diplomacy.

Abe went and paid his respects at the controversial Yasukuni Shrine that is viewed by China and both Koreas as a symbol of wartime aggression. Yasukuni honours 2.5 million war dead, mostly Japanese, who perished in the country’s wars since the late 19th century. But it also honours senior military and political figures convicted of war crimes by an international tribunal after the war.

Shinzo Abe’s party is now in revenge mode, and China will become the first casualty

The former premier Abe had refrained from paying tributes at the shrine in person since his 2013 visit despite other conservative politicians doing so, in particular on August 15 to mark Japan’s surrender in World War II.

However, waiting only three days after his departure from the office, Abe wasted no time in taking a sly dig at his neighbors. He even tweeted photos of his visit that is expected to not go down well with China.

“Today, I paid my respects at the Yasukuni Shrine and reported to the spirits of the war dead my resignation as prime minister,” the nationalist politician tweeted.

Like Shinzo Abe, whenever a Prime Minister of Japan has visited this monument, China has come out criticizing the move vehemently. The practice of visiting the shrine to make a political statement began in 1985 when on August 15, the then Japanese Prime Minister Yasuhiro Nakasone visited Yasukuni Shrine.

The People Republic of China had then severely criticized his move and called out Japan on several international platforms. Subsequently, it was Prime Minister Junichiro Koizumi who announced during his election campaign that he would visit the Yasukuni Shrine on an annual basis despite unfavorable response coming from its neighbor.

Koizumi’s move to visit the shrine ignite a flame of patriotism amongst the Japanese and he was voted to power with an overwhelming majority. Thereby enshrining the political importance of the visit to the shrine by Japanese leaders.

Abe making life difficult for China even after leaving the office

There is no doubt that Abe’s resignation came as a shock to Japan and all of Japan’s friends including India, the US, and Australia. But what also struck everyone’s imagination was the sheer sagacity with which Abe bid adieu to his office.

While no one was going to question him, Abe took the courageous move of hanging his boots in the better interest of his nation, despite several unfulfilled goals.

China must have been relieved thinking with Abe gone, the Sino-Japanese relations will get back on track or at least to the place where it wasn’t truncated so much. However, a shrewd Abe whilst going made sure that to put a leader in the parliament who will all but emulate his stance on the China issue.

The newly-elected PM Yoshihide Suga is being described as Shinzo Abe’s right-hand man, and therefore, he is likely to implement Abe’s vision of decoupling from China and also tackling the serious security threat posed by Beijing vigorously.

Whilst going out, Abe bowed with utmost humility and gave its long-standing ally, India a parting gift–the historic Mutual Logistics Support Agreement (MLSA) which will allow Indian and Japanese militaries to access each other’s bases for logistics support, in face of growing Chinese belligerence in the East China Sea (Senkaku Islands) and the Himalayas (Eastern Ladakh) against Japan and India respectively.

Three days after formally ejecting the office, Abe has conveyed a loud and bold message to China and the rest of the world that he might have resigned from the political corridors but in the public memory, he will continue to be the nationalistic leader who brought the country from oblivion into the mainstream. Abe, while not being in power is set to pose a much greater risk to China, and Xi Jinping, once again, hasn’t been able to catch a break.

After Belarus, Putin gives another shocker to Xi Jinping. This time in Montenegro

China had its eyes on Russia’s Far East, now India and Japan have teamed up to kick China out