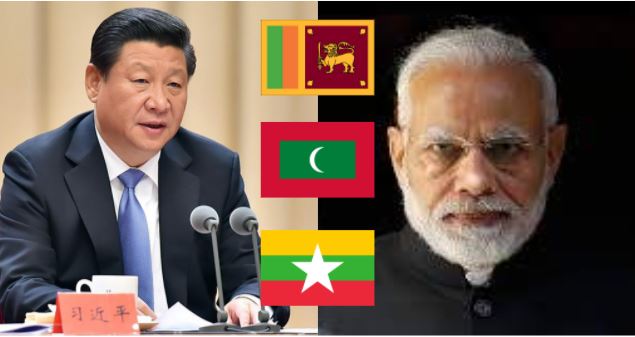 In the last few months, the Modi government has not only ensured to purge Chinese investment in India, but also to neighbouring countries like Sri Lanka, Maldives, and Myanmar.

Last month, Sri Lanka’s newly appointed Foreign Secretary Jayanath Colombage, said the island country would pursue “India first” approach in strategic and security matters. “That means Sri Lanka will not do anything harmful to India’s strategic security interests,” said Colombage, who was the chief of the Sri Lanka Navy between 2012-14 and has been appointed foreign secretary now.

Also, he said that Hambantota port with China was a mistake and the Sri Lankan government will take a very cautious approach towards Chinese investments in the coming days.

In another island country in the Indian Ocean, Maldives, the Chinese projects are getting closed one after another since Mr Yameen, a Chinese stooge who committed gross human rights abuse in the country surprisingly lost the Presidential elections in September 2018. Mr Nasheed, a long-time ally of India who was jailed by Yameen, holds the reins of power under the Presidency of Ibrahim Solih.

The US has signed a framework for defense cooperation with the Maldives with the intent to deepen engagement in support of maintaining peace and security in the Indian Ocean and cull the threat of Chinese encroachment.

Reported by TFI, New Delhi had last month announced that it was going to provide half-a-billion dollar funding to the island nation for several Infrastructure projects that will, in turn, ‘change the face of the archipelago’.

The Greater Malé Connectivity Project (GMCP) is being billed as the largest ever infrastructure project in the country. The project will connect the capital city of Maldives- Malé with Villingili, Thilafushi and Gulhifalhu via bridges and causeways of a total length of 6.695 kilometres.

India has become, once again, the primary ally of Maldives and the island country has shut the door for Chinese investment in infrastructure projects.

On the other hand, Myanmar has been continuing on its path of pushing back against Chinese debt-trap game plans. Xi had visited Myanmar only in January this year, and had signed a series of agreements, which included the inking of a letter of intent on the development of Yangon City, including a new city project. The New Yangon City project is an element of the proposed China-Myanmar Economic Corridor (CMEC), which is part of the Belt and Road Initiative (BRI) – Xi Jinping’s flagship intercontinental infrastructure project.

Myanmar has now opened up the Yangon city project for international firms as well, leading to compartmentalisation of the project.This comes as a huge pushback against China, and for the CCP, it is no less than a major setback. Earlier, China Communications Construction Company (CCCC) was all set to solely undertake the project in its entirety, which would help China seamlessly trap Myanmar under the burden of an extravagant debt, the geopolitical benefits of which it would reap over a prolonged period of time.

Myanmar is known as Suvarnabhumi (Golden land) in Sanskrit, given its richness in oil, gas, minerals, timber, forest products and hydropower potential. China aimed to exploit Myanmar’s natural resources but now one after other project is getting cancelled. The Myitsone dam project, a huge hydroelectric dam on Myanmar’s Irrawaddy River that is the largest source of freshwater in the country, was stopped due to widespread protests. Two other Chinese projects- Letpadaung copper mine and Kyankpyu port- have also witnessed widespread protests from the people of Myanmar and might get cancelled very soon.

So, in just the last few months, most of the neighbouring countries except which are ruled by Chinese puppet regimes like Nepal and Pakistan have blocked Chinese investment in their country. Just like India, they are throwing Chinese players out of their most important projects and sectors. And, Indian government is a party in these decisions by assuring these countries that it will finance those projects or get allies like the US to do the same if required.

Pakistan wants to dominate Afghan affairs and be a major player, but Pakistani Taliban is giving them hell

After Belarus, Putin gives another shocker to Xi Jinping. This time in Montenegro