Xi Jinping wants to hide his failures at domestic level 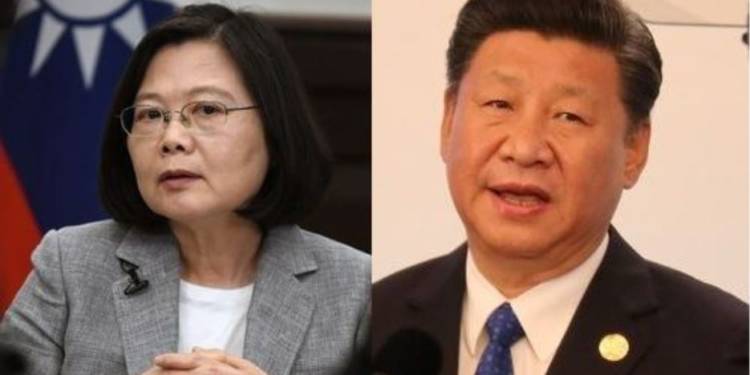 The modern day incarnation of Adolf Hitler, Chinese President Xi Jinping wants to project himself as a leader who will bring back China’s “lost glory”. To mask his failures at the domestic level be it the economy, the food crisis and of course the pandemic, Xi Jinping, in a bid to rally the nation behind him, has unleashed an ambitious expansionist policy with China now having territorial disputes with more nations than it shares its borders with. However, no amount of bravado is enough for Xi, if he fails to bring back Taiwan into China’s fold. Taiwan has never been more closer to diplomatic recognition and creating its own identity than ever which has busted Xi Jinping’s balloon. Hence, now China is threatening to ‘wipe out’ Taiwanese President Tsai Ing-wen with war.

China has been made uneasy after the visit of the highest-ranking U.S. State Department official, Keith Krach to Taiwan in over 40 years as the island nation takes determined steps to get diplomatic recognition. Chinese propaganda mouthpiece Global Times has threatened to “wipe out” Tsai Ing-wen with war if she were to violate the Anti-Secession Law.

A day after the US Under Secretary of State for Economic Growth, Energy, and the Environment, Keith Krach attended a dinner with Tsai, Global Times took to Twitter to threaten Tsai as the mouthpiece admonished Tsai for “playing with fire” by pledging deeper ties with the US.

“If any act of her provocation [sic] violates the Anti-Secession Law of China, a war will be set off and Tsai will be wiped out,” wrote the editors of Global Times.

Voice:Taiwan leader Tsai Ing-wen, who pledged deeper ties with the US at a dinner for a visiting senior State Department official,is clearly playing with fire. If any act of her provacation violates the Anti-Secession Law of China, a war will be set off and Tsai will be wiped out pic.twitter.com/hPZl42dVb1

At the centre of the controversy is the anti-secession law which has the sole aim of preventing “Taiwan’s secession from China” and promote reunification. The bill promulgated in 2005 after the separatist movement led by Chen Shui-bian gained traction, has never been accepted by Taiwan.

China’s state mouthpiece, CGTN states that, “The Anti-Secession Law can act as an important part of the legal framework governing China’s Taiwan policies and provide a legal basis for the central government to oppose and curtail separatist movements in Taiwan and safeguard peaceful reunification of China.”

It further states that the bill allows China to “crackdown on separatist movements in Taiwan by means of legal authorization.”

Earlier this month, in a tight slap on Jinping’s dreams of reunifying Taiwan, the island country said it would redesign its passport to highlight its own name.

This happened after Taiwan’s legislature passed a proposal by unanimous vote to remove ‘Republic of China’, printed in English, from the passport cover.

“Since the beginning of the Wuhan pneumonia outbreak this year, our people have kept hoping that we can give more prominence to Taiwan’s visibility, avoiding people mistakenly thinking they are from China,” said Taiwan’s Foreign Minister Joseph Wu. The move by Wu to address the virus as “Wuhan pneumonia” holds extreme significance and shows that Taiwan is ready to take China head-on.

Taiwan after successfully defeating the Wuhan coronavirus is the apple of the eye of countries across the globe. The US, Japan and Czech Republic have already started the process of formally recognising Taiwan. If that happens, Xi Jinping and his lackeys can kiss goodbye their dreams of taking back Taiwan by force.

Taiwan getting diplomatic recognition will be the worst possible scenario for Xi Jinping as it will severely hamper its expansionist policy, and will expose Jinping as a megalomaniac and weak, who couldn’t do anything when Taiwan was snatched from right under his nose. Jinping’s hopes of conquering Ladakh and South China Sea are already severely deteriorating and hence, the bully that China is, has attempted to threaten Tsai Ing-wen and Taiwan.

From being an Islamic Republic, Turkey is heading towards being a Chinese colony