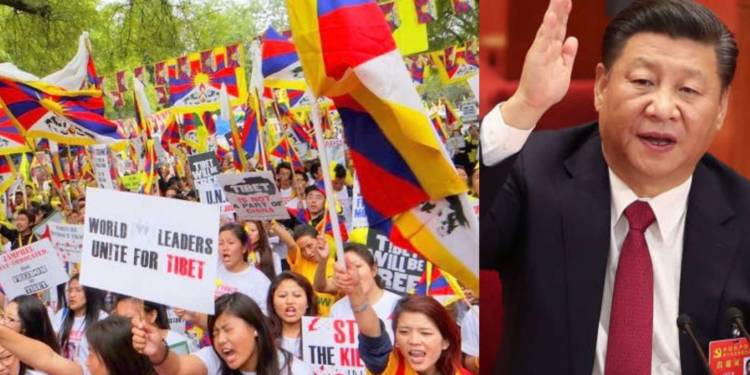 Tibet is now emerging as the new Xinjiang. The Chinese Communist Party has rolled out what many believe is a large-scale coercive programme to enrol Tibetans as forced labour, or workers who are made to unwillingly leave their households to work for Chinese industries as cheap labour. Reported by Reuters, Tibetans are being ‘trained’ for specific Chinese industry requirements, and then being employed either within the occupied region of Tibet, or being shipped to various Chinese provinces under a quota mechanism which bears a striking resemblance to the one which is used for shipping Uyghurs as forced labour throughout the Chinese mainland.

A link being seen between Tibet and Xinjiang is that of former Tibet Communist Party Secretary Chen Quanguo, who took over the same post in Xinjiang in 2016 and spearheaded the development of Xinjiang’s brutal internment camps regime, in which Uyghur Muslims are made to face the most horrific of human rights violations by the Chinese Communist Party. In Tibet, the programme has been expanded at an unprecedented pace in the current year, particularly since the intense military standoff between India and China began in late April/early May.

China is an insecure conglomeration of occupied territories which it goes around the world calling its own, illegally so, under the much touted ‘One China Policy’. India, meanwhile, has always shared its border with Tibet, and never with China. To this day, India shares its northern border with China-occupied Tibet, and not with mainland Chinese territory itself. Over the years, India has provided refuge to innumerable Tibetans who escaped the tyranny of the CCP. HH the Dalai Lama too has been given refuge in India, with a Tibetan government in exile currently operating out of India’s Dharamshala.

India has subtly begun playing the Tibet card against China, and the red-rogue country is aware of India’s drastic change in policy towards it. India unleashing its highly covert Special Frontier Force (SFF) on China in Eastern Ladakh, and publicly acknowledging the same has sent the CCP and its General Secretary Xi Jinping into a tizzy. The SFF, comprising of Tibetans alone, was tasked, along with the Indian Army to capture several dominating heights along Pangong Tso lake and some other locations along the de facto Sino-India border – the LAC.

India has a moral ground to use Chinese occupation of Tibet against the CCP perhaps like no other country in the world, including the United States. This is why a desperate China is looking to ship Tibetans to other Chinese provinces, in order to quell the imminent fires of a massive rebellion in the making. By employing Tibetans and using them as forced labour across the mainland and in regions within Tibet which are far from home, China will be able to disintegrate and disperse the Tibetan population from putting a united front against the CCP from within their land which is under Chinese occupation.

A notice posted to the website of Tibet’s regional government website last month said over half a million people were trained as part of the project in the first seven months of 2020 – around 15 percent of the region’s population. Of this total, almost 50,000 have been transferred into jobs within Tibet, and several thousand have been sent to other parts of China. Many end up in low paid work, including textile manufacturing, construction and agriculture, Reuters reported.

The Chinese consider Tibetans an uncultured, lazy and dirty people, who are not willing to work for the greater good of China. In fact, policy documents call for effectively eliminating “lazy people” in the province. The training centres also witness military-styled training of Tibetans, who are indoctrinated forcefully with Chinese Communist propaganda. Military dress and uniforms are not an irregular sight in such brutal training camps used to brainwash Tibetans, who have been subjugated by China against their will for decades now.

TFI had earlier reported how China was brutalizing Uyghur Muslims and using them as forced labour in order to fuel the growth of its industries in the mainland. Low pay, restrictions on their movement, graduation from ‘re-education’ camps, are all indicators of forced labour. One is reminded of Nazi Germany, and to nobody’s surprise, there is an eerie similarity between Hitler and Xi Jinping. The former used Jews and expendable forced labourers, while the latter is doing the same w.r.t Uyghur Muslims. During World War II, while the Nazis ran what they called Arbeitslager or labour camps, China is today storing Uyghurs in “re-education” camps.

China is stepping up its game to brutalise Tibetans just like it is continuing to torment the ethnic Uyghur population in its occupied Xinjiang province. The emergence of training centres, shipping of Tibetans as laborers possibly coerced into the jobs, low pays, ideological indoctrination are just a few indicators of the Xinjianganisation of Tibet. India and the world community at large must put an end to Chinese excesses in both these provinces, using whatever force necessary.