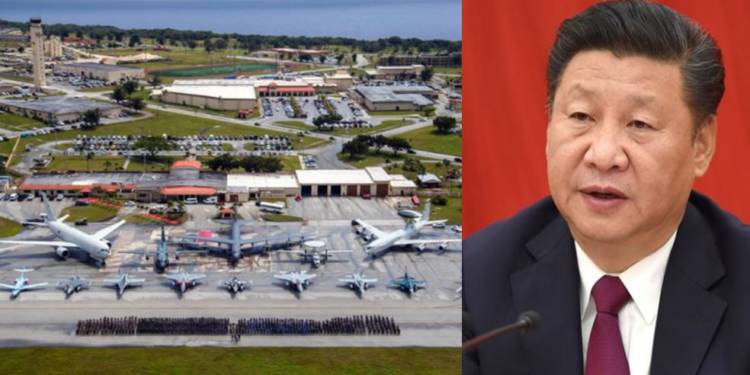 As South China Sea tensions escalate between China and the United States, Beijing seems to be getting rattled. But why does China fear the US military? Is it because if the US Navy’s gigantic aircraft carriers? Or is it because of the US Air Force’s superior fighter aircraft? The latest Chinese propaganda reveals that China is really worried about the Pentagon’s biggest strategic asset in the Pacific- its “permanent aircraft carrier” Guam.

The Chinese People’s Liberation Army Air Force (PLAAF) has released a shoddily prepared propaganda video that shows nuclear-powered H-6 bombers carrying out an assault on what looks like the Andersen Air Force Base located on the Guam Island. Beijing usually releases such propaganda videos when it is on the backfoot at the ground level and feels compelled to play dubious mind games.

The video was posted by the PLAAF on its Weibo account, amidst China’s military drills near Taiwan following a US State Department official’s visit to Taipei. China had to release the controversial propaganda video because of the significant strategic advantage that Guam offers to the United States.

Guam is a game-changer in the US-China rivalry within the Pacific for two primary reasons- one, the strategic location of the Island and two, the heavy militarisation carried out by the US in Guam with an eye on China.

Guam Island is located in the Pacific between the US mainland and China. But it is closer to China and lies only 1,800 miles east of China. Now, here is the real deal. China and the Guam Island, or the entire Greater Pacific are separated by the “First Island Chain” stretching from Japan through the Philippines to Indonesia.

The First Island Chain countries in the Western Pacific are themselves facing military aggression from Beijing and are therefore interested in encircling China in its own backyard. If push comes to shove, the US can use the island against China, but Chinese aircraft will always face an uphill task in first breaching the First Island Chain and then attacking the Guam Island.

The island is nothing less than a potent military outpost for the US very close to China’s conflict zones in the South China Sea.

The US has actually started using the island. The Island already has a heavy military presence with around one-third of the Island getting devoted to military purposes. Fighter jets, bombers, submarines and a missile defence system- the Guam Island has everything to make it an unsinkable aircraft carrier from which the US Navy and Air Force can pack quite a punch.

Moreover, the US has all kinds of military infrastructure at Guam to strengthen its position including the Andersen Air Force base, Naval bases,  a Coast Guard sector and a Joint Force Headquarters. The US can therefore use Guam Island against China at will.

In the recent past, the US has also used Guam Island for power projection. When China initially turned belligerent in the South China Sea, the US had put on show an amazing formation- an ‘elephant walk’ of its bombers at the Guam Air Force base.

China was then in the belief that the US military was in a weak shape due to the Coronavirus outbreak, but the signal coming from the American military was that Guam will always give the US an upper hand, even if the gigantic American aircraft carriers have to be docked temporarily.

In July this year, Australia, Japan and the US came together for a huge exercise in the Pacific centred on Guam. This is again a show of how the US and its allies can access the highly militarised Guam Island at will while China remains encircled in the Western Pacific. In fact, the US wants to bring the entire QUAD-in Guam with plans to train Indian, Japanese and Australian fighter pilots in Guam.

The US policy is to militarise the Greater Pacific Islands located outside the First Island Chain that surrounds China. Even apart from Guam, the US is also building a heavy military presence in Wake Island located only 1,500 miles away from the island. Similarly, Australia and the US are also jointly developing the Lombrum Naval Base in Papua New Guinea, so that China can be further cut to size in the Pacific region.

The PLA knows that Guam Island would prove to be the cause of its downfall if things escalate between the US and China. Therefore, China seems rattled as its biggest nightmare in the Pacific- Guam is coming true.