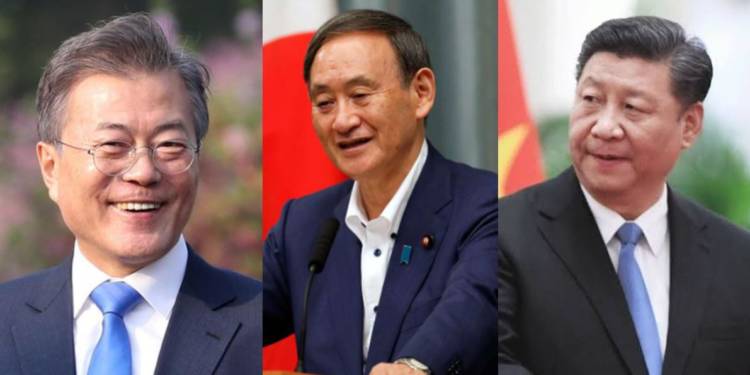 The Chinese enthusiasm around Shinzo Abe’s exit as the Prime Minister of Japan is fast coming to terms with harsh realities. Beijing had heaved a sigh of relief when Abe announced his resignation in hope of a softer Japanese PM. But Abe’s successor, Yoshihide Suga, isn’t proving to be China’s friend either. In fact, there is more bad news for China as Suga is mending ties with China’s arch-rival, South Korea.

Suga’s accession to power has created scope for a rapprochement between South Korea and Japan. Despite a common threat in China and its client state North Korea, Seoul and Tokyo were not getting along well while Shinzo Abe was in power, largely due to the perception of Abe as a right-wing, nationalist leader and the bitter past of Japanese atrocities on the Korean Peninsula. But with Suga in power, South Korea and Japan are showing more readiness to engage with each other.

In fact, Yoshihide Suga has taken some big steps to repair the frayed ties between South Korea and Japan. The Japanese PM said, “I told President Moon that we cannot leave our current very difficult relations where they are now,” following a telephone call with the President Moon Jae-in. Suga added, “Cooperation between Japan and South Korea, as well as between Japan, the United States and South Korea, is crucial to deal with North Korea and other issues.”

The Japanese Prime Minister also said that Japan would continue to “firmly seek appropriate action from South Korea”. Suga is, therefore, ready to placate South Korea’s concerns about Japan which is central to any improvement in the bilateral ties of these two American allies.

In fact, the telephone call between Moon and Suga too was requested by Seoul. And last month the South Korea President had even written to Suga expressing his readiness to sit down any time and improve relations between Seoul and Tokyo.

With Abe out of power, there are signs of South Korea’s insecurities towards Japan taking a backseat. There are still some lingering wounds that date back to the Japanese occupation of the Korean Peninsula between 1910 and 1945. Japan and South Korea were engaged in pitched battles since the seventh century. In 1910, Japan invaded Korea effectively turning it into a colony.

Last year, the bitter past of South Korea-Japan relations came up again. While Seoul feels that Japan should pay reparations for the atrocities committed during the era of the Japanese occupation of the Korean Peninsula, Tokyo considers the issue to be settled. While such differing historical perceptions aren’t uncommon between South Korea and Japan, they took a turn for the worst last year.

In 2018, South Korean Supreme Court ordered Japanese companies to pay reparations to ageing Koreans who were used as forced labour during the wartime years. But Japan saw the ruling as a violation of a 1965 treaty between Seoul and Tokyo that involved Japanese payments in lieu of restoration of diplomatic ties. Thereafter, in August 2019, Japan removed Seoul’s favoured trade partner status and imposed exports controls on chemicals vital to South Korea’s electronics sector.

Therefore, Suga has taken over Japan’s Prime Ministership at a time when the complicated history shared by South Korea and Japan threatens to spill over into a political and trade stand-off. But there seems to be a realisation in both Seoul and Tokyo that there is no use fighting over historical disputes that aren’t even remotely connected to the present geopolitical realities.

Today’s reality is that both South Korea and Japan are American allies. Both of them face a similar threat, that is, China in their backyard. While Japan and China are fighting over the Senkaku Islands chain in the East China Sea, South Korea and China share an EEZ dispute in the Yellow Sea, apart from Beijing’s support for Seoul’s arch-foe, North Korea.

And then, both Japan and South Korea have to face the threat of a China-backed ‘Nuclear’ North Korea. Japan and South Korea share too much of a common threat to be fighting against each other over historical disputes which can now be resolved bilaterally. Suga and Moon Jae-in seem to realise that they need to come together and take on China. As South Korea and Japan shed their historical bitterness, a major obstacle has been removed, and it is more bad news coming for China from Tokyo.