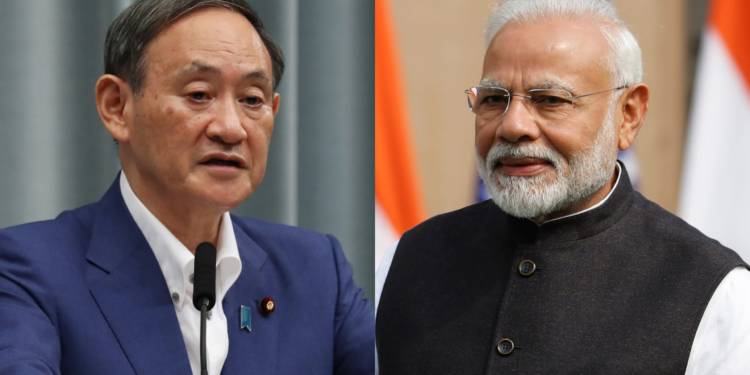 On Friday, PM Modi and his Japanese counterpart Yoshihide Suga had their first conversation. All eyes were focused on the content of this conversation, as it would be to define whether the new Japanese PM will follow within his predecessor’s foreign policy framework or will follow a new policy as was being projected by the Chinese media and analysts. The period saw many opinion pieces in Chinese and some Japanese print media regarding the possibility of Suga San will try to ease the tensions with China and would move away from the Abe’s Free & Open Indo-Pacific commitment. However, the Friday conversation buries all these speculations six feet deep.

PM Modi tweeted “Had a very good conversation with PM Suga Yoshihide. We exchanged views on the tremendous progress in our relationship in the last few years, and the future direction of our Special Strategic and Global Partnership”. He also invited Mr Suga for the upcoming India-Japan Summit, in a way signalling the continuity of the bilateral commitments.

These points were further concretized by the Ministry of External Affairs press release, which stated: “The two leaders agreed that the India-Japan Special Strategic & Global Partnership has made great advances over the last few years and expressed their intention to further strengthen this relationship based upon mutual trust and shared values”.

The most important point in all this is the two leaders agreeing on further strengthening the India-Japan relationship based on mutual trust & shared values. Some of the shared values which come to mind are commitment to democracy, Liberal International World Order, Multipolarity, Free and Open Indo-Pacific for easy movement of goods as well as smooth conduct of international trade & commerce.

The Chinese hope for a more docile Japanese leader was borne out of its strangulated position in the geopolitics of big & great powers. Beijing has seen its space for foreign policy manoeuvrings has been steadily decreasing and in these desperate times, it expected this to provide a breathing space for the Chinese to focus on other regions. However, just like the Chinese dream of becoming a single-pole & hegemon in Asia, this hope was based in clouds which are fading away quite fast. If anything, the sheer amount of activities which India & Japan are engaging this week and in the coming months are a reminder that Japan’s new dispensation is not only continuing the proactive defence formula of Abe-san but taking it to next level by formulating multilateral agreements and operations in Indo-Pacific. Be it QUAD official meets, Australia, USA & Indian leaders call with Suga san, India-Japan JIMEX, QUAD Ambassadors meet in Brussels, India-Australia-Japan supply chain resilience meeting, India-Japan signing ACSA or Australia-Japan-USA-South Korea Pacific Vanguard exercise.

The QUAD ministerial meeting is expected to take place next month in Tokyo. This will be the first-ever formalization of a multilateral arrangement among the big democratic powers to safeguard and maintain the status quo in Indo-Pacific and keeping the sea-lanes of international trade and commerce open and free for all. Thus, any and all speculations and scare in India regarding the change in the Japanese foreign policy do not hold ground and should be taken as Chinese Whispers.

The new Japanese PM is building on the bedrock of Abe-san’s work and thought, he is trying to ease relations with South Korea, being fellow allies of the USA, they need a semblance of friendly ties, which may sound difficult to reach given the historic baggage, however, it is worth pursuing and Suga-san is doing the same. Suga-san’s policy of keeping allies and like-minded powers in confidence and building bridges with South Korea is a very welcome step in the face of an overly aggressive China which sees the COVID-19 pandemic as a window of opportunity to aggressively further its geopolitical aims.

Within a few days in office PM Yoshihide Suga has taken all the allies into confidence and put all the speculations of changing foreign policy to rest. This will go a long way into dousing the speculative fire among allies and will put the democracies interested in maintaining the Liberal Democratic order into a stronger position with respect to the Chinese Communist Party. The coming QUAD ministerial-level talk is promising and the Suga administration is bound for taking on more responsibilities in Asia going ahead in partnership with its allies & friends.