India shows a confused Duterte the way, and that leads the Philippines far away from China 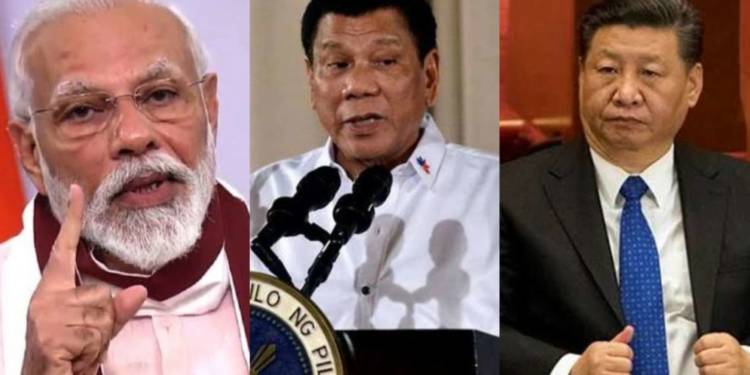 India is snatching China’s last hope away from it. While everyone in the Indo-Pacific and the ASEAN is snubbing the Dragon, the Philippines was the only country that still seemed to be confused between China and the United States. The Philippines kept swinging between the two giants. But now it seems that India is ending Manila’s confusion by giving it the desired impetus.

India and the Philippines have reached an understanding to consider a bilateral Preferential Trade Agreement (PTA) to take advantage of the massive untapped potential for a strategic partnership in the region. This is a part of New Delhi’s bid to help the Philippines choose the free world over the Communist-authoritarian giant, China.

The matter was raised by the two sides at the 13th Meeting of the Joint Working Group on Trade and Investments (JWGTI) on September 17. Though not as good as a Free Trade Agreement, the PTA is a bilateral agreement that would aim to reduce and eliminate tariffs on commodities of mutual interest. New Delhi is therefore creating a new option for Manila in the Indo-Pacific away from China.

For the Philippines, Trade and Industry Undersecretary Ceferino S. Rodolfo said, “PH is eager to conclude one with India not only to improve current trade levels in terms of value and volume but also in the breadth of products to be covered as current trade is highly concentrated on a few products.”

On the other hand, Joint Secretary Anant Swarup said, “India recognizes the benefits of negotiating a PTA with the Philippines”, and called upon both sides to consult authorities and kickstart negotiations for a PTA.

In fact, India is bringing all its economic might into the picture, with the aim of securing Manila’s tilt towards the democratic world. Therefore, as a precursor of the PTA negotiations, the Philippine Chamber of Commerce and Industry (PCCI), Confederation of Indian Industry (CII), Embassy of India in Manila, and the Embassy of the Philippines in New Delhi came together for a webinar on India-Philippines Enhancing Bilateral Economic and Trade Relationship.

The two sides are actually recognising areas of common interest and a whole galaxy of opportunities across a range of sectors, including pharmaceuticals, IT, and Financial Technology. And therefore, New Delhi is creating more hope for the Philippines.

India’s proximity to the Philippines changes equations upside down. Till now, the Philippines President Rodrigo Duterte has refused to make a final choice between the United States and China. Duterte feels that both the giants have a lot to offer to him and to his country in terms of money and investments, and therefore the Philippines President keeps searching for the best possible deal. Sometimes, he becomes entirely anti-China and pro-US, and sometimes he starts snuggling China.

Presently, Duterte and the Philippines are pro-US, but for how long? Manila’s volatility is a big challenge for the United States as also the QUAD- an informal alliance compromising India, the US, Japan and Australia, to contain China. India however has the most pragmatic solution to this challenge. New Delhi is giving the Philippines what it needed by opening up the prospect of investments and trade with India.

A QUAD member like India getting closer to the Philippines is a turning point in ongoing the US-China powerplay for greater influence in Manila. India’s entry tilts the balance in favour of the US and its allies as far as the Philippines is concerned. Manila might have been confused all this while, but India is showing it the way ahead and driving the Southeast Asian nation far away from China.

New Delhi is therefore killing the Dragon’s last hope in the Indo-Pacific, by pulling the Philippines out of China’s grip.