This could result in a civil war 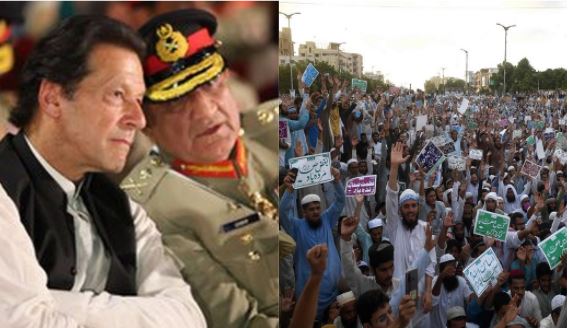 Imran Khan is perhaps facing one his toughest political challenges as his nascent government looks to be on the brink. The charges of corruption on Khan’s Special Assistant on Information and Broadcasting Lt. Gen. Asim Bajwa have rocked Pakistan with the Opposition standing united and protesting against the Imran Khan administration and the increasing interference of the Pakistan Military in the country’s domestic politics. The Pakistan deep state in order to save their poster boy, has perhaps now fabricated an unrest between the Sunnis and the Shias, which has the potential to spillover into a civil war.

Pakistan was never a safe haven for the country’s minorities be it the Hindus, Christians or the Ahmadiyas as the communities have faced unprecedented atrocities over the years. Now, the radical Sunnis have risen up against the Shias as the Sunni conservative groups and Deobandi followers have organised massive rallies in Karachi with the participants chanting anti-Shia slogans and calling the Shias as Kaafirs i.e. non-believers. Interestingly, the radical Sunnis have also called to ban the procession of Muharram.

While the Shia Sunni discord has always plagued the Islamic world and till date continues to be a bone of contention, the discord has been non existent in Pakistan mainly because of the fact that the country’s founder, Mohammad Ali Jinnah, was a Shia. Now, he country’s 21% Shia population is under fire from the radical Sunnis which is nothing but the handiwork of the Pakistani deep state to save Imran Khan.

The timing of the protests is strange and crucial at the same time as it comes at a time when Imran Khan is cornered after retired Lt General Asim Bajwa’s scam came to the fore. The Bajwa family empire has grown in sync with his rise in the Pakistani Military.

It is alleged that the Bajwa family owned business empires in four countries which included pizza franchises, companies, real estate and commercial properties. Unsurprisingly, Bajwa, who is also the chairman of China-Pakistan Economic Corridor (CPEC) labelled the allegations as “malicious propaganda”.

Imran Khan who positioned himself as an anti-corruption crusader before his elevation as the country’s Prime Minister chose to give a free pass to Bajwa after the former rejected Bajwa’s offer to resign from his post of PM’s advisor.

Bajwa has failed to battle the allegations of corruption which run to the tune of $64 billion and has often looked edgy during his media interviews when pressed upon the questions of his billion dollar fortune. However, the anti-corruption crusader that Imran Khan is, it was perfectly fine if Bajwa didn’t show an iota of evidence which proved his innocence.

Ironically, at the same time the Imran Khan government has undertaken a massive crackdown on the opposition camp leaders under the garb of corruption. Nawaz Sharif’s yet another awakening where he bolstered and untied the opposition kept Khan on the tenterhooks. Importantly, Nawaz Sharif severely criticised the Pakistani Army as he insinuated that Imran Khan has been ‘selected’ instead of being ‘elected’ as he panned the country’s military for its constant interference in Pakistan’s civilian government.

Expectedly, Imran Khan responded by nabbing Nawaz Sharif’s younger brother and the country’s leader of opposition, Shahbaz Sharif who was sent on a 14-day physical remand by an accountability court after he was arrested by the National Accountability Bureau with charges of money laundering.

In a move which is being seen as the “victimization” of opposition leaders, Pakistan’s former President, Asif Ali Zardari was indicted by an anti-corruption court in a money laundering case. Imran Khan has also broken the unspoken rule of Pakistani politics of not going after family members as Khan has systematically targeted Sharif’s younger brother Shahbaz and his daughter, Maryam. Zardari too, was indicted with his sister, Faryal Talpur.

The timing of the recent events have raised suspicions that the Pakistani deep state has become active in the light of the united opposition call for protests next month to demand Khan’s resignation. By intimating the Shia-Sunni discord, Pakistan is playing with fire, which might spill over to a fully blown civil war.

India shows a confused Duterte the way, and that leads the Philippines far away from China