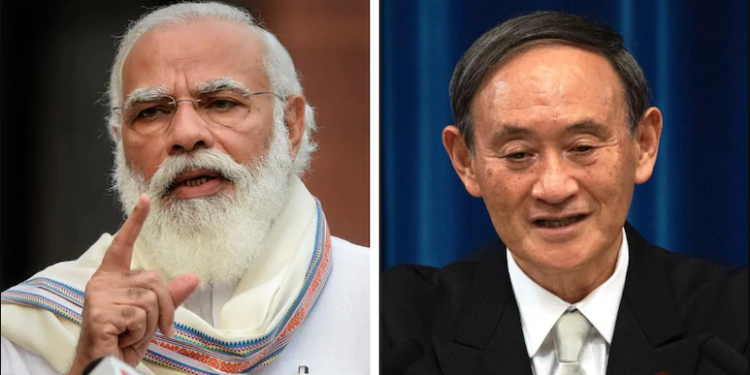 China is being given some of the most decisive blows in the Indo-Pacific, as the QUAD- an informal strategic group comprising India, Japan, the US and Australia seems to have made up its mind to go all out in containing China’s influence. India and Japan- the two key Quad constituents are now wooing ASEAN members in a bid to kick China out of Southeast Asia.

First, India attempted to take the Philippines away from China by working towards a Preferential Trade Agreement (PTA) with Manila. And now Japan’s Prime Minister Yoshihide Suga is eyeing two other ASEAN members- Vietnam and Indonesia as a part of his first overseas trip after coming at the helm of affairs.

Japan and India are thus turning the tide against China in Southeast Asia, which happens to be at the core of the Quad’s Indo-Pacific strategy to check Beijing’s growing influence. While the Southeast Asian nations like Vietnam, Indonesia and the Philippines are having common interests with the Quad, including their shared concerns against Chinese expansionism, belligerence and its Salami-slicing tactics in the South China Sea, it seems that the ASEAN hasn’t deserted China in the Quad’s favour.

The Southeast Asian nations remain ambivalent. On the one hand, they have eye security cooperation with the Quad, but, on the other hand, they find it hard to forgo the offer of China’s huge market, investments and trade potential. Countries like the Philippines, therefore, haven’t made a final choice as of now.

It is in this context that India and Japan are now going the extra mile to ensure that the ASEAN members choose the Quad over China. While India has already made a lucrative offer to Manila, Suga would try to advance his predecessor Shinzo Abe’s vision of a “free and open Indo-Pacific”, in case the Japanese PM’s visit to Indonesia and Vietnam materialises.

Japan is capitalising upon the growing anti-China sentiment in both Vietnam and Indonesia. Vietnam has been one of the fiercest critics of Chinese expansionism in the South China Sea, while Indonesia is also growing wary of China over the latter’s aggressive manoeuvres in Indonesian waters.

Though Suga’s visit will only be finalised after examining the COVID-19 situation in Japan and the two Southeast Asian nations, Suga has at least shown the commitment towards following his predecessor Shinzo Abe’s Indo-Pacific policy. As a matter of fact, even Abe had visited Vietnam and Indonesia after coming to power in 2012, and Suga seems to be taking his legacy forward.

Here, the Japanese PM is also lending a helping hand to Japan’s security ally- the United States, which has been battling China for greater influence in Southeast Asia. In fact, even in his inaugural news conference, Suga had said, “I will pursue diplomatic policies based on a functional Japan-U.S. alliance.”

Japan’s Chief Cabinet Secretary Katsunobu Kato too has underscored the importance of a “free and open Indo-Pacific”. Kato said, “The diplomatic environment surrounding Japan is becoming harder to foresee and control, given the growing national particularism and the U.S.-China tensions. … We would like to strategically and steadily promote the vision of a free and open Indo-Pacific by working with partners sharing the same values.”

Needless to reiterate, references to a “free and open Indo-Pacific,” in context of Southeast Asian nations is invariably a reference to the goal of hemming in the growing Chinese belligerence in the strategic waterways of South China Sea. While the Southeast Asian Nations are the ones directly facing belligerence in the disputed waterways, Quad members are concerned with Beijing’s bid to claim the entire South China Sea because it creates hurdles in freedom of navigation in the region.

Suga is therefore exploring and creating a lot of common ground between the Quad and Southeast Asia with his Indo-Pacific strategy. The US alone cannot help Southeast Asia swing away from China. Therefore, the latest bid by India and Japan to firmly back up Washington’s Indo-Pacific powerplay is going to be gamechanger. The Quad is finally in action and it seems that the strategic alliance is going to woo the entire region away from China.