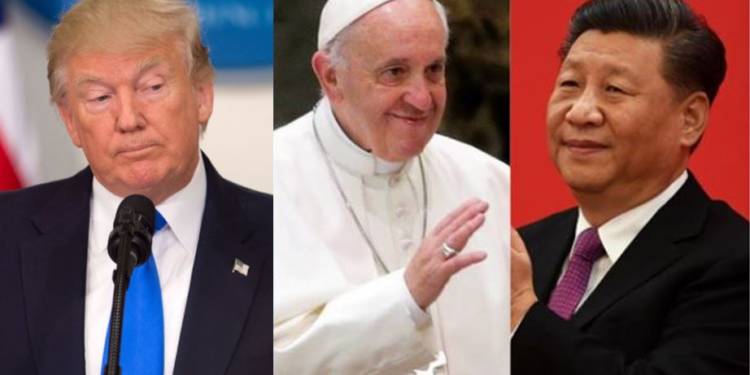 The Secretary of State Mike Pompeo has scheduled to visit the Vatican this week. However, the secretary has not been provided with an audience. Reuters reported that Vatican’s Secretary of State Cardinal Pietro Parolin and Foreign Minister Archbishop Paul Gallagher said Pope Francis had declined a request from Pompeo for an audience, as the Pope avoids meeting politicians ahead of elections.

The Pope has also been angered by the comments of Secretary of State, who criticized the deal between Vatican and China a couple of years back, and is due to be renewed by October end. The earlier TFI reportage has established just how fishy the deal is. The deal was struck in 2018 and gives the State-run Chinese Patriotic Catholic Association (CPCA) the right to choose a selection of nominees for bishop appointments, and the Pope makes the final appointment out of them. Therefore, it enabled the Communist regime in China to appoint Bishops for all practicality and with the official stamp of the Pope at the Vatican.

Mike Pompeo has instead addressed an audience at a symposium organized by Holy See’s US embassy in the Italian capital. Where, he reminded that the Pope is cutting a deal with the devil, stating“Nowhere is religious freedom under assault more than in China,”. He also added that“the Chinese Communist Party was looking to snuff out the lamp of freedom … on a horrifying scale”.

One can say these statements are politically motivated, with the US elections a month away and Trump trying to consolidate his Christian conservative voter base. However, the reaction of the Vatican has led to people questioning, what has irked the Pope so much? There are some voices in the realm of Foreign Policy mentioning that the Vatican is also doing its geopolitical realignment and the rise of China may have swayed the Pope towards the carrot teasing of Xi Jinping.

If one looks into the historical activities of Vatican, as recently as 2016, one can see that it has been pro-establishment, actively engaging in different activities all over the globe, and playing tag with great powers since the World Wars. It is no secret that countries which are engaging in the Geopolitics games are vulnerable to getting played, i.e., their voices being bought, forced to further the interest of some other country among others.

The Vatican was quite cozy with previous US presidents that were considered to be from the establishment or as per the new nomenclature, ‘the Washington DC types’. Donald Trump came to power with the exact slogan ‘drain the swamp’, and anti-establishment rhetoric. He became the voice of middle America or known as the bible belt. Sailing on a republican ticket and proudly flaunting his Christian credentials, even at that time in 2016, the view from the Vatican came out as Trump was not Christian enough.

Even after coming to power, the Trump presidency has been a reverse of any predecessor, be it a democrat or a republican. He has been asking for allies to pay a fair share if they want the United States to help them in anyways, he has started reducing USA’s soldiers on foreign soil, reversing the interventionist policies. As the relations of the Vatican have been comforting towards China, it seems Trump’s policies have not gone down well with the Vatican in some ways its strategic and economic interests have been hurt.

The Vatican may try to portray itself as an apostle of righteousness and truth, but the reality is far away from it. The pope is seeking to maximize his own interests. In the context of all that we have discussed the morality of the Pope is pretty low. TFI reported the papacy’s compliance in Beijing’s anti-religion crusade is surprisingly obvious. Not only has the Holy See abandoned Chinese Catholics, but it has conveniently skirted away from condemning gross human rights violations in Tibet, Xinjiang, Hong Kong or the ethnic Mongolians by a dictatorial-atheist regime seeking han-isation of entire China.”

As per the article published in DNA India, the dissidents claim that Chinese Communist Party pays Vatican 2 Billion USD to stay silent. During a recent interview on The War Room on June 20, Guo revealed that the CCP earmarks massive budget each year as part of its foreign policy, to secure the allegiance of foreign nations including the Vatican and Italy. As anyone who knows the Italian politics, cannot downplay the importance of Papacy in its national politics.

In the name of being a religious leader, Pope and his Vatican establishment have been following the policy of looking after their own economic interests, which certainly is not very enlightening. The only thing that can make any sense is that the Vatican is following a realpolitik geopolitical stance and looking after only its political and economic interests; it doesn’t mind if in the process those who believe in the Vatican and the Pope suffer. It has been a new low and needs to be seen how will it affect the people’s faith in the papacy.

Not stopping at Russia’s Vladivostok, China is eyeing a piece of Alaska in the Arctic