Not stopping at Russia’s Vladivostok, China is eyeing a piece of Alaska in the Arctic 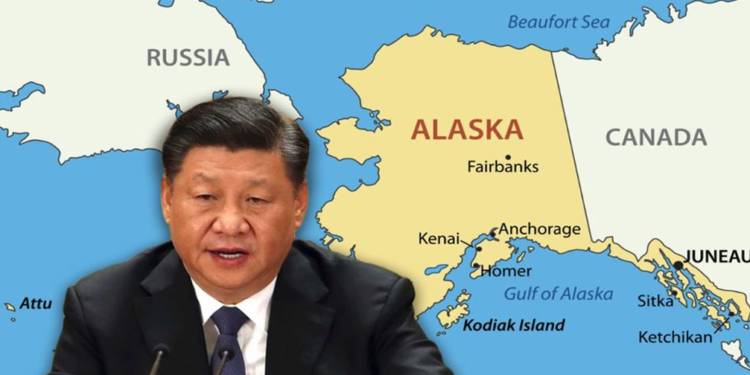 As Chinese President Xi Jinping’s brand of Chinese expansionism takes shape, Beijing seems to be turning belligerent in the entire Indo-Pacific region from the Himalayas bordering Southern China to the Russian Far East territory, including the city of Vladivostok, towards China’s Northeast. But one would be grossly mistaken to think that Chinese expansionism will stop at Vladivostok. China’s expansionism is going to turn polar and go as far as the Arctic.

In fact, China’s preposterous claim over Vladivostok is actually an attempt to flex muscles in the Arctic. And the aftershocks of Chinese expansionism are going to be felt as far away as the United States. The White House need not look very far as China is already eyeing a strategic US territory- Alaska as a part of the Dragon’s attempt to gain a foothold in the Arctic, by the time the climatically fragile region melts down and becomes amenable to international trade and commerce.

Interestingly, Alaska which was purchased by the US from Russia way back in 1867. At that time, many wouldn’t have predicted that Alaska would once become a strategic hotspot and, therefore, 1.519 million square kilometres of Russian territory was sold to the US for a meagre sum of 7.2 million Dollars. In present-day prices, the US is estimated to have paid Russia 3.19 Dollars for every hectare of Alaska, and in 1867, the deal cost every American taxpayer around 5 Cents.

Alaska’s present-day value is, of course, much higher as three formidable giants- Russia, the US and China- battle it out for the melting Arctic that is expected to be ice-free by 2044, hence, literally opening up a sea of opportunities in terms of trade and naval activities. For China, gaining a stronghold in Alaska is indispensable given its proximity to the Arctic and strategic location.

China calls itself a “Near-Arctic State”, though it happens as far away from the Arctic than Poland. So, how does China reach the Arctic? The Chinese plan seems to be to stake claim over the Russian Far East that could take Beijing as far as the Bering Strait- a strategic chokepoint which is only 55 miles wide at its narrowest point and divides the Russian Far East from Alaska. It is the only marine route from the Pacific Ocean to the Arctic, making Alaska of incredible importance for China’s Arctic ambitions.

It is, therefore, no surprise that China is gaining a lot of interest in Alaska from hydrocarbons exploration to tourism. Chinese proximity to Alaska is bound to be seen at loggerheads with Trump administration’s trade wars against Beijing. Therefore, when Xi Jinping visited the US in 2017, he stopped at Alaska, and not the Silicon Valley after leaving from the Mar-a-Lago summit with US President Donald Trump.

There is a reason why Jinping wanted to discuss business in Alaska and not California, which is otherwise the hotspot of American business circles. China wants to invest heavily in Alaska’s oil and gas exploration sector.

During Xi Jinping’s 2017 visit, the then Alaska Governor Bill Walker had pitched his state’s Liquefied Natural Gas (LNG) potential before the Chinese President. When Trump visited China a few months later, the White House announced a Memorandum of Understanding for the 43 billion US Dollars Alaska LNG project.

China is also promoting tourism in Alaska. Almost a decade ago, Alaska was barely known as a destination to Chinese tourists, but it is now becoming a favourite amongst many Chinese travellers. And apart from all the soft power that China is bringing to the table, five Chinese ships were spotted by the Pentagon off Alaska coast in 2015 exposing China’s expansionist ambitions in the region.

This is how Chinese expansionism works- investments and soft power display are generally followed by maritime face-offs as Chinese Communist hardliners bring in so-called historical maps or even otherwise stake a claim on territories that vest in other countries or powers.

Of course, China’s interests are hardly limited to Alaska. The Dragon wants to gain complete control of the Arctic which will be melting extensively over the next few decades to open new shipping lanes helping Beijing get over the “Malacca dilemma” and also fuel the energy-hungry Dragon’s hydrocarbon needs.

And to some extent, the Arctic is already opening up. While China wants to build a ‘Polar Silk Road’ in the Arctic, Russia’s Northern Sea Route (NSR) through the Arctic is expected carry freight in excess of 32 million tons in the ongoing year.

Till now, the US was seen as somewhat complement in the matter of Chinese interference in Alaska. It seemed as if the US was unwittingly letting China gobble up Alaska, just like Australia couldn’t stop China’s commercial invasion into its Victoria State. But the US might not be as oblivious of the China threat in Alaska.

Last year, Alaska’s present Governor, Mike Dunleavy, a Republican, who stormed to power in 2018, even scrapped a plan to partner with China on a major natural gas over fears of ‘risks to the state’. On its own part, Beijing remains relentless as far as Alaska is concerned.

Beijing keeps pushing for greater trade with Alaska, even though US-China trade ties are in a quagmire. In April, when the Chinese virus was taking grip of the United States, Beijing had sent 3 million Dollars worth of Personal Protective Equipment (PPE) to Alaska, in a bid to woo the American state.

Alaska is thus on the path of becoming the site of a major geostrategic flashpoint. Alaska could make the ongoing Sino-US rivalry much more serious and direct. At some point, it will also necessitate cooperation between the US and Russia, both of whom are Arctic Coastal states. They are the ones facing the wrath of China’s “Near-Arctic” ambitions and as such, the US must think of realigning its Russia strategy if China is to be kept away from Alaska.