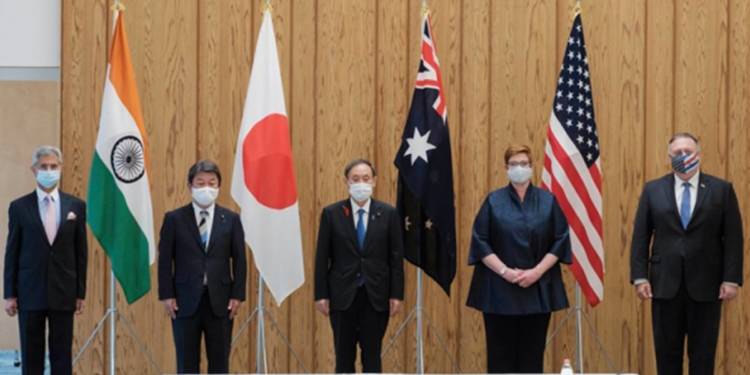 The second QUAD ministerial meet held on 6th October saw the foreign ministers of India, Japan, Australia and the USA brainstorming on the issues and special circumstances the world is facing. The meet held in Tokyo was focused on the issues about the geopolitical construct of Indo-Pacific, and the cooperation for the post-pandemic recovery.

The consonance seen in the press releases of all the four QUAD countries showcases they have made up their mind to take on the belligerent Chinese right by the horns.

The Australian Foreign Minister Marise Payne stated, “The Quad has a positive agenda. It’s a diplomatic network that assists us, as democracies, to align ourselves in support of shared interests. We believe in a region governed by rules, not power.” She indirectly targeted China while emphasizing the need for countries with similar values and world-view to come together for the maintenance of free and open Indo-Pacific. She also mentioned that for these purposes, the USA, India and Japan are Australia’s top friends in the region.

The statements by Indian External Affairs Minister S. Jaishankar reiterated the importance of the QUAD as a grouping for the Indo-Pacific region. He stated, “We remain committed to upholding the rules-based international order, underpinned by the rule of law, transparency, freedom of navigation in the international seas, respect for territorial integrity and sovereignty and peaceful resolution of disputes.”

The Japanese statement was also on the same lines. In addition to all others, Japan also discussed the regional conflict areas like North Korea, East and the South China Sea. He was also careful of recognizing the efforts of non-regional players in maintaining free and open Indo-Pacific.

Out of the four Ministers, Secretary of State Mike Pompeo was least discrete as he mounted attacks on China from the very start. The US reiterated all the points made by other fellow members as well as stating that the COVID-19 crisis was made infinitely worse by the Chinese Communist Party’s coverup and that is why it turned into a global pandemic.

These statements took a direct hit at China, and in an interview to the Nikkei Asia, Pompeo said, “As partners in this Quad, it is more critical now than ever that we collaborate to protect our people and partners from the CCP’s (Chinese communist party) exploitation, corruption and coercion.” He also hinted at institutionalizing the QUAD and expanding the institutionalized QUAD.

All the four ministers discussed on the wide range of issues about the Indo-Pacific as well as other areas of mutual interests. They also agreed to meet regularly, while Jaishankar emphasized on the post-pandemic recovery and said that the QUAD countries should lead the region in this regard. He also mentioned that it should be observed that no one tries to compromise any country’s sovereignty in the name of providing help for recovering from the pandemic, and we all know that it was directed towards China’s Debt Diplomacy.

To read more: PM Modi’s stance on Chinese ‘debt-trap’ diplomacy praised by the US.

While emphasizing on the ASEAN centrality, they also agreed for working towards realizing a common vision for the Indo-Pacific. The four countries have been actively carrying out military exercises, and they have also signed other agreements which includes the logistics agreements among each other.

To read more: Welcome Australia, US and Japan! The QUAD will be conducting a joint naval exercise in India’s backyard

The consolidation of the objectives of QUAD countries and understanding coupled with the fresh German, French and Canadian Indo-Pacific policies provide a good base for a more direct diplomatic confrontation against China. The Chinese are now scratching their heads, with no obvious way out against how QUAD has counterbalanced the Chinese aggression.

The European countries are following the same line of arguments as the QUAD, and the ASEAN members feel a fresh surge of confidence as a new countervailing force against the Chinese imperialistic ideas has taken shape. As all of them come together, Xi Jinping is left with very few options; he can either conform to the internationally accepted rules of the game or confront a united front of QUAD, ASEAN, EU and other middle power countries.

Beijing’s belligerent efforts and actions will pull it into a very bad place; the sooner Communist party realizes it the better. With the opinion of the international community about the Communist Party of China at historic low, the Chinese are now in a corner, with no way to get out of this situation.

With the QUAD now taking shape in an accelerated manner and the US Secretary of State Mike Pompeo’s push for the institutionalization of the QUAD as an organization, there appears to have emerged a new organization in lines with NATO in Europe to counter the growing hegemony and bullying attitude of the Chinese. As things stand, it looks in the future the organization could get expanded to include more countries with similar values.

From this point onwards, the Chinese have a real problem to deal with, and as was earlier too predicted by team TFI, that the world will be led by the US, India, Japan and Australia against the Chinese evil designs.

How France is leading Europe’s resistance against Chinese belligerence