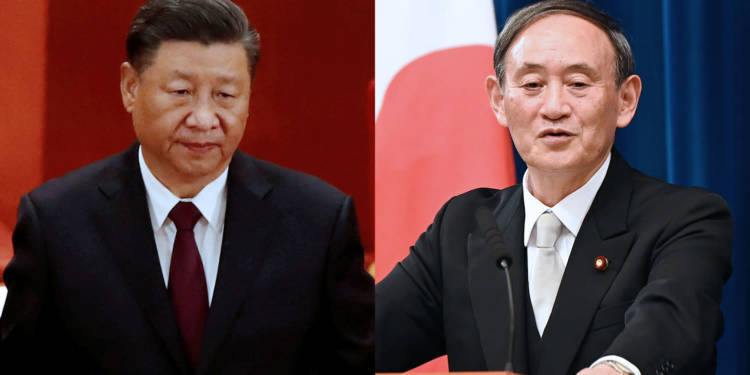 Yoshihide Suga just after assuming the position of Prime Minister, called onto the world leaders. The most interesting part of this exercise was the minuscule importance which was given to Japan’s largest neighbour, China. Suga san called Chinese premier Xi Jinping only after calling six other world leaders. Even after getting treated so badly, Beijing shamelessly coordinated with Tokyo for a visit by Chinese Foreign Minister Wang Yi.

The order in which head of state calls his/her counter-parts just after taking on their role, emphasizes the importance conferred to the fellow countries in bilateral terms. At a time when China thinks itself to be the second most powerful country, getting a call at 7th position from the newly appointed Japanese PM, is a clear insult of China. Before Xi, Suga-san called Australian PM Scott Morris, US President Donald Trump, German Chancellor Angela Merkel, UK PM Boris Johnson, South Korean President Moon Jae-in, Indian PM Narendra Modi, in the exact order.

Xi Jinping’s absurd imperialist designs and objectives placed China in such a compromising position that it has become isolated on all fronts. Making enemy with everyone but Pakistan is not a strategy any sane country would ever make. Even after getting snubbed openly by Suga, Xi Jinping has prostrated in front of Japan by remaining silent on the Suga-administration even while Japan is hosting QUAD ministerial meet.

In addition to that, Beijing is also trying hard to make the visit of Chinese Foreign Minister Wang Yi to Tokyo a success. Xi Jinping’s overly aggressive foreign policy and apparent attempts on neo-colonialism in small countries has forced the world to move away from China.Examples being, India, USA, Canada and many countries in EU among others.

To read more: China is running out of the US Dollar at a time it needs it the most

In such a vulnerable situation, Beijing cannot afford to lose Japan as their trading partner. Japan is the third-largest trading partner of China; it being 20%of Japan’s total trade in 2019. As the Japanese government is encouraging its companies to move their manufacturing bases out of China, the Xi Jinping’s China Dreams will be shattered just as they aim to clock a GDP growth rate of 5% pa.

As Japan in the ministerial level QUAD meet emphasized on the issues of East & South China Sea, it became clearer why Suga-san called all the QUAD members before dialling Beijing. Yoshihide Suga called PM Modi before Xi Jinping, it emphasizes on the fact that although China is a bigger economic and trade partner of Japan, India is a larger geostrategic partner of Japan in the gameplay of Indo-Pacific.

Even in the face of all these open signals and apparent provocations with QUAD meeting criticizing China without naming it, Xi Jinping for all the portrayal of alpha-male persona has to get on his knees, shedding all the shame just so that Japan may not destroy Chinese Economy. As per the Global Times op-ed, China has embodied its responsible image on the international stage. And added that Japan, India and Australia are aware of US unreliability (for example breach of promises, flouting international rules, and ignoring international obligations).Even in the op-ed of the most provocative mouthpiece, it shied away from provocating Japan as they are still hopeful of pulling Suga in their camp.

Chinese have become overly optimistic and are ignoring all the signs Suga-san is giving them to stop self-shaming. China is now in a corner, and it knows the world will rain punches on it after the pandemic is over. Thus, in its vulnerability, China is adamant to trying anything to pull Japan on its side and shamelessly kowtowing to Japan.

Tibet used to be an issue only for India, now 39 countries including Germany are slamming China for it