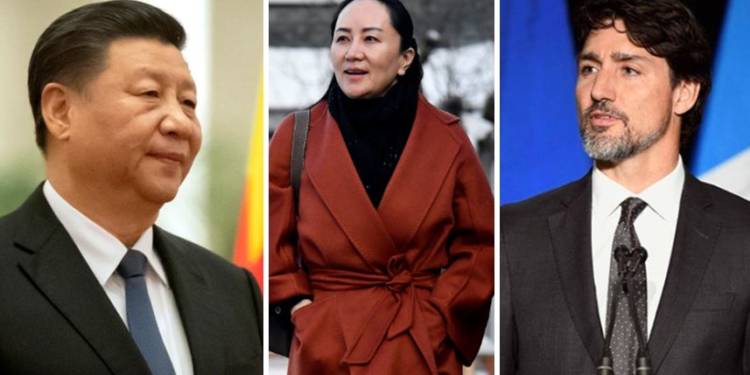 China has lost yet another battle. And this time it is the big prestige battle- the diplomatic stand-off between Canada and China over Meng Wanzhou, Chief Financial Officer (CFO) of the Chinese telecom giant Huawei, who was arrested by Canada in December 2018 on an extradition request from the United States. Nine days later, China arrested two Canadians- Michael Kovrig, a former diplomat, and Michael Spavor, a businessman, in a tit-for-tat measure.

But China has finally blinked as the US and Canada have joined hands to take on Beijing’s “hostage diplomacy”, and this comes as Wanzhou’s extradition to the US gets closer. The two Canadians in Chinese detention were not being granted consular access by Beijing since January this year. But now China has relented. According to the Canadian government, Dominic Barton, Canada’s Ambassador to China was granted virtual consular access to Spavor on Friday and virtual access to Kovrig a day later.

Grant of virtual consular access is not an act of goodwill on China’s part. In fact, Beijing has blinked in face of the diplomatic offensive coming directly from the White House. US President Donald Trump has been in touch with his Canadian counterpart Justin Trudeau. Even on Saturday, the two leaders discussed the matter of detention of Canadian nationals by China over a phone call.

According to the Canadian government, Trudeau thanked Trump for American support in “seeking the immediate release of the two Canadian citizens arbitrarily detained by China.” It is therefore clear that the US pressure has worn down China’s intent in the ongoing diplomatic stand-off over Meng Wanzhou.

Backed by the US, Canada has made renewed attempts for putting more pressure on China. In its statement, Canada said, “The Canadian government remains deeply concerned by the arbitrary detention by Chinese authorities of these two Canadians since December 2018 and continues to call for their immediate release.” Canada is clearly getting emboldened in its diplomatic stand-off against China.

China’s act of granting virtual consular access to the two Canadians is at odds with its usual position on the issue. Beijing’s message to China has thus far been very clear- release Meng Wanzhou or let the two Michaels die. Chen Weihua, the European Union (EU) Bureau Chief of the State-owned China Daily newspaper had even tweeted, “People often fail to note that Meng is worth 10 Kovrig & Spavor, if not more.”

As for China, the two Canadian nationals in its custody are nothing more than two hostages to strong-arm Canada into refusing Wanzhou’s extradition to the United States. In fact, while Canada arrested the Huawei CFO over accusations of secretly evading sanctions on Iran, China arrested Spavor and Kovrig without any concrete reason.

In China’s primitive and barbarous methods of extorting Canada, the grant of consular access or any other goodwill doesn’t really fit in. It would have made perfect sense if Beijing had continued to deny consular access to the arrested Canadians who have not been permitted visits by Consular officials ever since the Wuhan virus outbreak originated in China. This is where the role of American pressure has helped push back China.

The US has been quite vocal in the past few months when it comes to demanding the release of the two Canadians detained by China. In June, the US Secretary of State Mike Pompeo said, “The United States is extremely concerned by the People’s Republic of China’s (PRC) decision to proceed with formal charges against Canadian citizens Michael Kovrig and Michael Spavor.”

He added, “These charges are politically motivated and completely groundless.” He had also demanded the release of Canadian nationals from China’s arbitrary detention.

The US initiative has gone beyond mere statements. The Trump administration has waged its own spy wars against China. Recently, American enforcement agencies arrested four so-called Chinese students and researchers in the US over spying and visa fraud accusations. These Chinese students and researchers have been at the helm of Beijing’s campaign to steal American Intellectual Property to power China’s thriving reverse-engineering industry.

China may have started a stand-off against Canada by arresting two innocent Canadians. But it is the US and Canada who are finishing this stand-off and making China kneel before them.

Back in 1992, Joe Biden made sure that India does not get access to cryogenic tech for its space programme