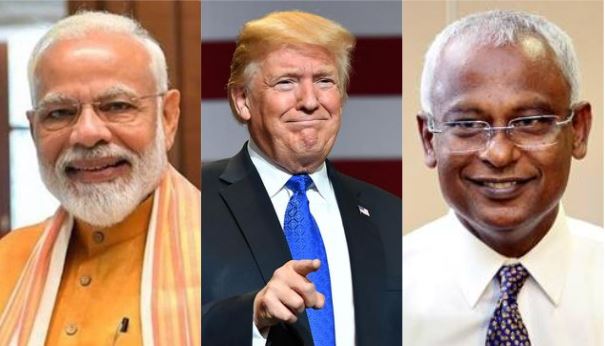 A similar status of forces agreement was floated in 2013, but because of Indian objection, it could not see the light of the day. This gives away two things: one, even after China’s repeated attempts to compromise Indian influence in the Indian Ocean Region, New Delhi still maintains its unquestioned sway over it. And two, in the last seven years, Indian & American strategic interests converged a great deal as India seems to have changed its mind.

After the signing of the agreement, the Maldives Defense Ministry released a statement, “[It] will add immense value to the excellent #US-#Maldives partnership defined by shared principles and interests in peace and security of #IndoPacific and #IOR amid rising threats like piracy and terrorism.” Here the Island nation seems to have given recognition to the term ‘Indo-Pacific’ which tries to bind the Indian Ocean, the Pacific and everything in between.

As the Indo-US strategic interests align, this US-Maldives agreement tactically destroys China’s Indian Ocean grand strategy, which was termed as “string of pearls.” The combined presence of India and the USA will overpower any military influence that China may have intended to apply on Male.

Before this, India has responded to a request of the Government of Maldives, by extending a new Line of Credit (LoC) of USD 400 million and a grant of USD 100 million for multiple projects. All in all, providing direct assistance of half a billion US dollars at a time when the nation dependent on the tourism industry is reeling from the impact of the COVID-19 pandemic.

What can be considered a dig on Beijing, Maldives parliament speaker and former President Mohammad Nasheed tweeted:

The things have changed for the better since 2018 as during (2013-18) previous Chinese puppet President Abdulla Yameen’s rule, Maldives was about to become an extended colony of China if not for the PM Modi’s neighbourhood first policy and proactively participating in the free and fair election of the Islands.

If not for the regime change, Maldives which is a 5 billion USD economy was 1.4 billion USD in debt to China (as per government figures)& as per then opposition statistics it was somewhere around 3.5 billion USD.

The Communist Party of China’s mouthpiece, Global Times carried an opinion by Long Xingchuan, a senior research fellow with the Academy of Regional and Global Governance at the Beijing Foreign Studies University, which said, “Great powers should no longer engage in setting their spheres of influence,” and “In the 21st century, countries should adhere to free, equal and mutually beneficial cooperation.” These statements are enough to establish that China has now been cornered in its Indian Ocean grand strategy, which is why it is now going around preaching the ideas which it butchers on a daily basis in the South China Sea.

After balancing the Island nation’s economic condition, the Indian government’s agreement for the US-Maldives defence agreement showcases India’s intent to make the island geopolitically impenetrable to Chinese attempts at intimidations.

Read more: Xi Jinping wanted to occupy the Maldives, but India and now US are making sure that China loses the Maldives forever

During the signing, all eyes were on the USA’s role in the Indian Ocean Island nation, but as the dust is settling, it is becoming clear that India was the one calling the shots there. Although the USA is the bigger power, the Indian Ocean is New Delhi’s backwater and whatever one wants to do here would either require to act under India’s will and wish or challenge India only to find itself lost in the long run, as China did.

India is now playing the role of a regional big brother towards its fellow Indian Ocean Region countries. By combining Neighborhood first policy, act east policy, SAGAR (Security and Growth for All in the Region) and coordinating with western friends be it the USA, France, the UK among others India can counter the Chinese adventures in the region. Now with the Indian approval, this US-Maldives defence agreement will surely be the death knell for the Chinese dreams of dominating Indian Ocean Region (IOR).

China came as an investor in Nepal and soon became the Master. Now an independence struggle has started