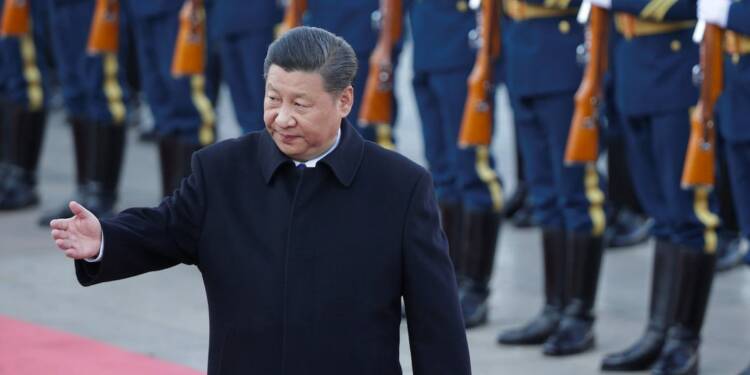 With the threat of war looming upon the paper Dragon, Chinese President Xi Jinping seems to be rattled to the extent of warning the People’s Liberation Army (PLA). Jinping has reportedly addressed the Chinese People’s Liberation Army (PLA) Navy Marine Corps. Global Times has reported that Xi has urged “the PLA Navy Marine Corps to speed up the upgrading of their combat capabilities to forge a powerful troop.”

The Chinese Communist Party mouthpiece Global Times has further reported, “Xi said the Marine Corps should focus on war preparedness and combat capabilities, and maintain a high level of readiness, adding that the force should stick to combat-oriented training and strengthen mission-oriented training tailored to the specific needs and force-on-force training.”

Xi Jinping’s ominous remarks to the Chinese marines to remain prepared come amidst the growing escalation in Western Pacific. The paper Dragon has been trying to lock horns with everyone from Japan in the East China Sea to Taiwan and Southeast Asian nations in the South China Sea. And now China’s biggest rivals are looking to take on the giant bully.

On October 6, QUAD security dialogue implied that the US confrontation with China over Taiwan can take the shape of a serious escalation. China has been making bellicose moves against Taiwan in an apparent effort to effectuate its ‘One China’ policy. However, Chinese military assets are no match for the US Navy supercarriers and destroyers deployed in the South China Sea.

And then the QUAD is also not holding back with countries like the US and India showing greater intent to dilute the ‘One China’ principle and increase engagement with Taiwan.

As for the US, it is expanding its role in the entire South China Sea region itself. Last month, the United States even demonstrated to China a unique capability – that of putting its army on the ground in South China Sea’s islands, along with all that they would be requiring to fight a full-blown war against China. As per a Forbes report, U.S. Air Force airlifters landed on a dirt airstrip on an unnamed remote Pacific island, disgorging U.S. Army soldiers. An Army landing craft beached on the same island to offload rocket launchers.

Within the Southeast Asia region, countries like Vietnam, the Philippines and Malaysia have been feeling emboldened even as the QUAD comprising India, the US, Australia and Japan have shown a willingness to play a bigger role when it comes to the South China Sea disputes. Vietnam, in particular, has shown that it will not bow down to Chinese belligerence and that it will continue to force Beijing to accept the sovereignty of other countries over their territorial waters.

China, therefore, finds itself cornered all along the South China Sea and rest of the Western Pacific. It is in this context that the Chinese President is warning the PLA marines, who apparently have no experience when it comes to warfighting and combat. This is why Jinping advised, “[You should] focus your minds and energy on preparing to go to war, and stay highly vigilant.”

Xi Jinping also said, “Marines have many different missions and the demands on you will vary,” and added, “As such [you] should base your training on [the need to] go into battle … and raise [your] training standards and combat ability.”

The Chinese President understands that the paper Dragon has pushed the envelope way beyond what it can manage. And now, China’s enemies are ready to beat it back. Jinping is thus warning his men not to lower their guard or else they will be caught napping when things spiral into an armed conflict.