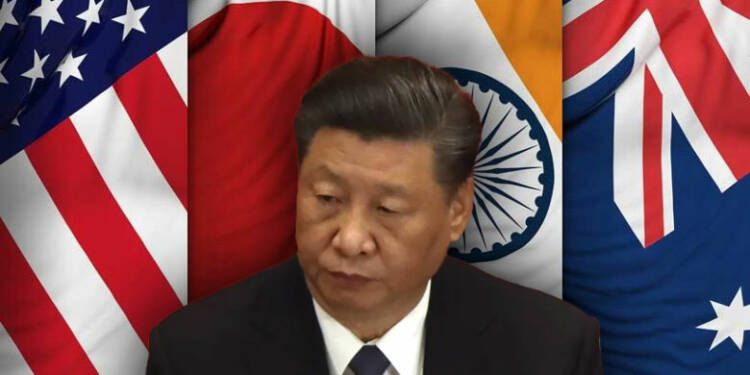 China is rattled by the QUAD. During his Malaysian trip, Foreign Minister Wang Yi suggested that Quadrilateral Security Dialogue is an attempt by Washington to create an ‘Indo-Pacific NATO’. He also warned that such an initiative would seriously undermine regional security.

China has become all the more fearful of QUAD since the production and successful 2nd ministerial level meeting in Tokyo. Before it used to make fun of the idea. In 2018, at the sidelines of National People’s Congress (NPC) when Wang Yi was asked about the QUAD, he claimed it to be a headline-grabbing idea which is like foam on the sea and for all the attention, will soon dissipate.

He stated, “What it pursues is to trumpet the Cold War mentality and to stir up a confrontation among different groups and blocs and to stoke geopolitical competition. What it maintains is the dominance and hegemonic system of the United States,” and “In this sense, this strategy is itself a big underlying security risk. If it is forced forward, it will wind back the clock of history.”

This headline-grabbing idea is now in the process of being institutionalized and in near future, it will be able to counter any Chinese misadventures as well as contain Beijing’s hegemonic designs. And Wang Yi’s statements touched upon these Chinese concerns.

China fears that institutionalized and extended QUAD might become to China what NATO was to the USSR. The major theatre of global conflict has shifted from the Atlantic to Indo-Pacific, with all the major powers releasing their Indo-Pacific strategy leading to a possible geostrategic encirclement of China.

For long the west has been divided about prioritizing their interests, and it was really visible with the sluggish attitude of recognizing the Indo-Pacific as the new theatre which needed their unhinged focus. However, since the utility and cohesion of NATO are shattering the organization itself will become redundant soon.

The current movement towards creation of multiple minilaterals, be it India-France-Australia, India-Japan-USA, Indonesia-Australia-Japan and the transformation of relations among QUAD members and the European Union as well as ASEAN member countries is the most obvious signal towards the creation of an extended QUAD, which will similarly replace the responsibility of NATO as the Atlantic theatre has been replaced by the Indo-Pacific with China being the new disrupter and colonizer.

Read more: US wants a NATO-like military alliance in the Indo-Pacific and it means the end of NATO’s relevance

NATO was established to guarantee US hegemony in North Atlantic and the accompanying region in the face of the communist threat emanating out of the USSR. NATO is part of the cold war doctrine of the western liberal democracies. However as Russia does not intend to threaten a new cold war, the need for NATO is dying out.

On the contrary, the new threat against global liberal internationalist order comes from the rise of Communist China and its hegemonic designs in the Indo-Pacific. Many analysts believe that China is pursuing a policy of replacing the USA as the Asia-Pacific hegemon, which is why it denies any claims about a second cold war as it will lead to microscopic scrutiny of Chinese actions by the USA and the western powers.

Recently, with its wolf warrior doctrine, debt diplomacy and aggressive posturing, China has implicitly declared the beginning of the Second Cold War. Making it easier for the US to start working on an Indo-Pacific security architecture as it does not need to persuade regional powers of the presence of a bully which needs to be pinned down.

Although, SEATO (South East Asia Treaty Organisation, 1954) was a flop show because it did not respond to any threat in the region and its viability diminished gradually. However, QUAD has a reason for existence as a countervailing force to Chinese imperialistic posturing. The presence of an immediate threat perception can bring countries under the QUAD leadership banner which can then transform into an Indo-Pacific NATO with Asian characteristics.

The QUAD is bound to be a success story in both containing the Chinese hegemonic designs and safeguarding the free and open Indo-Pacific. This is because, even though the USA is leading the QUAD, it has left enough space for the three Indo-Pacific countries (India, Japan and Australia) to be on equal footing when it comes to decision making. Thus, the Chinese can no longer bank upon the possibility of the USA turning inward will decimate the QUAD. It has gone above and beyond that stage and soon QUAD is bound to become an organization of like-minded countries for containing China thoroughly and create a more equitable & prosperous Indo-Pacific region.