Africa is playing a brilliant game with China 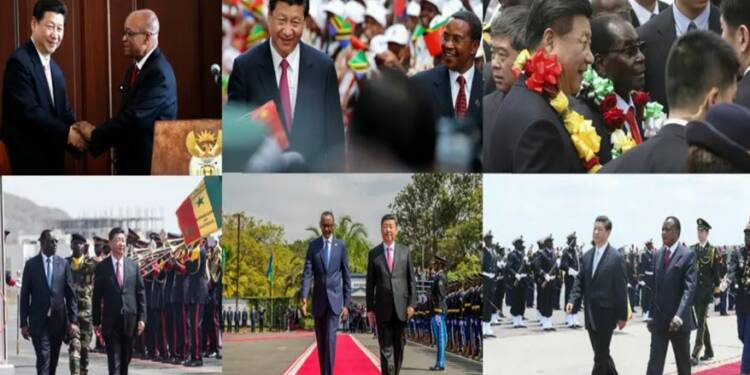 China’s attempts to take hold of the entire African continent through an extensive debt trap have been foiled in a rather brutal manner. Beijing now finds itself trapped in a peculiar situation in this part of the world and has no other option but to suspend debt of African countries.

Under pressure from G20 powers like the United States, Japan, and the United Kingdom, the World Bank has convinced Chinese authorities to suspend debt of 11 African countries under the Debt Service Suspension Initiative (DSSI).

According to a South China Morning Post report, the state-owned Export-Import Bank of China signed a debt suspension treaty with 11 African countries after months of efforts from G20 countries. In May this year, the G20 countries came up with DSSI to help 73 poor African countries and Asian countries in the fight against Coronavirus. Most of the G20 member-nations agreed to suspend the loans and interest to African countries but China, which invested billions of dollars in order to colonize the resource-rich region, was not ready to come on board.

But Coronavirus hit African countries refused to pay back the debt owed to Chinese institutions and argued that they were using that money in the fight against the Chinese virus. So, the African countries practically forced the Chinese players to sign DSSI with the help of rich G20 nations.

In an indication that Beijing has started to write off the interest-free loans, Chinese Foreign Ministry spokesperson Zhao Lijian said, “The debt relief, a commitment of the Chinese side, will help Botswana focus resources on fighting the Covid-19 pandemic and achieving economic recovery at an early date.”

Although China has started to flaunt its debt suspension to poor African countries, it has not revealed the details of the waiver yet because it wants to save as many loan programmes as it can without irking the G20 nations or the World Bank.

Last week, World Bank president David Malpass warned that non-participation from China and other private creditors had left “the debt relief too shallow to meet the fiscal needs of the inequality pandemic around us”.

Zhao Lijian further said that China was “actively responding to African concerns in accordance with the consensus reached by Chinese and African leaders and the G20 DSSI.”

Earlier we had written about how Africa has trapped China in its own BRI debt-trap. The racial attacks against black Africans in China earlier this year created resentment against Chinese investments and loans in the African continent. Media circles came to understand that the Chinese investments, including Xi Jinping’s flagship Belt and Road Initiative, were nothing but a debt trap. Africa wanted to get rid of predatory Chinese investment, but it did not have the option of going all-out unlike some of the bigger powers around the world. Therefore, African countries started what we can call more of a quid pro quo with China. At a time when Sinophobia was peaking around the world, many African countries supported Beijing on issues like ‘One China Policy’ and the brutal National Security Law in Hong Kong, which was not out of diplomatic goodwill.

In a telephonic conversation with Xi Jinping earlier, Zambia’s President Edgar Lungu asked for some debt-relief measures while also lending his country’s support to Beijing’s ‘One China Policy’.

Zimbabwe, for example, has tried to save 50 million US dollars from the debt relief offered by China. Other countries like Angola, Sudan and the Republic of Congo (Brazzaville) have also supported China’s brutal crackdown in Hong Kong and at the same time demanded debt relief.

The debt suspension for African countries puts trillions of dollars of Chinese investment across the world under Xi Jinping’s ambitious BRI at risk because now every country will blame the Coronavirus for the inability to pay back Chinese debt. Many poor Asian countries are also part of DSSI and they might refuse to pay back China like Papua New Guinea. This will encourage many others to do the same.

The economy of almost every country is suffering from Coronavirus while China claims to be growing. Every country would make the argument to China that- You spread the Coronavirus and you are growing while our economy is shrinking due to the pandemic so why should we pay back your loans?

The debt suspension to African countries is set to be followed by Central Asian countries which are also burdened with Chinese debt. Well to do Southeast Asian countries like Malaysia, Indonesia might refuse to pay back Chinese loans, and Beijing’s all-weather ally, Islamabad, would also try to capitalise on this opportunity.

Pakistan is burdened with around 50 billion dollars in Chinese debt, none of which it is able to reservice given dwindling foreign reserves and southward movement of the macroeconomy. A few months ago China put a break on CPEC loans because the Pakistani administration used the money for ‘other purposes’. The debt suspension to African countries by China gives a golden opportunity to Pakistan to ask for the same treatment because its economy is no better than that of poor African nations.

BRI is already dead due to the Coronavirus pandemic and now the already invested money is also at risk as country after country refuses to pay back loans. China, under Xi Jinping, has cost heavily to the Chinese people and led to the loss of billions of dollars, making the collapse of the Communist regime imminent.