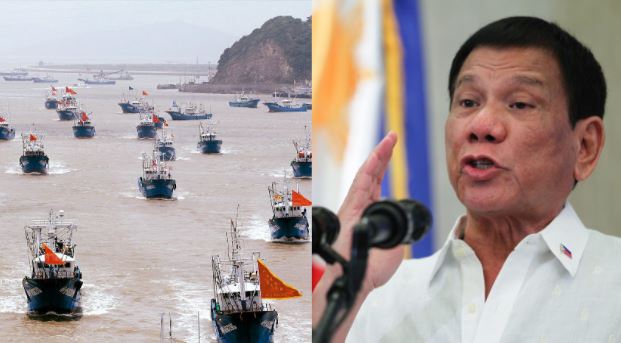 The Philippines is considering giving China a taste of its own medicine by raising and deploying its own maritime militia to counter China’s fishing boat militia in the territorial waters of the South China Sea to fend off hostile Chinese incursion movements. According to a report in Rappler.com, the Philippine Navy is preparing to send over 200 militiamen to the West Philippine Sea to execute patrols and protect fishermen who have long been harassed by encroaching Chinese forces.

Philippine military officials said the maritime militias would be modeled on the army-run Citizens Armed Forces Geographical Unit, or Cafgu, which was set up in 1987 to fight communist rebels and is still in operation. “The purpose of this is response to the Chinese, to their maritime militia in the West Philippine Sea,” said Navy chief Vice Admiral Giovanni Carlo Bacordo.

Filipino fishermen have been the victims of harassment by Chinese naval and militia forces for years. In June last year, a Chinese trawler had rammed into a Filipino fishing vessel and later abandoned its 22 crew members to float in cold water, sparking a major controversy between the two countries.

China routinely intrudes into the territorial waters and the Exclusive Economic Zones (EEZs) of countries including the Philippines in the South China Sea. But the Duterte administration so far had largely stuck to the diplomatic and legal channels to resolve the issues. In June, the Philippines Foreign Secretary Teodoro Locsin Jnr had disclosed that President Duterte had raised the issue of incursions with Chinese President Xi Jinping, but “the reception was very cold”.

The Southeast Asian country even secured a favorable ruling against China from the Permanent Court of Arbitration in The Hague over the South China Sea disputes. However, Beijing refused to accept the judgment and continued with its untoward policy of expansionism in the waterways by claiming “historical maritime rights” under the ‘Nine-dash claim line’ theory in utter defiance of the international maritime law, that is, the UN Convention on the Law of the Sea.

Perturbed by the developments, Locsin had then shot out a stern warning to the Politburo of Beijing saying, “The Philippines will invoke its 69-year-old defence treaty with the United States if China attacks a Philippine naval vessel in the West Philippine Sea.”

According to a news report in The Diplomat, USA’s former Chief of Naval Operations Admiral John Richards had warned his Chinese counterpart, Vice Admiral Shen Jinlong, that the United States was well-aware that China uses its militia fishing fleet to push its illegal claims in the East and South China Seas.

Reported extensively by TFI, the maritime militia of China is a paramilitary force trained by the Chinese navy to engage in “patrol, surveillance, resupply, and other missions to bolster China’s presence in contested waters.

Most of the maritime militia vessels operate on high seas and are usually engaged in commercial fishing, but are routinely called on to assist the PLA-Navy or China Coast Guard (CCG). Broadly construed, these forces are styled as the People’s Armed Forces Maritime Militia (PAFMM) and operate as a Third Sea Force of China.

Most of China’s militia vessels are indistinguishable from its ordinary fishing fleet, hence masquerading as a fishing boat and attacking the enemies is a relatively easier task. China’s maritime militia was also believed to be behind a series of laser attacks against an Australian naval helicopter over the South China Sea, last year.

Reported by TFI, it was the Chinese Militia that had come perilously close to the Galapagos Islands, the archipelagos where Charles Darwin discovered the theory of evolution. The discovery of the Chinese fleet had sparked fears for the protected region’s diverse ecosystem and delicate marine life.

It's been reported to us that hundreds of Chinese fishing vessels are currently forming a line below the Galapagos Islands. We are watching the destruction of the ocean in real time. https://t.co/6IfmuhJRdo pic.twitter.com/ZunJurJRQd

The other reason these Chinese fleet boats travel thousands of miles is to satiate the hunger of ordinary Chinese. In a greed to emerge as a superpower of the world, China in the last few decades has completely destroyed its aquatic ecology by including in rampant offshore drilling and using unsustainable fishing practices like trawling. China’s fishing stock has reached such alarming lows that it has resorted to stealing now.

Read: The voracious appetite of the Chinese for fish is turning oceans and seas across the world fish-less

Duterte used to be one of the biggest admirers of Xi Jinping and his red communist regime but with Beijing continuing its attacks on the sovereignty of the Philippines, even a hardliner like Duterte had to change his stance and go on an offense against China. The entire episode proves one thing and that is no country can trust Beijing, as one way or another Xi Jinping will bite you in the back. Attack is the best form of defense and the Philippines is looking to give China a black-eye in the region.

After removing its pro-China defence minister, Nepal begins a battle against China at the border