China fans separatism in India. Bad move. India can press any of its 3 raw nerves any moment 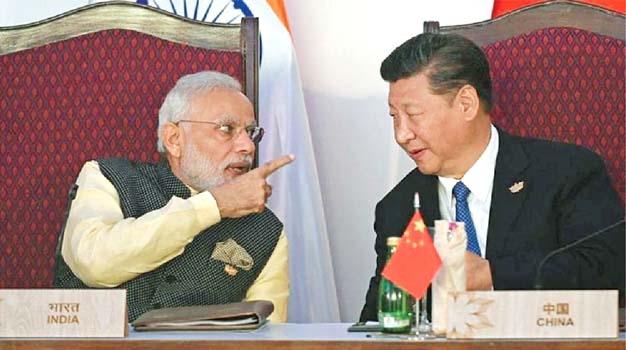 While India is not letting China have its way along the Line of Actual Control in Eastern Ladakh, the Chinese State media has committed yet another blunder. The Chinese Communist Party (CCP) mouthpiece Global Times has published a rather provocative story titled, “India to invite trouble playing Taiwan card.” The “trouble” which the CCP mouthpiece is talking about is separatism in India’s Northeast.

Crossing the red line, Global Times has said, “If India takes the move to support “Taiwan independence,” China has every reason to support separatist forces in Northeast Indian states such as Tripura, Meghalaya, Mizoram, Manipur, Assam and Nagaland. Beijing could even support the resurrection of Sikkim.” Threatening India with separatism in its Northeast is a suicidal step on Beijing’s part. It is opening up the Pandora’s box for itself by openly playing the separatism card.

What does China think? Does the Xi Jinping administration believe that it can start talking about separatism and New Delhi will not pull any strings? Beijing should understand that if it tries to openly create trouble in India, China’s occupied and brutally oppressed territories of Tibet, Xinjiang and Hong Kong could erupt with massive freedom movements too. India will have every reason to support such freedom movements- both diplomatically and otherwise.

And what is China’s excuse for supporting ‘separatism’ in India’s Northeast? Global Times says, “The Taiwan question is not a card that India can exploit as a bargaining chip toward China over the border issue. India’s recognition of the one-China principle and commitment not to support “Taiwan independence” forces have been reciprocated by China’s promise not to support the separatist forces in India.”

We do agree that Taiwan is not a “card”. It is a democratic nation in the Indo-Pacific that must foster closer ties with New Delhi for natural reasons. What can India even do with Taiwan? It is an independent nation that China cannot occupy anyway.

And as for China’s “promise not to support the separatist forces in India.” India doesn’t need any promises. The Northeastern states are an integral part of the Union of India that have absolutely no relation with the so-called ‘One China’ policy. India will punish China if it tries to intervene in Northeastern states, even after New Delhi decides to officially abandon the ‘One China’ policy.

And for the record, China has been trying to support insurgent Northeastern leaders, but India has been able to overcome China’s devious methods.

Chinese policy-makers seem to be having some bizarre thoughts here. They are somehow trying to find a justification to warrant illegitimate Chinese intervention in India’s Northeast. Global Times stated, “The races in India’s Northeast are different from those in mainland India. Some of the states belonged to an independent country or were not part of India and some were part of Myanmar before the British colonial rule (1858-1947). Only after Britain left India, these regions became part of Indian territory.”

Really? Should it be China talking about racial divisions and expansionism? Beijing must get it straight- the Indian State is a democratic state that doesn’t believe in racial domination, unlike China’s Han domination policy. The Indian State doesn’t pursue the policy of trafficking organs, raping women, forcing abortions, murdering monks and running the so-called “re-education camps”, in order to wipe out entire races, unlike China.

Indian nationalism isn’t as hollow as Chinese Han domination and revisionism. And the Northeastern states that Global Times is talking about are therefore well-assimilated in the Indian system. So, if anyone should be worried about separatism due to racial differences, then it has to be China.

It is the Chinese Communist Party and its armed wing- the People’s Liberation Army (PLA) that has gobbled up entire countries like Tibet, East Turkestan (called Xinjiang by China) and Inner Mongolia, apart from grabbing illegal and excessive control of Hong Kong.

And China’s occupied territories are not irrelevant by any stretch of the imagination. Tibet would have been the tenth-largest country in the world had it not been occupied by China, is spread over an area of 2.5 million square kilometres. Xinjiang too is a massive region, covering 1.665 million square kilometres of area. Losing these two territories would alone lead to China losing more than one-third of its total territory.

None of the racial minorities in China- the Mongols, Turkic Muslims (Uyghurs in Xinjiang) or the Tibetan Buddhists, have any connection with the Han Chinese majority. If Beijing tries to meddle in India’s Northeast, then New Delhi will simply have no choice but to liberate the Tibetan Buddhists from China and step up the heat in Xinjiang also. The pro-democracy protesters in Hong Kong too could seek help from the world’s largest democracy- India.

China must understand that it is at a disadvantage here. India is now going to be assertive about its territorial sovereignty and integrity. If China dares spark separatism in India’s Northeast, then the paper Dragon could find its own political map getting abridged in a rather unsavoury manner.