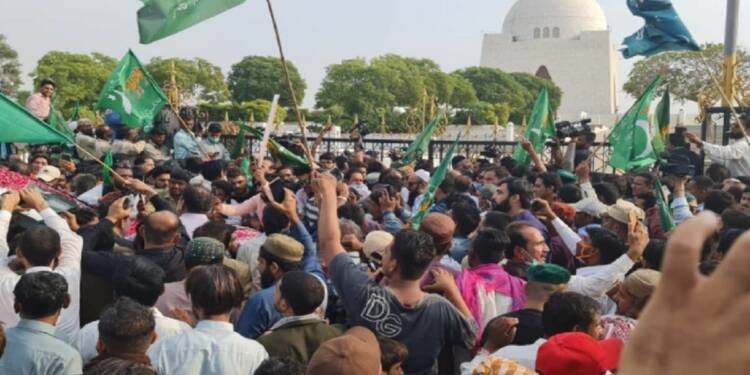 Trouble is brewing in India’s neighbouring country Pakistan where a civil war-like situation has started emerging. Pakistan Army Chief General Qamar Javed Bajwa and his army of minions have ratcheted up the entire controversy after it came to light that Sindh police chief Mushtaq Ahmed Mahar was abducted and kept in detention for over four hours so that he could be coerced to arrest Captain (retd) Muhammad Safdar, a PML-N leader from his hotel room in Karachi on Monday. Safdar is the son-in-law of exiled former Prime Minister Nawaz Sharif.

Safdar, who was in Karachi along with his wife Maryam Nawaz to attend the Pakistan Democratic Movement’s (PDM) rally, had allegedly chanted slogans like “Give respect to the vote!” at the mausoleum of Quaid-i-Azam Muhammad Ali Jinnah when he paid a visit to the place on Sunday along with other party leaders ahead of the rally.

Reportedly, these slogans are viewed in Pakistan as a strong criticism against Pakistan’s military, which has often ruled Pakistan directly or indirectly for the last seven decades. Consequently, an FIR was registered against Safdar, Maryam and 200 others for ‘violating the sanctity’ of the grave.

Maryam had said that Karachi police then broke open the door of the hotel room where she was staying and arrested Captain Safdar.

Police broke my room door at the hotel I was staying at in Karachi and arrested Capt. Safdar.

As soon as the news of the abduction of Sindh’s police top boss reached his subordinates, the entire force started standing up in solidarity and turned in their leave applications as a way to show their dissent.

An application signed by AIG Special Branch Imran Yaqoobwent viral on the social media platforms where he wished to proceed on leave because the police high command had been “ridiculed and mishandled”, leading to demoralisation within the Sindh police.

An overwhelming response from Sindh Police to Deep State. pic.twitter.com/0NWVXiGMsh

The Twitter handle of Sindh police narrated the entire incident where the top officers of the force were humiliated. The incident had “caused great heartache and resentment within all ranks of Sindh Police”, as read one of the tweets of the Sindh Police.

The unfortunate incident that occurred on the night of 18/19 October caused great heartache and resentment within all ranks of Sindh Police.

According to The International Herald, 10 Karachi police officers were then killed in clashes that broke out in the financial capital of Pakistan. It also claimed that a ‘civil war’ had broken out following the violent clashes between police and the Army.

However, in a strange turn of event, news reports started coming out hours later that General Bajwa had finally ordered an inquiry into the abduction of Sindh police chief and the subsequent arrest of Safdar.

“Taking notice of Karachi incident, the COAS has directed Karachi Corps Commander to immediately inquire into the circumstances to determine the facts and report back as soon as possible,” a statement issued by the Inter-Services Public Relations (ISPR) said.

The calling of an inquiry is a classic Catch-22 situation for Bajwa—if he does take action against his own army then he will have to face massive embarrassment, however, if he doesn’t take any action, then the Sind police can go rogue and it could be the starting of the fragmentation of Pakistan into smaller territories.

Only after Bajwa gave assurances to the Sindh Police department, Mushtaq Ahmed Mahar deferred his own leave application and ordered his subordinates to turn up to work.

There have been several reports coming out of tanks rolling into the city but none of them can be confirmed as the Pakistani Media has observed a radio-silence over the events of the last two-three days. It is being insinuated that the Pakistan Army has taken over the media and only thoroughly rechecked sifted news is coming out from Islamabad.

The opposition leaders have taken it as an opportunity to target the fragile state machinery and called for the army to vacate all tehsils, districts, towns, and divisions and stop interfering in civilian matters of Govts and Police.

Maulana Fazal-ur-Rehman issues warning to Pakistan Army to vacate all tehsils, districts, towns and divisions and stop interfering in civilian matters of Govts and Police or else there will be no unity in the country. Indicating consequences. pic.twitter.com/nresRYz1Yp

Sindh could prove to be the beginning of the end for Pakistan as we know. The top political leadership of Imran Khan has already submitted itself in front of the Pakistan Army and now Bajwa is being put under pressure by his own provincial police force.