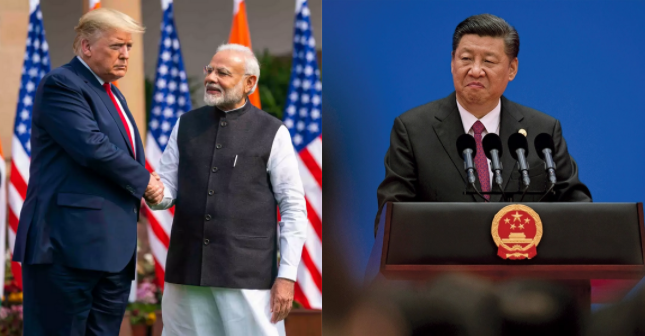 The India-US relations have never been closer and the last leg of 2020 is about to become a defining moment in the relationship of these two democracies. India is likely to sign the Basic Exchange and Cooperation Agreement (BECA) for geospatial cooperation with the USA.

The agreement is supposed to be signed during the 2+2 dialogue between the foreign and defence ministers of the two countries, which is scheduled to be held on 26th&  27th October in the Indian capital of New Delhi. This agreement will make India a US military ally in all practicalities.

This is coming at a time when Chinese false pride has led to 18 rounds of failed border talks between India and China. The Indian government has now shed all façade of neutrality as Xi Jinping misunderstood PM Modi’s friendly behaviour as a weakness. This agreement may well become the Knock Out punch to an already battered China.

As per India Today, a government source said that “We are hoping to sign the BECA during the meeting between US Secretary of State Mike Pompeo and Defence Secretary Mark Esper and their Indian counterparts including External Affairs Minister S Jaishankar and Defence Minister Rajnath Singh. The agreement will ensure that the armed forces of the two countries start talking to each other on enhancing geospatial cooperation.”

The BECA agreement will further enhance the interoperability of the two militaries and the two countries will be able to share geospatial information & intelligence helpful for defence-related issues. For example, it can help India track Chinese border buildup better as well as increase the accuracy of Indian missiles.

The visit of Indian Army Vice Chief Lt Gen SK Saini to the US Indo-Pacific Command in Hawaii is significant for the above development, as he held talks with senior American military commanders on ways to enhance strategic cooperation between the two forces.

Chinese have been frustrated because their analysis of Indian response has fallen face down. India has, instead of kowtowing to China, been punching jabs and beating it black and blue in all realms. India has increased the infrastructural development at the border and has become explicitly pro-Tibet. India is also intimidating China against interfering into internal matters if it doesn’t want India to do the same.

Read more: ‘You meddle in my internal affairs, we will meddle in yours,’ India’s message to China is loud and clear.

India has started talks with Taiwan for possible trade deals in open defiance to the One China Policy and borderline making mockery of it.

Read more: India makes a mockery of the One China policy by getting into a trade deal with Taiwan.

China’s frustration has been very well articulated by Global Times, Communist China’s official mouthpiece. In one of their article, they said “As a saying goes, a biting dog doesn’t bark. India is, as a matter of fact, making genuine efforts to institutionalize US-India military cooperation by pretending to keep a low profile in its diplomatic rhetoric.” It added that the agreement is targeted towards Beijing.

The frustration is apparent by the tone of their article, and while degrading India, they are not making sane observations. India is a majestic Bengal Tiger, which otherwise minds its own business but if someone tries to entre into his domains, it rips them into pieces.

This agreement, if looked in the backdrop of the relations among the QUAD member countries, becomes all the more significant. After signing it, all three of the four members of the quad will become military allies of the USA and if anyone was not sure of quad being institutionalized, then this should clear all doubts.

The agreement needs to be seen as a landmark in the 21st century as it has empowered India to cooperate with the USA more closely and work with fellow democracies to look out for the interests of India and the whole Indo-Pacific.

The USA and India relations are going to see a new sunrise as India moves out of its Non-Aligned past. The analysts have long contemplated the idea that India-US friendship will be a defining relationship of the 21st century and with all that is going on, the proposition sounds quite possible. The 2+2 dialogue of 2020 will be a memorable one as it will be laying the groundwork for the geopolitics of years and decades to come.