It's not looking good for Erdogan 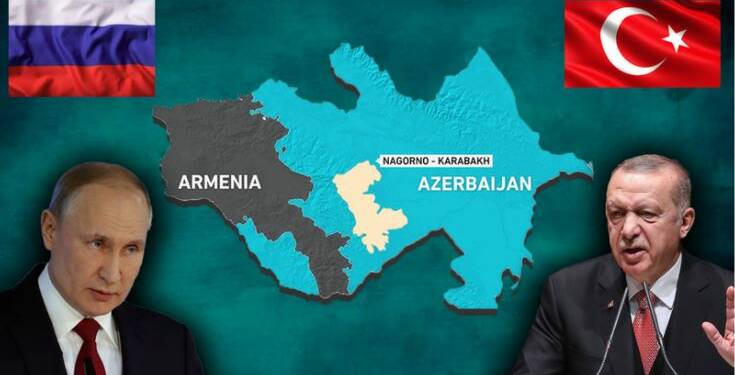 The ongoing Nagorno-Karabakh conflict is taking the shape of another usual Russian-Turkey conflict in West Asia- Turkey provokes and Russia cuts it to size. Till now, Turkey-backed Azerbaijan was making significant gains against Armenia with the help of Turkish drones. While the Kremlin was still weighing its options, it seemed as if Turkey and Azerbaijan would overpower Armenia. But now there are reports of Russia entering the conflict and turning tables against Turkey and Azerbaijan.

As per a latest Eurasian Times report, Russian media outlets suggest that the Russian military has downed nine Turkish Bayraktar TB-2 drones which were flying close to Russia’s Gyumri military base in Armenia. The drones shot down by Russia were deployed by Azerbaijan against Armenian military targets in the disputed Nagorno-Karabakh territory. However, by downing the Turkish drones, Moscow seems to have entered the conflict and now we are headed towards an open confrontation between Russia and Turkey.

Till now, Turkey seemed like the only power dominating the conflict. Ankara had sent in Syrian Jihadist mercenaries to fight for Azerbaijan. Even more importantly, Ankara backed up Baku’s forces with combat drones. Bolstered by Turkish as well as Israeli drones, Azerbaijani forces were relentlessly destroying Armenian armour despite camouflage attempts.

As such Azerbaijan and Turkey were also winning the psychological war, as videos of Armenian tanks being easily destroyed by armed drones. However, Russia might have shifted the momentum of the Nagorno-Karabakh conflict here. According to a Russian news agency Avia.pro, Russians used their Electronic Warfare (EW) weapon, the Krasukha-4 system, to deactivate the control system of Turkish drones and shoot them down.

But if Moscow starts using its cutting-edge Electronic Warfare weapon- Krasukha-4 system, then it would certainly be a matter of worry for Turkey. The Krasukha-4 system is capable of making enemy planes and UAVs “blind and deaf,” and taking them down effortlessly. In fact, the highly advanced system has a massive range of 300 kilometres.

As per reports, Russia’s Electronic Warfare systems have readied for combat since the commencement of Nagorno-Karabakh hostilities themselves. Moreover, Eurasian Times has reported that photographs of downed Turkish drones corroborate that they were actually shot down from an electronic warfare system, and there are no signs of a missile strike.

The reports of Turkish drones getting shot down, after coming very close to Russia’s military base in Armenia also give Putin a valid excuse for backing Armenia against Turkey and Azerbaijan. Armenia is a key Russian ally, and ever since Azerbaijan and Armenia started exchanging blows, everyone was keen to find out if Moscow would intervene.

Within Russia, Putin was giving mixed signals. The Russian President kept arguing that although Armenia is part of the Collective Security Treaty Organization or CSTO, the disputed region of Nagorno-Karabakh is not a part of it. Therefore, he implied that Moscow would not intervene unless Armenian soil gets involved in the conflict.

However, Turkey and Azerbaijan seem to have given Moscow the excuse to get involved in the ongoing Nagorno-Karabakh conflict. Earlier this month, there were reports about Azerbaijan possibly destroying a S-300 battery on Armenian soil. And now Turkish drones flew a bit too close to Russia’s military base in Armenia.

As the fight spills onto the Armenian soil or reaches too close to the Russian military base, Putin can start arguing that the CSTO should be invoked or that Moscow has to jump into the conflict for safeguarding its own interests in Armenia.

Nagorno-Karabakh is thus putting Turkey and Russia on a collision course all over again. This should send warning bells ringing for Ankara, as every time Russia and Turkey cross swords, it is Erdoğan who ends up prostrating before Putin. The same thing happened in Libya and Syria recently, as Russia joined the battle zone after Turkey, but ultimately gave a bloody nose to Turkish mercenaries.

Russian weapon systems can easily gobble up Turkish drones and ultimately turn the tide of battle. Also, it seems that Turkey and Azerbaijan have unwittingly ended up getting Moscow involved in the ongoing dispute. By shooting down Turkish drones, Putin might have as well announced the beginning of an open confrontation between Russia and Turkey in the South Caucasus.

After Japan’s mass exit from China, EU could be looking to “diversify” its businesses operating in China too