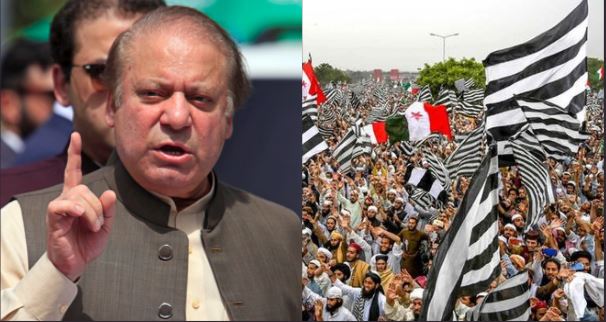 Speaking at a PDM rally in Quetta, Balochistan, Pakistan’s former Prime Minister Nawaz Sharif once again opened up about the Kargil War and said how he was blindsided by then Pakistan’s Army chief, General Pervez Musharraf. Sharif said that the decision to fight the superior Indian forces in Kargil was the call of a few generals and that he wasn’t privy to the information.

“People who were responsible for the deaths of hundreds of our soldiers in Kargil. It was a call by few generals. We were thrown into war. It was painful for me to learn when our soldier at peaks, let alone food, didn’t have weapons. Lives were sacrificed. But what did the country or community achieve?” said Nawaz Sharif.

Sharif didn’t hold back and took Pervez Musharraf’s name in the open and said that Musharraf used the Pak Army for his personal gains.

“The forces behind Kargil were the same forces who, to save face on October 12, 1999 plotted coup in the country and martial law was declared. Pervez Musharraf and his cohort used the army for personal gains,” added Sharif.

The country has been plagued by the rot of terrorism and the puppet governments that are installed in the name of democracy by the army, only work to serve the Pakistani generals who pull the strings from behind.

Nawaz Sharif is a decent political leader, who, during his tenure was not a complete stooge of the military establishment in Pakistan. From time to time, Sharif stood up to the Pakistani Army and ISI to assert himself as the rightful leader of the country, elected to the position by the public.

This was reason enough for the Army and ISI to get rid of the man, and replace him with a stooge – Imran Khan, who was made to win the Pakistani elections after heavy rigging.

Sharif knows this fact and consequently, he has minced no words to take on Chief of Army Staff Qamar Bajwa either. “General Bajwa stole the mandate of 2018 Pakistani elections. He made Imran Niazi as Pakistan prime minister which goes against the mandate.” said Sharif in the same rally.

This was the second time that Sharif has publically taken the name of the country’s powerful army chief, and has spoken about his involvement in Pakistani politics. Usually, taking Army Chief’s name out in the open is considered a political suicide in the country but Sharif has had enough of the corrupt Pakistan military.

In the past, Nawaz Sharif has admitted the role of Pakistan in the dastardly Mumbai attacks and openly called out the perpetrators of the attack to have operated from Pakistani soil.

“Militant organisations are active. Call them non-state actors, should we allow them to cross the border and kill 150 people in Mumbai? Explain it to me. Why can’t we complete the trial?” the former Premier had said in an interview to a Pakistan Daily.

Back then, Pakistan’s National Security Committee had hurriedly rejected his comments as a desperate attempt to save its face on the global map.

Nawaz Sharif understands that having bad blood with India has only brought misfortune to his country. Since the 2008 Mumbai Terror attacks, Pakistan has been dubbed as the safe haven for terrorist activities by the world media and politicians alike, barring few countries like China. It is one of the reasons Pakistan is still on the grey list of FATF and staring at a potential promotion to the black-list. The economy of the country is on a downward slope for long and the severing of the ties between India and Pakistan has hurt the latter on the economic front badly.

Such has been the fear of India that after the Balakot airstrikes, a panic-stricken Pakistan had to close its airspace for a considerable amount of time. Pakistan’s aviation minister has said on record that the country suffered a loss of 8.5 billion Pakistani rupees (Rs 366 crore or $53 million) because of its decision to close its airspace. This is one of the many examples where having animosity with India has only backfired for Pakistan.

Sharif by regularly bringing up the Kargil attacks and the Mumbai terror attacks is looking to extend the olive branch to the Indian government that if his coalition comes back into power, then he would like to make amends for the previous mistakes.

Sharif has finally found the spine to take on the Pakistani establishment at the fag end of his political career. He has been buoyed by the support of his daughter and several opposition political parties. Army Chief Qamar Javed Bajwa nearly started a civil war in the country by kidnapping the Sindh Police chief and as things stand, Pakistan is in an extremely delicate position. Nawaz Sharif is being eyed as the next Prime Minister of Pakistan and if the Army tries to force its way through again, then the public could go rogue this time.